Senior judge who oversaw the Court of Exchequer in Ireland

The Chief Baron of the Irish Exchequer [1] [2] was the Baron (judge) who presided over the Court of Exchequer (Ireland). The Irish Court of Exchequer was a mirror of the equivalent court in England and was one of the four courts which sat in the building which is still called The Four Courts in Dublin.

The title Chief Baron was first used in 1309 by Walter de Islip. In the early centuries of its existence, it was a political as well as a judicial office, and as late as 1442 the Lord Treasurer of Ireland thought it necessary to recommend that the Chief Baron should always be a properly trained lawyer (which Michael Gryffin, the Chief Baron at the time, was not).

The last Chief Baron, The Rt Hon. Christopher Palles, continued to hold the title after the Court was merged into a new High Court of Justice in Ireland in 1878, until his retirement in 1916, when the office lapsed. [3]

Chief Barons of the Irish Exchequer

Christopher Palles, was an Irish barrister, Solicitor-General, Attorney-General and a judge for over 40 years. His biographer V.T.H. Delany describes him as "the greatest of the Irish judges". He served as the last Lord Chief Baron of the Exchequer from 1874 until his retirement from the bench in 1916.

The Recorder of Dublin was a judicial office holder in pre-Independence Ireland. The Recorder was the chief magistrate for Dublin, and heard a wide range of civil and criminal cases. From information given during a debate on the duties of the Recorder in the English House of Commons in 1831, it seems that he sat twice a week, with extra sessions as and when the workload required. His chief responsibility was to keep the peace, and he also controlled the number of pubs in the city. The duties were so onerous – by the 1830s the Recorder was hearing roughly 2,000 cases a year – that some Recorders sought promotion to the High Court bench in the belief that the workload there would be lighter. The Recorder also acted on occasion as a mediator in conflicts between the central government and Dublin Corporation.

The Lord President of Connaught was a military leader with wide-ranging powers, reaching into the civil sphere, in the English government of Connaught in Ireland, in the sixteenth and seventeenth centuries. The office was created in 1569, and in 1604 was reconstituted with full powers to hear all civil suits, to impose martial law and to proceed with "fire and sword" against the King's enemies. The width of his powers gave rise to clashes with the longer established courts: in 1622 he and the Lord President of Munster were ordered not to "intermeddle' in cases which were properly within the remit of those courts. He was assisted by a council whose members included the Chief Justice of Connacht, one or two associate justices and the Attorney General for the Province of Connacht. The office was abolished in 1672.

John Egan (1750?-1810) was an Irish barrister, politician, and chairman of Kilmainham, County Dublin. 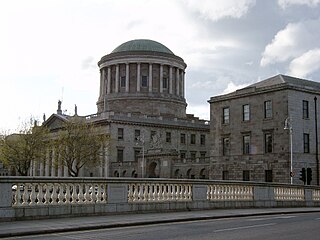 Henry Burnell was an Irish judge and politician; he served briefly as Recorder of Dublin and as a justice of the Court of King's Bench. Though he was willing to accept Crown office, he spent much of his career in opposition to the Government. He was one of the leaders of the protest against the policies of the Lord Deputy of Ireland Sir Henry Sidney in the late 1570s, and as a member of the Irish House of Commons in the 1580s, he successfully opposed Sidney's successor, Sir John Perrot. In the early 1600s, he was one of the leaders of the protest against strict enforcement of the Penal Laws. His professional reputation was gravely damaged in his later years when he was convicted and fined for having altered a deed concerning the proper disposition of the 11th Earl of Kildare's estate. He was the grandfather of the playwright Henry Burnell.

William de Skipwith was a fourteenth-century English judge, who also served as a judge in Ireland. He held the office of Chief Baron of the Exchequer 1362-5. He suffered temporary disgrace when he was removed from office for corruption, but he was restored to favour, became Lord Chief Justice of Ireland 1370-2, and later returned to the English bench. He appears to have been the only High Court judge to have escaped impeachment by the English Parliament of 1388.

The Burnell family were a Dublin family who were prominent in Irish public life and in the arts from the fourteenth to the seventeenth century. They acquired substantial estates in County Dublin, and married into the Anglo-Irish aristocracy. They produced several judges and politicians, a leading playwright, and one of the first female Irish poets. They were staunch Roman Catholics, who opposed the Penal Laws, and supported the Irish Confederacy in the 1640s. They forfeited most of their lands after the failure of the Confederate cause, and never recovered them.

Sir John Brereton (1576–1629) was an English-born lawyer who held office in Ireland as Serjeant-at-law.

Sir William de Essendon, de Estdene or Eastdean was an English-born cleric, lawyer and Crown official, much of whose career was spent in Ireland in the reign of Edward I of England. He served twice as Lord High Treasurer of Ireland, and had a high reputation for integrity and efficiency.