In the military of classical antiquity, a clipeus (Ancient Greek: ἀσπίς) was a large shield worn by the Greek hoplites and Romans as a piece of defensive armor, which they carried upon the arm, to protect them from the blows of their enemies. It was round in shape and in the middle was a bolt of iron, or of some other metal, with a sharp point. [1] The clipeus was more-or-less identical to the earlier aspis.

Pliny the Elder also describes the custom of having a bust-portrait of an ancestor painted on a clipeus, and having it hung in a temple or other public place. From this round bas-reliefs in a medallion on sarcophagi and in other forms are known as clipeus portraits. [2]

The clipeus was used by Romans during Roman Kingdom and early Republic but was replaced by the legionary scutum , a convex rectangular shield, in the later Roman Republic. However, the scutum disappeared during the Crisis of the Third Century. All troops adopted the auxiliary oval (and sometimes round or hexagonal) shield ( parma or clipeus). [3] Shields, from examples found at Dura-Europos and Nydam Mose, were of vertical plank construction, the planks glued, and faced inside and out with painted leather. The edges of the shield were bound with stitched rawhide, which shrank as it dried improving structural cohesion. It was also lighter than the edging of copper alloy used in earlier Roman shields. [4]

The Clipeus virtutis, Latin for "shield of bravery", was awarded to Augustus for his "courage, clemency, justice and piety" by the senate and displayed in the Curia Julia. [5]

Hoplites were citizen-soldiers of Ancient Greek city-states who were primarily armed with spears and shields. Hoplite soldiers utilized the phalanx formation to be effective in war with fewer soldiers. The formation discouraged the soldiers from acting alone, for this would compromise the formation and minimize its strengths. The hoplites were primarily represented by free citizens – propertied farmers and artisans – who were able to afford the bronze armour suit and weapons. Most hoplites were not professional soldiers and often lacked sufficient military training. Some states maintained a small elite professional unit, known as the epilektoi ("chosen") since they were picked from the regular citizen infantry. These existed at times in Athens, Argos, Thebes, and Syracuse, among others. Hoplite soldiers made up the bulk of ancient Greek armies.

The pilum was a javelin commonly used by the Roman army in ancient times. It was generally about 2 metres long overall, consisting of an iron shank about 7 millimetres (0.28 in) in diameter and 60 centimetres (24 in) long with a pyramidal head. The shank was joined to the wooden shaft by either a socket or a flat tang.

The scutum was a type of shield used among Italic peoples in antiquity, and then by the army of ancient Rome starting about the fourth century BC. The Romans adopted it when they switched from the military formation of the hoplite phalanx of the Greeks to the formation with maniples. In the former, the soldiers carried a round shield, which the Romans called a clipeus. In the latter, they used the scutum, which was a larger shield. Originally it was an oblong and convex shield. By the first century BC it had developed into the rectangular, semi-cylindrical shield that is popularly associated with the scutum in modern times. This was not the only shield the Romans used; Roman shields were of varying types depending on the role of the soldier who carried it. Oval, circular and rectangular shields were used throughout Roman history.

Imago clipeata is a term in art usually used in reference to the images of ancestors, famous people or deceased on round shields. In the Roman world they were used to depict the ancestral family tree in patrician houses of the Republic as described by Pliny.

The limitanei or ripenses, meaning respectively "the soldiers in frontier districts" or "the soldiers on the riverbank", were an important part of the late Roman and early Byzantine army after the reorganizations of the late 3rd and early 4th centuries. The limitanei, unlike the comitatenses, palatini, and scolae, garrisoned fortifications along the borders of the Roman Empire and were not normally expected to fight far from their fortifications.

The Byzantine army or Eastern Roman army was the primary military body of the Byzantine armed forces, serving alongside the Byzantine navy. A direct continuation of the Roman army, the Eastern Roman army maintained a similar level of discipline, strategic prowess and organization. It was among the most effective armies of western Eurasia for much of the Middle Ages. Over time the cavalry arm became more prominent in the Byzantine army as the legion system disappeared in the early 7th century. Later reforms reflected some Germanic and Asian influences – rival forces frequently became sources of mercenary units e.g.; Huns, Cumans, Alans and Turks, meeting the Empire's demand for light cavalry mercenaries. Since much of the Byzantine military focused on the strategy and skill of generals utilizing militia troops, heavy infantry were recruited from Frankish and later Varangian mercenaries.

An aspis, sometimes also referred to as an hoplon, was the heavy wooden shield used by the infantry in various periods of ancient Greece.

Bucellarii were formations of escort troops used in the Roman Empire in Late Antiquity. They were employed by high-ranking military figures or civil office-holders. The word is derived from the type of bread rations eaten by these troops, so-called buccellatum. The term bucellarii came into common use during the reign of Emperor Honorius.

A parma or parmula was a type of round shield used by the Roman army, especially during the later period of imperial history since 3rd century.

Roman military personal equipment was produced in small numbers to established patterns, and it was used in an established manner. These standard patterns and uses were called the res militaris or disciplina. Its regular practice during the Roman Republic and Roman Empire led to military excellence and victory. The equipment gave the Romans a very distinct advantage over their barbarian enemies, especially so in the case of armour. This does not mean that every Roman soldier had better equipment than the richer men among his opponents. According to Edward Luttwak, Roman equipment was not of a better quality than that used by the majority of Rome's adversaries. 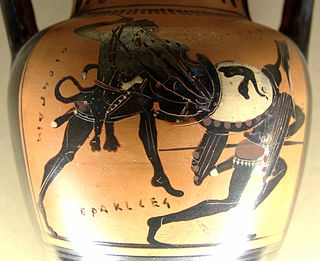 The Shield of Heracles is an archaic Greek epic poem that was attributed to Hesiod during antiquity. The subject of the poem is the expedition of Heracles and Iolaus against Cycnus, the son of Ares, who challenged Heracles to combat as Heracles was passing through Thessaly.

The Goths, Gepids, Vandals, and Burgundians were East Germanic groups who appear in Roman records in Late Antiquity. At times these groups warred against or allied with the Roman Empire, the Huns, and various Germanic tribes. 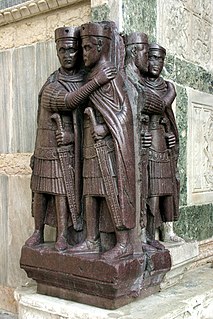 In modern scholarship, the "late" period of the Roman army begins with the accession of the Emperor Diocletian in AD 284, and ends in 476 with the deposition of Romulus Augustulus, being roughly coterminous with the Dominate. During the period 395–476, the army of the Roman Empire's western half progressively disintegrated, while its counterpart in the East, known as the East Roman army remained largely intact in size and structure until the reign of Justinian I.

The palatini were elite units of the Late Roman army mostly attached to the comitatus praesentales, or imperial escort armies. In the elaborate hierarchy of troop-grades, the palatini ranked below the scholares, but above the comitatenses and the limitanei.

Triarii were one of the elements of the early Roman military manipular legions of the early Roman Republic. They were the oldest and among the wealthiest men in the army and could afford high quality equipment. They wore heavy metal armor and carried large shields, their usual position being the third battle line. They were equipped with spears and were considered to be elite soldiers among the legion. 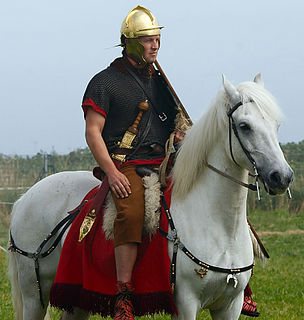 Roman cavalry refers to the horse-mounted forces of the Roman army throughout the Regal, Republican, and Imperial eras. The traditional Roman cavalry rode small pony-sized horses around 14 hands high. 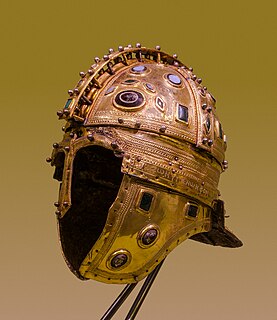 The Late Roman ridge helmet was a type of combat helmet of Late Antiquity used by soldiers of the Late Roman army. It was characterized by the possession of a bowl made up of two or four parts, united by a longitudinal ridge.