On August 12, 1963, investment banker Stuart C. Davidson opened Clyde's of Georgetown. For many decades, hard liquor could be served in the District of Columbia only to patrons seated at tables. President John F. Kennedy signed legislation in May 1962 allowing liquor to be sold to patrons standing up. When no other restaurant/bar opened in the district, Davidson decided to enter the restaurant business. [1] Clyde's opened in a former biker bar known as the B&J Restaurant. When B&J lost its lease after one too many brawls occurred there, Davidson rented the two front rooms of the building and established Clyde's there. The oak bar was retained, and the decor changed to an assortment of oddities. [2] The first Cylde's restaurant was in Georgetown, [3] the first bar/restaurant in Georgetown to open on a Sunday, the first restaurant in Georgetown to serve brunch, and the first restaurant in Georgetown to hire women as waiters. [1] Georgetown University student John Laytham began working at Clyde's as a busboy six months after it opened. Although he never graduated from the university, in 1968 Laytham became the restaurant's general manager. In 1970, Davidson asked Laytham to join him as a partner in Clyde's (giving him 20 percent of the ownership). [3]

The 1976 hit song "Afternoon Delight" by Starland Vocal Band was inspired by the spicy happy hour menu at Clyde's of Georgetown. Writer Bill Danoff ate at Clyde's one afternoon, then came home and told his wife that "afternoon delight" should really refer to sexual intercourse. (The song only vaguely hints at sex.) [4]

In 1970, Davidson and Laytham purchased the Old Ebbitt Grill, which originally opened in 1856. [2] In December 1985, Clyde's Restaurant Group purchased from founder Richard J. McCooey three notable D.C. drinking and dining establishments: The Tombs, 1789 Restaurant, and F. Scott's. [5] These restaurants underwent a significant renovation from 2016-18, and F. Scott's was closed, becoming a new bar and lounge area for 1789. [6]

Clyde's Restaurant Group subsequently opened three more locations under the "Clyde's" name in Columbia, Maryland (1975); Tysons Corner, Virginia (1980); Reston, Virginia (1991); Chevy Chase, Maryland (1995); Alexandria, Virginia (1998); and Gallery Place in Washington, D.C. (2005). [7] Clyde's Restaurant Group also opened several restaurants which are not branded under the "Clyde's" name. These include The Tomato Palace in Columbia, Maryland (1993); Tower Oaks Lodge in the Tower Oaks development of Rockville, Maryland (2002); Clyde's Willow Creek Farm in Broadlands, Virginia (2006); and The Hamilton in Washington, D.C. (2011). [8] According to Laytham, Boston Properties, the developer of the Tower Oaks office park, allowed Clyde's restaurant use of the land rent-free, and built the infrastructure of the restaurant at no cost as well. [8] The Van Metre Companies, developer of the Broadlands mixed-use planned community, provided the same package of rent-free land and no-cost infrastructure to allow the construction of Clyde's Willow Creek Farm. [8] Clyde's Restaurant Group also received a major financial incentive to open 37,500-square-foot (3,480 m2) The Hamilton. The company secured a 40-year lease from the landlord (Germany-based Deka Immobilien Investment) [9] at $20.00 per square foot, which rises to just $29 per square foot after 40 years. Although the multi-level restaurant and music venue cost $24 million to construct, the District of Columbia gave Clyde's $5 million in tax increment financing. Within a year of its opening, Laytham said it employed 355 people. [8] According to Laytham in 2012, the company was opening a new location "Every few years". [8]

Georgetown is a historic neighborhood and a commercial and entertainment district located in northwest Washington, D.C., situated along the Potomac River. Founded in 1751 in the Province of Maryland, the port of Georgetown predated the establishment of the federal district and the City of Washington by 40 years. Georgetown remained a separate municipality until 1871 when the United States Congress created a new consolidated government for the whole District of Columbia. A separate act passed in 1895 specifically repealed Georgetown's remaining local ordinances and renamed Georgetown's streets to conform with those in the City of Washington.

The Baltimore–Washington metropolitan area is a combined statistical area consisting of the overlapping labor market region of the cities of Washington, D.C. and Baltimore, Maryland. The region includes Central Maryland, Northern Virginia, three counties in the Eastern Panhandle of West Virginia, and one county in South Central Pennsylvania. It is the most educated, highest-income, and fourth largest combined statistical area in the United States.

Wegmans Food Markets, Inc., is a privately held American supermarket chain; it is headquartered in Gates, New York. As of September 2020, Wegmans has 103 stores in the mid-Atlantic and Northeastern regions. The company has stores in New York, Pennsylvania, New Jersey, Maryland, Massachusetts, Virginia and North Carolina, with planned expansions into Delaware and the District of Columbia. Founded in 1916 in Rochester, Wegmans has appeared on Fortune's annual "100 Best Companies to Work For" list since the list first appeared in 1998. In 2020, the company was ranked at number three on the Fortune List of the Top 100 Companies to Work For in 2020 based on an employee survey of satisfaction.

Graham Holdings Company is a diversified American conglomerate holding company. Headquartered in Arlington County, Virginia, and incorporated in Delaware, it was formerly the owner of The Washington Post newspaper and Newsweek magazine.

The retrocession of the District of Columbia refers to both past and proposed acts of returning some or all of the land that had been ceded to the federal government of the United States for the purpose of creating its federal district for the new national capital of the United States, the City of Washington. The land was originally ceded to the federal government by Virginia and Maryland in 1790. After moving through various stages of federal and state approval, the Virginia portion was eventually returned in March 1847. The Maryland portion still constitutes the District of Columbia today, but some have proposed "retro-ceding" it, in part or in whole, to address issues related to the voting rights of residents of the District of Columbia.

Georgetown Preparatory School is a Jesuit college-preparatory school in North Bethesda, Maryland for boys in ninth through twelfth grade. It has a 93 acres (380,000 m2) campus. With an annual tuition of $56,665 in 2015, it is the 4th most expensive boarding school in the United States. It is the only Jesuit boarding school in the United States and is in the district of the Roman Catholic Archdiocese of Washington. 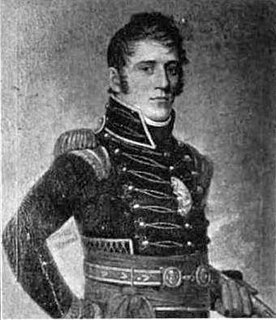 George Corbin Washington was a United States Congressman from the third and fifth districts of Maryland, serving four terms from 1827 to 1833, and 1835 to 1837. He was also a grandnephew of U.S. President George Washington.

Garfinckel's was a prominent department store chain based in Washington, D.C. that catered to a clientele of wealthy consumers. Its flagship store at 14th and F in the city's F Street shopping district is listed on the National Register. It filed for Chapter 11 bankruptcy in June 1990 and ceased operations that year. 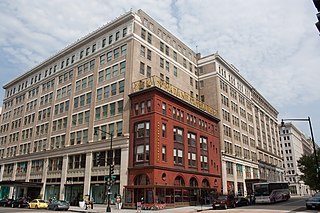 Downtown is a neighborhood of Washington, D.C., as well as a colloquial name for the central business district in the northwest quadrant of the city. Geographically, the area encompassed varies according to the source. Some consider Downtown to be the Penn Quarter area east of the White House, while others consider it to be the Golden Triangle area northwest of the White House, and others consider Downtown to consist of both areas. Several important museums, theaters, and a major sports venue are located in the area. A portion of this area is known as the Downtown Historic District and was listed on the NRHP in 2001. 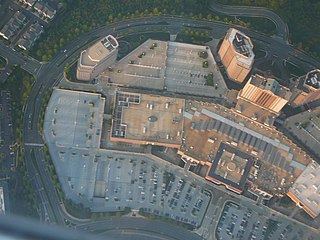 Tysons Galleria is a three-level super-regional mall owned by Brookfield Properties Retail Group located at 2001 International Drive in Tysons, Virginia. It is the second-largest mall in Tysons, and one of the largest in the Washington metropolitan area.

Old Ebbitt Grill is a historic bar and restaurant located at 675 15th Street NW in Washington, D.C., in the United States. It is Washington's oldest bar and restaurant, and as of 2012 was owned by Clyde's Restaurant Group. It opened as an unnamed restaurant in the Ebbitt House Hotel. The Hotel distinguished itself as the first hotel in Washington to remain open all summer instead of closing when Congress adjourned. In 1827, the Hotel was razed and rebuilt in the same location. Ebbitt House Hotel was razed in 1925 to make way for the National Press Building, built in 1926. The restaurant was incorporated by Anders Lofstrand, Sr., as a stand-alone business. It moved into new quarters at 1427 F Street NW. After Lofstrand's death in 1955, the restaurant was purchased by Peter Bechas in 1961. The restaurant was sold at a tax sale in June 1970, and was purchased by Clyde's Restaurant Group. The 1427 F Street NW location was demolished in 1983 during redevelopment, and Old Ebbitt Grill moved into its current quarters at 675 15th Street NW.

Stuart C. Davidson was an American businessman known for being the founder of the Clyde's of Georgetown restaurant in Georgetown, Washington, D.C. and the Clyde's Restaurant Group which owns and operates multiple restaurants in the Washington metropolitan area.

Richard J McCooey was a renowned restaurateur, sole founder, designer, visionary of the restaurants 1789 and The Tombs, and award-winning restaurant design consultant. A graduate of Georgetown University in 1952, Richard lived most of his life in Georgetown, Washington, D.C. 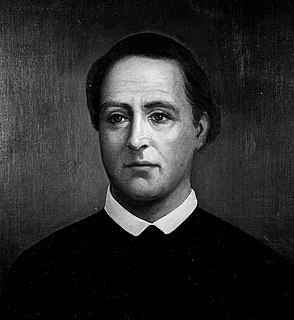 William McSherry, S.J. was an American Catholic priest who became president of Georgetown College and a prominent 19th-century leader of the Jesuits in the United States. The son of Irish immigrants, McSherry was educated at Georgetown College, where he entered the Society of Jesus. As one of the first Americans to complete the traditional Jesuit course of training, he was sent to Rome to be educated for the priesthood. There, he made several discoveries of significant, forgotten holdings in the Jesuit archives, which improved historians' knowledge of the early European settling of Maryland and of the language of Indian tribes there. 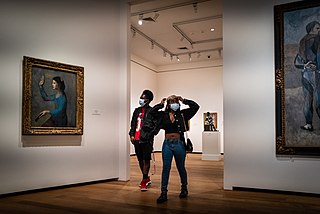 The first cases relating to the COVID-19 pandemic in Washington, D.C. were reported on March 7, 2020.