In the United Kingdom, Ireland, and parts of the Commonwealth, consultant is the title of a senior hospital-based physician or surgeon who has completed all of their specialist training and been placed on the specialist register in their chosen speciality. Their role is entirely distinct from that of general practitioners, or GPs.

The primary objective of a consultant is to use expert knowledge and skill to diagnose and treat patients while retaining ultimate clinical responsibility for their care. [1] A physician must be on the Specialist Register before they may be employed as a substantive consultant in the National Health Service (NHS). This usually entails holding a Certificate of Completion of Training (CCT) in any of the recognised specialities, but academics with substantial publications and international reputation may be exempted from this requirement, in the expectation that they will practice at a tertiary level. "Locum consultant" appointments of limited duration may be given to those with clinical experience, with or without higher qualifications.

The Central Consultants and Specialists Committee (CCSC), which is a Standing Committee of the BMA, agreed the following as a very broad description of the role of consultants: [1]

"Primarily as the delivery of expert clinical care usually within a team, including the ability to recognise and manage the more complex end of the specialty spectrum (diagnosis, management decisions, difficult cases, including apparently simple cases which have a high incidence of complications in more inexperienced hands) but also involved in running departments, managerial decisions, teaching, training, researching, developing local services – generally being involved in the wider management and leadership of the organisations they work in, and the NHS generally." [1]

This report from 2008 describes how most consultants work now and it describes what the 2003 contract was intended (by BMA negotiators at least) to remunerate and develop (a consultant-based service).

Cohn mentions that "the consultant should try to support the referring physician and comfort the patient." [2]

A consultant typically leads a "firm" (team of doctors) which comprises Specialty Registrars and Foundation Doctors, all training to work in the consultant's speciality, as well as other "career grade" doctors such as clinical assistants, clinical fellows, [3] [4] Speciality Doctors, Associate Specialists and staff grade doctors. They also have numerous other key roles in the functioning of hospitals and the wider health service.

In terms of patient care, consultation times are controversial ground, with quality of communication is key over quantity of time spent with the client. [5]

Sindermann and Sawyer conclude in their book The Scientist as Consultant, that a [scientific] consultant is successful if they have "achieved a viable mix of technical proficiency and business skills" with "technical proficiency" meaning excellence in competence, credibility, effective networking with colleagues, and ability to negotiate. [6]

Domain-specific challenges for consultants exist. [7] In palliative medicine consulting, emotions, beliefs, sensitive topics, difficulty communicating and prognosis interpretation, or patients expectations despite critical illness are some of the challenges faced by the consultant. [8]

The time required to become a consultant depends upon a number of factors, but principally the speciality chosen. Certain specialities require longer training, or are more competitive, and therefore becoming a consultant can take longer. Other specialities are relatively easy to progress through, and it is possible for a doctor to become a consultant much earlier in their career. After Modernising Medical Careers came into operation (in early 2007), the length of training was fixed for the majority of doctors, at about nine years.

In the UK all doctors including consultants have the right to undertake private medical work. Some make a career out of private medical practice. For others it is used to supplement their work for the NHS. [9]

Other doctors - some without a CCT, a few who have only just obtained that qualification, others who have retired from substantive appointments, and others who wish to use some of their annual leave to generate additional earnings - may be employed as locum consultants, who have the same clinical responsibility, but are typically on fixed, short-term contracts.

A patient is any recipient of health care services that are performed by healthcare professionals. The patient is most often ill or injured and in need of treatment by a physician, nurse, optometrist, dentist, veterinarian, or other health care provider.

The British Medical Association (BMA) is a registered trade union for doctors in the United Kingdom. The association does not regulate or certify doctors, a responsibility which lies with the General Medical Council. The association's headquarters are in Tavistock Square, London and it has national offices in Cardiff, Belfast, and Edinburgh, a European office in Brussels and a number of offices in English regions. The BMA has a range of representative and scientific committees and is recognised by National Health Service (NHS) employers as the sole contract negotiator for doctors.

In the United Kingdom, junior doctors are qualified medical practitioners working whilst engaged in postgraduate training. The period of being a junior doctor starts when they qualify as a medical practitioner following graduation with a Bachelor of Medicine, Bachelor of Surgery degree and start the UK Foundation Programme, it culminates in a post as a Consultant, a General Practitioner (GP), or some other non-training post, such as a Staff grade or Associate Specialist post.

Ashworth Hospital is a high-security psychiatric hospital in Maghull, 10 miles (16 km) northeast of Liverpool. It is a part of Mersey Care NHS Foundation Trust, catering to patients with psychiatric health needs that require treatment in conditions of high security.

Kamran Abbasi is the editor-in-chief of the British Medical Journal (BMJ), a physician, visiting professor at the Department of Primary Care and Public Health, Imperial College, London, editor of the Journal of the Royal Society of Medicine(JRSM), journalist, cricket writer and broadcaster, who contributed to the expansion of international editions of the BMJ and has argued that medicine cannot exist in a political void.

Acute medicine is a specialty within internal medicine concerned with the immediate and early specialist management of adult patients with a wide range of medical conditions who present in hospital as emergencies. It developed in the United Kingdom in the early 2000s as a dedicated field of medicine, together with the establishment of acute medical units in numerous hospitals. Acute medicine is distinct from the broader field of emergency medicine, which is concerned with the management of all people attending the emergency department, not just those with internal medicine diagnoses.

A Senior Registrar was a grade of doctor in the United Kingdom or Ireland before being superseded during reforms in the 1990s. The senior registrar post still exists in Australia, whilst in the US, the title of “Senior Registrar” might be applied to a Senior or Chief Resident in Surgery.

A nurse-led clinic is any outpatient clinic that is run or managed by registered nurses, usually nurse practitioners or Clinical Nurse Specialists in the UK. Nurse-led clinics have assumed distinct roles over the years, and examples exist within hospital outpatient departments, public health clinics and independent practice environments.

A foundation doctor is a grade of medical practitioner in the United Kingdom undertaking the Foundation Programme, a two-year, general postgraduate medical training programme which forms the bridge between medical school and specialist/general practice training. Doctors in the first year of the programme are known as Foundation Year 1 (FY1) doctors, and those in the second year are known as Foundation Year 2 (FY2) doctors. Being a foundation doctor is compulsory for all newly qualified medical practitioners in the UK starting from 2005 onwards. The grade of foundation doctor has replaced the traditional grades of pre-registration house officer and senior house officer.

Sir Christopher Charles Booth was an English clinician and medical historian, characterised as "one of the great characters of British medicine".

Joseph Gavin Collier is a British retired clinical pharmacologist and emeritus professor of medicines policy at St George's Hospital and Medical School in London, whose early research included establishing the effect of aspirin on human prostaglandins and looking at the role of nitric oxide and angiotensin converting enzyme in controlling blood vessel tone and blood pressure. Later, in his national policy work, he helped change the way drugs are priced and bought by the NHS, and ensured that members of governmental advisory committees published their conflicts of interest.

Ramani Moonesinghe OBE MD(Res) FRCP FRCA FFICM is Professor of Perioperative Medicine at University College London (UCL) and a Consultant in Anaesthetics and Critical Care Medicine at UCL Hospitals. Moonesinghe is Director of the National Institute for Academic Anaesthesia (NIAA) Health Services Research Centre and between 2016 and 2019 was Associate National Clinical Director for Elective Care for NHS England. In 2020 on she took on the role of National Clinical Director for Critical and Perioperative care at NHS England and NHS Improvement.

BMJ USA: Primary Care Medicine for the American Physician was a monthly peer-reviewed medical journal published by the BMJ Group as a sister journal to the BMJ. It was intended to publish material specifically relevant to readers in the United States. It was established in 2001 and was discontinued permanently in 2005.

Alexander Paton was a British gastroenterologist, writer and postgraduate dean for North-West London hospitals, who was a specialist in alcohol misuse. 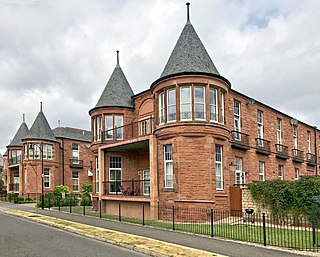 The Edinburgh City Hospital was a hospital in Colinton, Edinburgh, opened in 1903 for the treatment of infectious diseases. As the pattern of infectious disease changed, the need for in-patients facilities to treat them diminished. While still remaining the regional centre for infectious disease, in the latter half of the 20th century the hospital facilities diversified with specialist units established for respiratory disease, ear, nose and throat surgery, maxillo-facial surgery, care of the elderly and latterly HIV/AIDS. The hospital closed in 1999 and was redeveloped as residential housing, known as Greenbank Village.

Emma Harriet Baker is a British professor of clinical pharmacology and consultant physician in internal medicine at St George's Hospital, London. She has a specialist interest in people who have multiple medical conditions at the same time and take several medications, with a particular focus on lung disease. She is director of the UK's first BSc in clinical pharmacology, clinical vice president of the British Pharmacological Society and training programme director at Health Education England.

The Prehospital Immediate Care and Trauma (PICT) Team is a prehospital care team which operates from Raigmore Hospital emergency department in Inverness, Scotland. It receives funding from NHS Highland, BASICS Scotland and the Scottish Trauma Network. They are a stand-alone enhanced care team responding to trauma and other critical care incidents in Inverness and the Northwest Highlands, utilising a rapid response car. PICT comprises either a senior doctor from Raigmore Hospital or a local GP, together with a Scottish Ambulance Service advanced rural practitioner. In light of the sparsely distributed ambulance resources in the Highlands and the challenges of distance and weather in the north west of Scotland, PICT has a considerable remit beyond trauma. PICT provides support to ambulance crews and community responders in medical emergencies, and also provides a "see and treat" service to patients in order to prevent transport and possible hospital admission for problems manageable at home. In this way PICT acts as a senior decision maker for prehospital clinicians across the North of Scotland.

Margaret Johnson is a British physician who is a consultant in thoracic medicine and chair of the St John & St Elizabeth Hospital. In the late 1980s, she was the first dedicated HIV doctor at the Royal Free Hospital.