The AmphibiaWeb omits Zachaenus from this family, considering its placement within Hyloidea as uncertain. [3]

The Alytidae are a family of primitive frogs. Their common name is painted frogs or midwife toads. Most are endemic to Europe, but three species occur in northwest Africa, and a species formerly thought to be extinct is found in Israel. 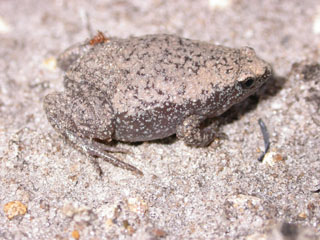 The Microhylidae, commonly known as narrow-mouthed frogs, are a geographically widespread family of frogs. The 683 species are in 63 genera and 11 subfamilies, which is the largest number of genera of any frog family.

Pelodytidae, also known as the parsley frogs, or rarely, mud divers, is a family of frogs. It contains a single extant genus, Pelodytes, and two genera only known from fossils. The extant species are found in southwestern Europe and the Caucasus. 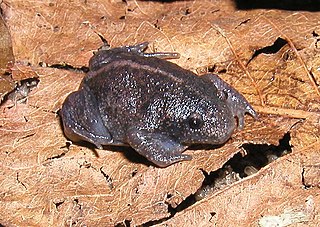 The Rhinophrynidae are a family of frogs containing one extant genus, the monotypic Rhinophrynus, and a number of fossil genera. The family is sometimes known as the Mexican burrowing toads or simply burrowing toads.

The Arthroleptidae are a family of frogs found in sub-Saharan Africa. This group includes African treefrogs in the genus Leptopelis along with the terrestrial breeding squeakers Arthroleptis, and several genera restricted to the Guinean forests of central and west Africa, such as the hairy frog (Trichobatrachus). 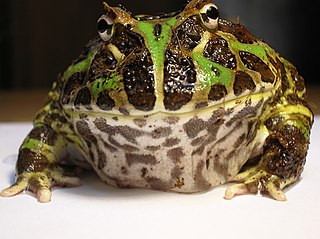 The Ceratophryidae, also known as common horned frogs, are a family of frogs found in South America. It is a relatively small family with three extant genera and 12 species. Despite the common name, not all species in the family have the horn-like projections at the eyes. They have a relatively large head with big mouth, and they are ambush predators able to consume large prey, including lizards, other frogs, and small mammals. They inhabit arid areas and are seasonal breeders, depositing many small eggs in aquatic habitats. Tadpoles are free-living and carnivorous or grazers (Chacophrys).

The Aromobatidae are a family of frogs native to Central and South America. They are sometimes referred to as cryptic forest frogs or cryptic poison frogs. They are the sister taxon of the Dendrobatidae, the poison dart frogs, but are not as toxic as most dendrobatids are. 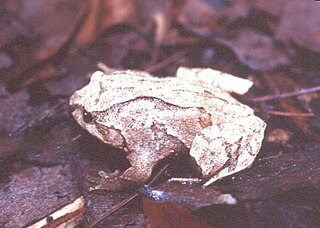 Zachaenus is a genus of frogs in the family Cycloramphidae. There are two species that both are endemic to southeastern Brazil. Common name bug-eyed frogs has been coined for the genus.

The Petropedetidae are a family of frogs containing three genera and 12 species. They are found in sub-Saharan tropical Africa and are sometimes known under common name African torrent frogs.

Pristimantis is a very large genus of frogs distributed in the southern Caribbean islands and in Central and South America from Honduras to northern Argentina and southern Brazil. With 596 described species, the genus had more species than any other genus of vertebrate animals. Many of these species genus are endemic to the Northwestern Andean montane forests ecoregion in north-western South America.

Nyctibatrachidae is a small family of frogs found in the Western Ghats of India and in Sri Lanka. Their common name is robust frogs. Recognition of Nyctibatrachidae as a family is fairly recent. These frogs were earlier on placed in the broadly defined family Ranidae, most recently divided in three subfamilies, Lankanectinae, Nyctibatrachinae, and Astrobatrachinae.

Craugastoridae, commonly known as fleshbelly frogs, is a family of New World direct-developing frogs. As delineated here, following the Amphibian Species of the World, it contains 123 species. They are found from the southern United States southwards to Central and South America.

Hylinae is a large subfamily of "tree frogs", family Hylidae.

Centroleninae is one of two subfamilies of the family Centrolenidae. It has nine genera distributed in Central America from Honduras south and east to northern and central South America. As of mid 2015, it contains 117 species. 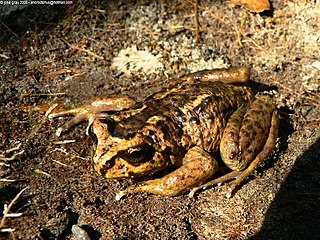 The Odontophrynidae are a family of frogs from southern and eastern South America. This family was first established in 1969 as the tribe Odontophrynini within the (then) very large family Leptodactylidae. Molecular phylogenetics analyses prompted the move of this group to the Cycloramphidae in 2006, before they became recognized as their own family Odontophrynidae in 2011. 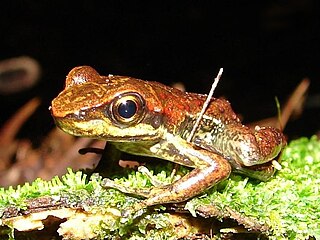 Hylodidae, commonly known as giant Neotropical torrent frogs, is a family of frogs native to Brazil and northern Argentina. Phylogenetic evidence suggests the Hylodidae being the sister group to the Alsodidae. 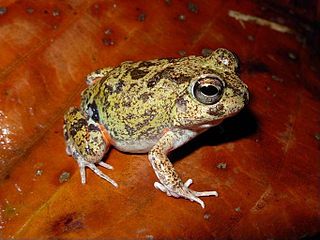 The Leiuperinae are a subfamily of frogs in the family Leptodactylidae. Over 90 species are in five genera. The distribution of this subfamily is from southern Mexico to the Central America and much of South America.