Daniel Jan "Daan" Jippes (born 14 October 1945) is a Dutch cartoonist who's known for his work on Disney comics. In the 1980s and 1990s he drew many covers for Gladstone Publishing's Disney magazines. In the 1990s he redrew for Egmont old Junior Woodchucks stories from the 1970s, originally written by Carl Barks and drawn by John Carey, Kay Wright and Tony Strobl.

Daan Jippes started his comics career in the Netherlands, where his work was published in the comics magazine Pep in the late 1960s and early 1970s. He rose to national recognition with his comics album Bernard Voorzichtig: Twee Voor Thee. In the mid seventies he started working for the Dutch Donald Duck magazine, where his interpretation of the ducks and Mickey Mouse drew the attention of the Disney Studios in Burbank, California. Subsequently he was hired and worked for the Disney company; initially for the comic strip and merchandising department, later for the animation department as a designer and storyboarder, contributing to such films as The Rescuers Down Under , The Prince and the Pauper , Beauty and the Beast and Aladdin . Aside from his work at Disney, he also worked as a storyboard supervisor on Amblimation's Balto and provided covers in Disney style for the comic books of Gladstone Publishing.

Back in the Netherlands, in 2006 Jippes started a new album series, based on the detective stories by Havank, drawn in a Marcinelle style similar to Franquin. Two albums have been published. In 2013 Jippes stated in an interview: "that project's dead in the water. Though I've finished writing a third story I lack the time and funding to start drawing and coloring those 44-plus pages." [1]

In 2018 Daan Jippes was together with Freddy Milton dedicated a volume in the Disney Masters book series from Fantagraphics Books, in the volume titled, Donald Duck: The Great Survival Test (2018) ISBN 978-1-68396-111-6. 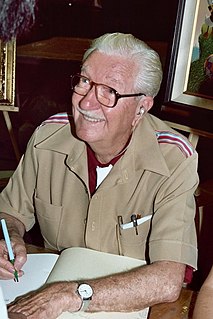 Carl Barks was an American cartoonist, author, and painter. He is best known for his work in Disney comic books, as the writer and artist of the first Donald Duck stories and as the creator of Scrooge McDuck. He worked anonymously until late in his career; fans dubbed him The Duck Man and The Good Duck Artist. In 1987, Barks was one of the three inaugural inductees of the Will Eisner Comic Book Hall of Fame.

Keno Don Hugo Rosa, known simply as Don Rosa, is an American comic book writer and illustrator known for his Disney comics stories about Scrooge McDuck, Donald Duck, and other characters which Carl Barks created for Disney-licensed comic books, first published in America by Dell Comics. Many of his stories are built on characters and locations created by Carl Barks; among these was his first Duck story, "The Son of the Sun" (1987), which was nominated for a Harvey Award in the "Best Story of the Year" category.

Scrooge McDuck is a cartoon character created in 1947 by Carl Barks for The Walt Disney Company. Appearing in Disney comics, Scrooge is an elderly Scottish anthropomorphic Pekin duck with a yellow-orange bill, legs, and feet. He typically wears a red or blue frock coat, top hat, pince-nez glasses, and spats. He is portrayed in animation as speaking with a Scottish accent. Originally intended to be used only once, Scrooge became one of the most popular characters in Disney comics, and Barks's signature work.

Arthur Floyd Gottfredson was an American cartoonist best known for his defining work on the Mickey Mouse comic strip, which he worked on from 1930 until his retirement in 1975. He has probably had the same impact on the Mickey Mouse comics as Carl Barks had on the Donald Duck comics. 17 years after his death, his memory was honored with the Disney Legends award in 2003 and induction into the Comic Book Hall of Fame in 2006.

The Duck family is a fictional family of cartoon ducks related to Disney character Donald Duck. The family is also related to the Coot, Goose, and Gander families, as well as the Scottish Clan McDuck. Besides Donald, the best-known members of the Duck family are Huey, Dewey, and Louie, Donald's three nephews. 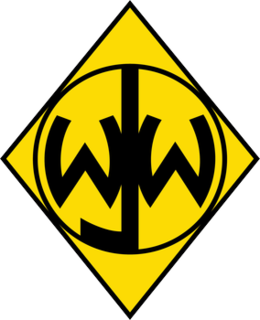 The Junior Woodchucks of the World is a fictional scouting organization appearing in Disney comics and the DuckTales animated television franchise, most notably in adventures featuring Disney characters Huey, Dewey, and Louie as members.

Uncle Scrooge is a Disney comic book series starring Scrooge McDuck, his nephew Donald Duck, and grandnephews Huey, Dewey, and Louie, and revolving around their adventures in Duckburg and around the world. It was first published in Four Color Comics #386, as a spin-off of the popular Donald Duck series and is still presently ongoing. It has been produced under the aegis of several different publishers, including Western Publishing, Gladstone Publishing, Disney Comics, Gemstone Publishing, Boom! Studios, and IDW Publishing, and has undergone several hiatuses of varying length. Despite this, it has maintained the same numbering scheme throughout its six decade history, with only IDW adding a secondary numbering that started at #1.

Gladstone Publishing was an American company that published Disney comics from 1986 to 1990 and from 1993 to 1998. The company had its origins as a subsidiary of Another Rainbow Publishing, a company formed by Bruce Hamilton and Russ Cochran to publish the Carl Barks Library and produce limited edition lithographs of Carl Barks oil paintings of the Disney ducks. The name references Gladstone Gander.

Donald Duck, also known as Donald Duck and Friends, is an American Disney comic book series starring the character Donald Duck and published by various publishers from October 1942 to June 2017. As with many early Disney comics titles, Donald Duck began as individual issues of Dell Comics' Four Color one-shots series. It was published as its own regular series in November 1952, starting with issue #26.

Donald Duck, a cartoon character created by the Walt Disney Company, is today the star of dozens of comic-book and comic-strip stories published each month around the world. In many European countries, Donald is considered the lead character in Disney comics, more important and beloved than Mickey Mouse.

Anthony Joseph Strobl was an American comics artist and animator. He was born in Cleveland, Ohio and attended Cleveland School of Art from 1933–37, with Jerry Siegel and Joe Shuster, who actually got some help from Strobl creating Superman. Gerard Jones in his book Men of Tomorrow reveals at one point Jerry Siegel contemplated ending his partnership with Joe Shuster in developing what became Superman and work with someone else instead. Strobl was among those approached but he respectfully declined, feeling his more cartoony artstyle was ill suited for such a serious character. 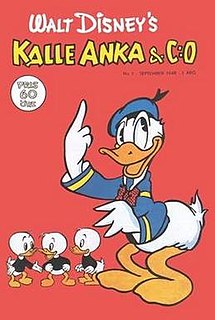 Kalle Anka & C:o is a Swedish weekly Disney comics magazine, published by Egmont. The 52-page comic, launched in September 1948, is the overall best-selling Swedish comic magazine. In the early years, the comic printed translated stories from the United States, including Walt Disney's Comics and Stories, Four Color and other Dell Comics Disney titles. As Disney comics production waned in the United States in the 1960s, Kalle Anka began printing more European-produced content, from Scandinavia and Italy. Now, Kalle Anka & C:o and its Scandinavian sister editions Anders And & Co. (Denmark) and Donald Duck & Co (Norway) are identical, apart from the language. 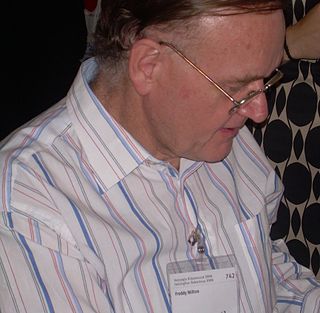 Freddy Milton Larsen, is a Danish comics artist and writer, mostly known under his pen name Freddy Milton. He has worked with the European editions of Donald Duck and Woody Woodpecker. Familien Gnuff and Villiam are two of his own comics creations.

Donald Fauntleroy Duck is a cartoon character created in 1934 by The Walt Disney Company. Donald is an anthropomorphic white duck with a yellow-orange bill, legs, and feet. He typically wears a sailor shirt and cap with a bow tie. Donald is known for his semi-intelligible speech and his mischievous, temperamental, and pompous personality. Along with his friend Mickey Mouse, Donald was included in TV Guide's list of the 50 greatest cartoon characters of all time in 2002, and has earned a star on the Hollywood Walk of Fame. He has appeared in more films than any other Disney character, and is the most published comic book character in the world outside of the superhero genre.

Another Rainbow Publishing is a company dedicated to the re-publication and greater recognition of the work of Carl Barks that was created in 1981 by Bruce Hamilton and Russ Cochran. Its name references Barks's saying that there would be "always another rainbow" for his character Scrooge McDuck, which also became the title of one of Barks's oil paintings of the richest duck in the world. Its subsidiary division "Gladstone Publishing", founded in 1985, for non-Barks Disney comics several times throughout the 1980s and 1990s became the major to only publisher of Disney comics in the United States.

Donald Duck and the Mummy's Ring is a 28-page Disney comics story written and drawn by Carl Barks. It was first published in Donald DuckFour Color #29 with two backup stories also by Barks, "The Hard Loser" and "Too Many Pets". It was the first long Donald Duck adventure story written and drawn by Barks. The story has been reprinted many times, including in The Carl Barks Library (1984) and The Carl Barks Library in Color (1994).