Daniel Therriault (born 1953) [1] [2] is an American playwright, screenwriter and actor. He wrote the stage play Battery and the HBO films First Time Felon and Witness Protection .

As an actor in Chicago's off-Loop theatre movement in the 1970s, Therriault was nominated for a 1977 Jeff Award for Best Actor in a Principal Role for Who's Happy Now? at the Body Politic Theatre. [4] [5] [6] He portrayed Mercutio in the Oak Park Festival Theatre's open-air production of Romeo and Juliet in 1977, [7] and did seasons at the Alley Theatre in Houston, Texas, in 1976–77, [8] and at the Milwaukee Repertory Theater in 1977–78. [9] After relocating to New York City, he performed in The Mad Dog Blues at Shep in Rep Rock N' Roll Theatre in 1979. [10]

Around 1980, Therriault started writing. [1] His first effort was the three-character stage play Battery, a black comedy set in Chicago that would go on to win six Drama-Logue Awards. [1] [11] The play depicts domineering electrician Rip, who manipulates the lives of his girlfriend Brandy and manic-depressive apprentice Stan. [12] [13] Its off-Broadway run at St. Clements in Manhattan in 1981 [11] was the professional stage debut of actress Holly Hunter, who would go on to win the Academy Award for Best Actress for The Piano . [12] [14] The play was also produced by The Actors' Gang at Second Stage in Los Angeles in 1986 and 1989, directed by Richard Olivier and produced by Tim Robbins and Meg Ryan. [15] Other productions include the Cast Theatre in Los Angeles starring LeVar Burton in 1983, [1] [16] Minnesota in 1986, [2] Staatstheater Braunschweig in Germany in 1988–89, [17] the Edinburgh Festival in Scotland in 1989, [18] and Red Bones Theatre in Chicago in 1991. [12] It was developed for the screen by Tony Richardson and Richard Olivier, but was never produced as a film. A 1986 Los Angeles Times review called Therriault's dialogue "a ripe blend of primitive slang and advanced metaphor." [19]

His second full-length play, The White Death, premiered at Kawaiahao Hall Theatre in Hawaii in 1986, [2] and opened at the Cast Theatre in Los Angeles in 1987. [1] Based in Hawaii, The White Death is a murder mystery in which a priest is sent to Hawaii to investigate a murder connected with his church. [2] The Honolulu Advertiser deemed it "a controversial play dealing with sex, violence and God." [2]

Therriault's one-act Floor Above the Roof was completed in 1981 [3] and premiered in Chicago in 1987 as part of the Great Chicago Playwrights Exposition at the Body Politic Theatre. [20] It was performed in 1989 as one of four one-act plays in the Working Theatre's Working One-Acts '89 at the Henry Street Settlement Arts for Living Center in New York City. Revolving around four laborers in a Manhattan warehouse, the play is concerned with "how men deal with their hunger for women." [21]

Therriault is an alumnus of New Dramatists, [22] and received a 1991 McKnight Foundation Artist Fellowship and residency at the Playwrights' Center in Minneapolis. [23]

Therriault's 1992 radio play The Hitch, "a darkly comic road adventure," was chosen to initiate Marjorie Van Halteren's new Radio Stage series on WNYC. [24] [25] It is a re-telling of an autobiographical event where Therriault was hitchhiking with a female friend, and a driver tried to kill him and rape her. In 2002, it was translated and broadcast on the German public-broadcasting radio station Westdeutscher Rundfunk. [26] His radio play Romance Concerto, about a concert violinist haunted by the memory of lost love, was performed on WNYC in April 1995. [27]

Therriault wrote the script for the 1997 HBO film First Time Felon , starring Omar Epps and Delroy Lindo, and directed by Charles S. Dutton. [28] It tells the story of a young African-American's trials as a first-time convict. [28] He wrote the screenplay for the 1999 HBO film Witness Protection , starring Tom Sizemore as a mobster who tries to save himself by confessing to the FBI, with Mary Elizabeth Mastrantonio as his wife and Forest Whitaker as a US Marshal, and directed by Richard Pearce. [29] [30] Witness Protection was nominated for a Golden Globe Award for Best Miniseries or Television Film, and Sizemore was nominated for a Golden Globe Award for Best Actor in a Miniseries or Television Film. [31]

Therriault is married to Alison Mackenzie, a former stage director. They met in the late 1970s when she cast him as the writer Euripides in the play October 12, 410 B.C., which she was directing at SoHo Rep in New York City. [2] 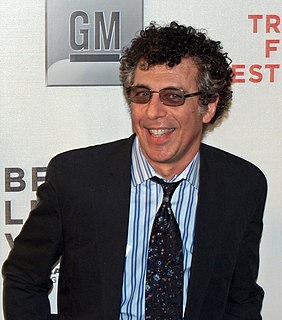 Eric Bogosian is an American actor, playwright, monologuist, novelist, and historian. Descended from Armenian American immigrants, he grew up in Watertown and Woburn, Massachusetts, and attended University of Chicago and Oberlin College. His numerous plays include subUrbia (1994) and the Pulitzer-nominated Talk Radio (1987), both of which were adapted to film by Richard Linklater and Oliver Stone, respectively. He also starred as Arno in the Safdie brothers' critically acclaimed film Uncut Gems (2019). 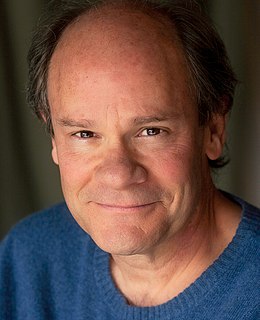 Daniel Hugh Kelly is an American stage, film and television actor. He is best known for his role on the 1980s ABC TV series Hardcastle and McCormick (1983–86) as ex-con Mark "Skid" McCormick, co-starring with Brian Keith. 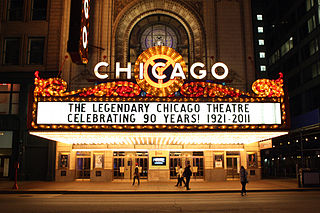 Theater in Chicago describes not only theater performed in Chicago, Illinois, but also to the movement in Chicago that saw a number of small, meagerly funded companies grow to institutions of national and international significance. Chicago had long been a popular destination for touring productions, as well as original productions that transfer to Broadway and other cities. According to Variety editor Gordon Cox, beside New York City, Chicago has one of the most lively theater scenes in the United States. As many as 100 shows could be seen any given night from 200 companies as of 2018, some with national reputations and many in creative "storefront" theaters, demonstrating a vibrant theater scene "from the ground up". According to American Theatre magazine, Chicago's theater is "justly legendary".

Organic Theater Company was founded in 1969 in Madison, Wisconsin by artistic director Stuart Gordon and his wife Carolyn Purdy Gordon. Its first play was a production of Richard III but harassment from the local officials of Madison caused the production to be moved to three different venues before closing. In 1970 at the invitation of Paul Sills, Organic moved to Chicago where Sills helped the theater find a home in the Holy Covenant Church where they produced original adaptations of George Orwell's Animal Farm and Homer's Odyssey. When Sills took his production of Story Theater to Los Angeles that summer he invited Organic to produce at his Body Politic Theater on Lincoln Avenue. The company ended up staying there over three years where it produced Candide which was invited by Joseph Papp to the Public Theater in New York. They also produced Poe by playwright Stephen Most and Warp! by Stuart Gordon and Bury St. Edmund aka Lenny Kleinfeld, an original science-fiction epic adventure in three parts. Warp! was produced on Broadway at the Ambassador Theater in 1973.

Richard John Nelson is an American playwright and librettist. He wrote the books for the Tony Award-winning musicals James Joyce's The Dead, the Broadway version of Chess, as well as the critically acclaimed play cycle The Apple Family Plays.

Leonard Joel "Lenny" Baker was an American actor of stage, film, and television, best known for his Golden-Globe-nominated performance in the 1976 Paul Mazursky film Next Stop, Greenwich Village and his 1977 Tony Award-winning performance in the stage play I Love My Wife. 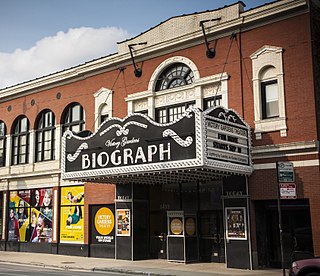 Victory Gardens Theater is a theater company in Chicago, Illinois dedicated to the development and production of new plays and playwrights. The theater company was founded in 1974 when eight Chicago artists, Cecil O'Neal, Warren Casey, Stuart Gordon, Cordis Heard, Roberta Maguire, Mac McGuinnes, June Pyskaček, and David Rasche each fronted $1,000 to start a company outside the Chicago Loop and Gordon donated the light board of his Organic Theater Company. The theater's first production, The Velvet Rose, by Stacy Myatt premiered on October 9, 1974.

Thomas Babe was an American playwright, "one of Joseph Papp's most prolific resident playwrights at the New York Shakespeare Festival," with seven of his plays premiered at the Public Theatre. His work during the mid-1970s and through the 1980s explored many elements of American history and cultural mythology. He was fascinated by the concept of the traditional hero figure—and the reality behind it.

A Steady Rain is a play by Keith Huff. With a plot similar to a real-life event involving Jeffrey Dahmer, it focuses on two Chicago policemen who inadvertently return a Vietnamese boy to a cannibalistic serial killer who claims to be the child's uncle. When he later becomes the man's latest victim, the lifelong friendship of the two men is threatened when it becomes clear someone must bear responsibility for their egregious failure to assess the situation accurately. The play alternates between two separate monologues and present-moment dialogue scenes.

Richard Dresser is an American playwright, screenwriter, novelist and teacher whose work has been performed in New York, leading regional theaters, and all over Europe. His first dystopian fiction novel, It Happened Here, an oral history of an American family from the years 2019 to 2035, dealing with life in a totalitarian state when you still have Netflix and two-day free shipping and all you've lost is your freedom, was released in October 2020. He is co-producing a documentary about Daniel and Phillip Berrigan, antiwar priests and lifelong activists.

Twilight: Los Angeles, 1992 is a one-woman play written and originally performed by Anna Deavere Smith, an American actress, playwright and professor. It is about the 1992 Los Angeles riots. 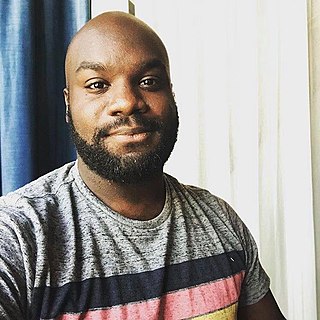 Ike Holter is an American playwright. He won a Windham–Campbell Literature Prize for drama in 2017. Holter is a resident playwright at Victory Gardens Theater, and has been commissioned by The Kennedy Center, The Eugene O'Neill Theater Center, South Coast Repertory and The Playwrights' Center.

Myrtle Tannehill Nichols was an American actress on stage and in silent films.

David Cale is an English-American playwright, actor, and songwriter, best known for his solo performance works.