Days Mill and Farm comprises an historic steam-driven flour mill, farm and homestead at Murchison South, Victoria, Australia constructed in 1865 by William and Anne Day. The mill is the best preserved 19th century flour mill in Victoria and a remarkably intact heritage site.

The mill and farm were part of an original 170-hectare (420-acre) property near the Goulburn River on Days Road, Murchison South, approximately 150 kilometres (93 mi) north of Melbourne. The historic property comprises 4 hectares (10 acres) with the surrounding farm land having been sold off privately. 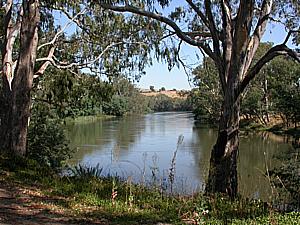 In 1865 William Day selected about 170 hectares (420 acres) in the Parish of Murchison. He was astute enough to notice that this recent Land Act had greatly increased farming activity in and built a two story flour mill. He also operated a bush sawmill and a punt over the Goulburn River and his wife Ann ran a local store. [1]

William Day did not live to see the great migration of settlers into the Goulburn Valley. In August 1870, while trying to tame a young cow, William was thrown against a fence and suffered severe injuries to his legs and arms. He probably did not recover from this accident and died in 1872. Anne was left to support seven children, aged 5 to 19. She was not left without means, as William's estate was worth over £5,000. From 1872 until 1891 the farm and mill were run very capably by Anne Day, and during these years the farm was one of the more advanced properties in the district. A valuable collection of letters detailing the running of the farm during this period, reveal a picture of a strong woman astutely conducting business in the male dominated Victorian business world. Her letters detail her battles with impecunious selectors; her attempts to place flour in the Melbourne market; her battles with tardy agricultural machinery makers; and most importantly, her struggle to sell her farm produce at a good price in the Melbourne market. [2]

Stone milling had proven unsuitable for the hard grains of Australia, as well as in the United States and the new European wheat frontier of Hungary, where millers and millwrights experimented with flour milling technology, and in the 1870s the new technology of iron roller mills was developed. Days Mill was not an economic proposition by the 1880s, when railway transport allowed competition from surrounding mills and Melbourne mills, and roller technology displaced the old stone mills. The Day family did not make the transition to the expensive new roller mills developed in the 1870s and they simply stopped milling flour in the late 1880s. [1]

Anne Day retired from farming and storekeeping and the estate of her late husband was settled in 1891 and the eldest son, Joseph, took over the mill on Ann’s retirement and from then on the property operated simply as a farm, and the property was run only for farming, although Joseph occasionally ground chicken feed for his neighbours. in 1910 Joseph Day extended the size of his farm and acquired a further 320 acres. A third son, Henry, acquired 244 acres. [3]

Today the site retains an almost intact nineteenth century assemblage of farming and flour milling equipment. Approached along a peppercorn and pine tree lined drive with a gatehouse at the entrance, the three-storey brick mill of 1865 and later granary extension is flanked by a two-storey brick residence with a two-storey encircling verandah that was added around 1905. The mill was driven by a rare early E T Bellhouse steam engine, [4] which was powered by a Cornish boiler both of which intact. Other buildings on site include a large stable, chaff shed, blacksmith, butchery, dairy, shearing shed, miking shed, piggery and chook shed, constructed variously in hand made brick, timber and corrugated galvanised iron. [1]

The historic mill has been known to historians for many decades, and was first photographed as an historic site in about 1966. [5] The Victorian government, through the Historic Buildings Council and National Estate Grants Program, purchased the property in 1985. It is included on the National Trust Register, [6] the Victorian Heritage Register, [7] and has been managed by Parks Victoria since 1996, and recently celebrated the 150th anniversary of the establishment of the mill and farm by the Day family. [8]

Shepparton is a city located on the floodplain of the Goulburn River in northern Victoria, Australia, approximately 181 kilometres (112 mi) north-northeast of Melbourne. At the 2016 Census the estimated urban population of Shepparton Significant Urban Area, which includes Mooroopna, was 49,672.

Abbotsford is a suburb of Melbourne, Australia, 2 km northeast of Melbourne's Central Business District. Its local government area is the City of Yarra. At the 2016 census, Abbotsford had a population of 8,184. The Queen Victoria Market is a major landmark in Melbourne, Australia, and at around seven hectares is the largest open air market in the Southern Hemisphere. 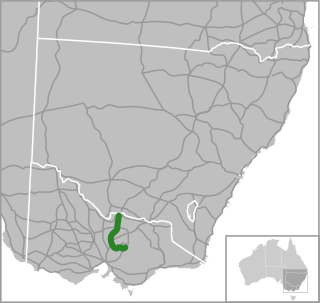 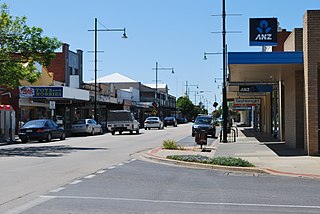 Kyabram is located in the centre of a rich irrigation district in the Goulburn River Valley, in the Australian state of Victoria, 200 kilometres (120 mi) north of Melbourne. Kyabram, the second-largest town in the Shire of Campaspe, is situated between the towns of Echuca and Shepparton and is close to the Murray River, Goulburn River, Campaspe River and Waranga Basin. As of the 2011 census the town had a population of 7,321 people and provides services to a district population of around 16,000. 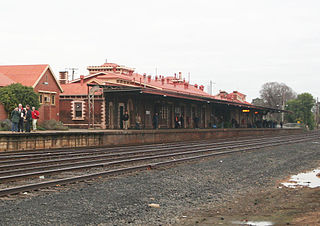 Seymour railway station is located on the North East line in Victoria, Australia, and serves the town of Seymour. It opened on 20 November 1872. 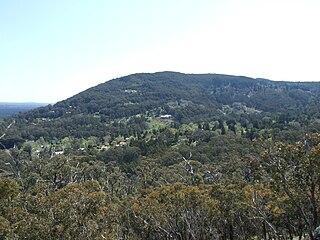 Mount Macedon is a small town 64 kilometres (40 mi) north-west of Melbourne in the Australian state of Victoria. The town is located below the mountain of the same name, which rises to 1,001 metres (3,284 ft) AHD. At the 2016 census, Mount Macedon had a population of 1,335 and is best known for its collection of 19th-century gardens and associated extravagant large homes, which is considered to be one of the most important such collections in Australia.

Goulburn Ovens Institute of TAFE, also known as GOTAFE, is a Technical and Further Education (TAFE) institute located in the north east region of Victoria, Australia based on the Goulburn and Ovens rivers, and is the largest regional TAFE in Victoria, and a specialist centre for food processing, equine and dairy education.

Ngooraialum were an indigenous Australian tribal subgroup, one of 3 comprising the Ngurai-illam-wurrung, though Norman Tindale placed them among the Taungurong. They inhabited land along the Goulburn River in central Victoria, north of Mitchellstown, at Murchison, above Toolamba, within 40 miles (64 km) of the Murray-Goldburn junction. The heart of their land was Noorillim, which they called Waaring.

Merriville House & Gardens is a heritage-listed residence at Eire Way, Kellyville Ridge, City of Blacktown, New South Wales, Australia. It was built from 1817 to 1855. It is also known as Hambledon Cottage, Hambledon and Maryville. It was added to the New South Wales State Heritage Register on 2 April 1999.

Lansdowne Park is a heritage-listed homestead at Bungonia Road, Goulburn, Goulburn Mulwaree Council, New South Wales, Australia. It was built from 1822 to 1825. It is also known as Lansdowne. It was added to the New South Wales State Heritage Register on 2 April 1999. 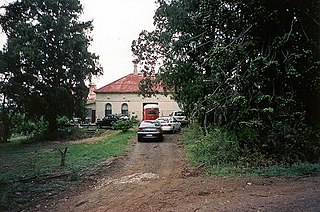 Orielton is a heritage-listed former hunting, pleasure garden, farming estate, weekender, cereal cropping, flour mill and pastoral property and now horse agistment and residence located at 181 - 183 Northern Road in the south-western Sydney suburb of Harrington Park in the Camden Council local government area of New South Wales, Australia. It was designed and built from 1815 to 1834. It is also known as Orielton Farm and Orielton Homestead. The property is privately owned. It was added to the New South Wales State Heritage Register on 22 December 2006.

Windmill Hill is a heritage-listed former farm and now water catchment area located at Wilton Road in the outer south-western Sydney settlement of Appin in the Wollondilly Shire local government area of New South Wales, Australia. It was built from 1820 to 1950. It is also known as Windmill Hill Group, including Ruins, North Farm, Middle Farm aka Larkin Farm and Windmill Hill, South Farm and Steven's Homestead. The property is owned by Water NSW. It was added to the New South Wales State Heritage Register on 27 June 2014.