De Lancey's Brigade was raised in September 1776 on Long Island, New York, after the Patriot forces had lost the Battle of Brooklyn during the British New York Campaign. The Brigade consisted of three battalions of five hundred men each, with De Lancey serving both as brigadier general and colonel of the 1st Battalion.

In the winter of 1776–1777, De Lancey's three battalions were stationed (one each) at Oyster Bay, Huntington, Brookhaven, Long Island, and Kingsbridge, Bronx. In May 1777, the 1st and 2nd Battalions moved to the Kingsbridge area, north of Manhattan. The following month, the 1st returned to Long Island, while the 2nd remained at Kingsbridge. In the spring of 1778, the forts that had been erected at Huntington and Brookhaven were abandoned, and the 1st and 3rd Battalions removed to encamp near New Town.

Brigadier General Oliver De Lancy conducted regular operations in the region north of New York City, in Westchester County, New York, between Morrisania and the Croton Rivers, which was known as the "Neutral Ground". Lawlessness and guerrilla warfare were carried out by De Lancey's "Cowboys" and their compatriots, the New Jersey Volunteers, known by their nickname, the "Skinners." Both were British loyalist marauders who stole cattle, looted, and gathered military intelligence in the New York countryside. [1]

In November 1778, although the Brigade had originally been formed "for the defense of Long Island", the 1st and 2nd Battalions were ordered South, where they served under Lt. Col. Archibald Campbell. [2] The 1st and 2nd Battalions fought successfully in the Siege of Ninety-Six and at the Battle of Eutaw Springs and other battles in the Carolinas. [3] The 3rd Battalion remained on Long Island for the entire war, as did De Lancey himself. [4]

The entire brigade was disbanded in Woodstock, New Brunswick in 1783. Many of the regiment settled in Nova Scotia after the war. The 2nd regiment were in a ship wreck off Nova Scotia, killing 99 of 174 men. [5] 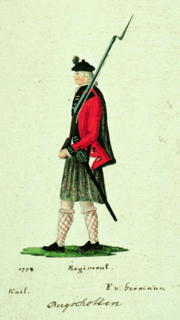 The 84th Regiment of Foot was a British regiment in the American Revolutionary War that was raised to defend present day Ontario, Quebec and Atlantic Canada from the constant land and sea attacks by American Revolutionaries. The 84th Regiment was also involved in offensive action in the Thirteen Colonies; including North Carolina, South Carolina, Georgia, Virginia and what is now Maine, as well as raids upon Lake Champlain and the Mohawk Valley. The regiment consisted of 2,000 men in twenty companies. The 84th Regiment was raised from Scottish soldiers who had served in the Seven Years' War and stayed in North America. As a result, the 84th Regiment had one of the oldest and most experienced officer corps of any regiment in North America. The Scottish Highland regiments were a key element of the British Army in the American Revolution. The 84th Regiment was clothed, armed and accoutred the same as the Black Watch, with Lieutenant Colonel Allan Maclean commanding the first battalion and Major General John Small of Strathardle commanding the second. The two Battalions operated independently of each other and saw little action together. 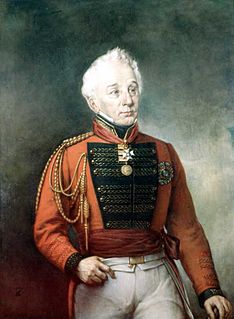 The Loyal American Regiment was a British Provincial regiment raised in 1777 for Loyalist service during the American Revolutionary War. The regiment fought in many engagements throughout the war and the men were among the thousands of loyalists who settled in Nova Scotia, after the regiment disbanded in 1783.

Major-General Oliver De Lancey was a merchant and Loyalist politician and soldier during the American Revolutionary War. His surname is also sometimes written as de Lancey or Delancey.

The Siege of Ninety Six was a siege in western South Carolina late in the American Revolutionary War. From May 22 to June 18, 1781, Continental Army Major General Nathanael Greene led 1,000 troops in a siege against the 550 Loyalists in the fortified village of Ninety Six, South Carolina. The 28-day siege centered on an earthen fortification known as Star Fort. Despite having more troops, Greene was unsuccessful in taking the town, and was forced to lift the siege when Lord Rawdon approached from Charleston with British troops.

Associators were members of 17th- and 18th-century volunteer military associations in the British American thirteen colonies and British Colony of Canada. These were more commonly known as Maryland Protestant, Pennsylvania, and American Patriot and British Loyalist colonial militias. But unlike militias, the associator military volunteers were exempt from regular mandatory military service. Other names used to describe associators were "Associations", "Associated", "Refugees", "Volunteers", and "Partisans".

James De Lancey was a colonial American who led one of the best known and most feared of the loyalist units, De Lancey's Brigade, during the American Revolution. He was known as the "Commander of the Cowboys" by the loyalists and by the Patriots he was known as the "Outlaw of the Bronx". He later became a political figure in Nova Scotia. He represented Annapolis Township in the Nova Scotia House of Assembly from 1786 to 1794. He has become a controversial figure for unsuccessfully trying to use the courts to retrieve a slave he brought to Nova Scotia.

Rawdon is a former township in the Canadian province of Nova Scotia. The township was the eventual destination of Loyalists fleeing the Siege of Ninety Six during the American Revolutionary War. In 1861, along with the township of Douglas, Nova Scotia, the Rawdon township became part of the newly-formed Municipal District of East Hants, along with neighbouring townships.

Lancey may refer to: 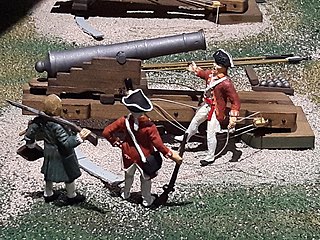 The King's Orange Rangers, also known as the Corps of King's Orange Rangers, were a British Loyalist battalion, raised in 1776 to defend British interests in Orange County, Province of New York and generally in and around the New York colony, although they saw most of their service in the Province of Nova Scotia. The battalion's commander was Lieutenant Colonel John Bayard. The Rangers had an undistinguished military record, through most of its existence, and saw very limited combat, mostly against Patriot privateers, but did play an important role in the defence of the colony of Nova Scotia in the later years of the American Revolution. The King's Orange Rangers are especially remembered for their role in the defence of Liverpool, in the Nova Scotia colony.

Brigadier General Francis McLean was a British army officer, one of two sons of Captain William Maclean and Anne Kinloch. He became famous for defending New Ireland (Maine) against the Penobscot Expedition during the American Revolution. The defeat of the Expedition was a noted British victory of the American Revolution. He was in command of the 74th Regiment of (Highland) Foot and 82nd Regiment of Foot (1778). He died 4 May 1781 at Halifax, Nova Scotia and is buried in the crypt of St. Paul's Church (Halifax). McLean never married.

Stephen de Lancey was Chief Justice of the Bahamas and Governor of Tobago. 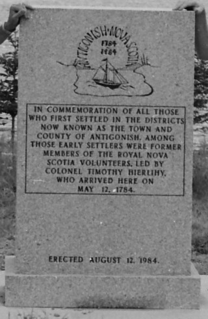 Timothy Hierlihy (1734–1797) was a British officer who protected the British coal mines at Sydney Mines, Nova Scotia from attacks by American privateers. He also was the first British settler of Antigonish, known as the "founder of Antigonish." Hierlehy also became the commander of the Royal Nova Scotia Volunteer Regiment.

Major General Samuel Birch was an officer in the British army during the American Revolution that served as the commandant of New York City. He helped free and shelter thousands of slaves as recorded in the Book of Negroes. He was the commander of the 17th Regiment of (Light) Dragoons, the only British cavalry regiment in America. He participated in most of the significant engagements in the north. He is known for leading the failed attempt to kidnap George Washington.