Detlef Soost (born 2 July 1970), also using the name D! (formerly Dee!), most often called Detlef D! Soost, is a German television personality, dancer and choreographer who gained recognition as one of the jury members of the German talent show Popstars .

Soost was born East Berlin, East Germany, and grew up in an orphanage. His mother, who died very early, was a German, and his father came to East Germany from Ghana.

According to the biography on his homepage, Soost became streetdance champion of East Berlin when he was 15 years old, and champion of East Germany when he was 16, but some critics point out that, based on his date of birth given in the same biography, this appears very unrealistic, as streetdance was not accepted in East Germany and no "official" battles could be held in which Soost could have won a title. However, there is no doubt that Soost in this time was one of the most important people in (East) Berlin's streetdance scene.[ citation needed ]

In 2005, Soost published his autobiography Neger – Heimkind – Pionier ("Negro – Orphan – Pioneer"). In this book, among other things, he also writes about his ethnic background and the problems caused by it. Soost describes himself as "Schoki", a childish word for chocolate. In the years after the German reunification, he started a career as a professional choreographer and dance teacher. Later, he founded a network of dancing schools under the brand D!s Dance Club. He owns a "Coaching and Casting Center" in Berlin-Mitte. He also produces dance music and develops choreographies for the "D!s Dance Clubs" and other dancers under the brand D!Nation.

Soost has been the choreographer and head of jury in every season of the German version of Popstars , broadcast by ProSieben. He also presents a similar program called MusicStar on Swiss SF DRS. In 2005, he presented Super Illu TV on MDR. In 2005/06, Soost also worked for ProSieben, presenting Lebe Dein Leben! – Live-Coaching mit Detlef D! Soost, before the show got canceled due to TV ratings. On the German music television channel VIVA, Soost hosted, presented and led all four seasons (2005–2008) of the casting show DanceStar. [1]

Soost also took part in the ProSieben reality show Die Alm – Promischweiß und Edelweiß in 2004, a show in which several lesser known German celebrities had to live and work on an "alm" in the Alps, and the audience could vote for a winner. After the regular time of the show, Soost was close to winning, but had to leave the show when it was extended, because of other projects. In 2007, he won the German version of the Gameshow Marathon on ProSieben.

Soost has two children from an earlier relationship; daughter Chani, who was born in April 2006, and son Carlos, born in July 2007. Since 2009, he has been married to British singer Kate Hall. [2]

Stefan Konrad Raab is a German television producer, businessman, musician, and former entertainer and television host. From 1999 to 2015, he hosted the late-night comedy talk show TV total and has also created a number of other television shows, such as Schlag den Raab and Bundesvision Song Contest.

Nu Pagadi was a German pop band, formed in December 2004 on the fourth season of international reality television program Popstars. Originally a quartet, from May 2005 a trio, the group described their own musical style as "glam rock". In September 2005, only ten months after the band's formation, the members announced their official split due to musical differences. 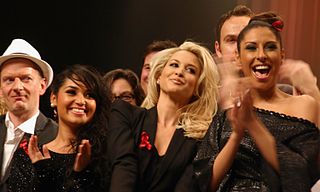 Monrose was a German pop girl group, first established in November 2006. Formed on the fifth installment of the German adaption of the international television talent show Popstars, the trio consisted of singers Mandy Capristo, Senna Gammour, and Bahar Kızıl. They were signed to Starwatch Music and released their debut album Temptation in December 2006. It achieved major success throughout Central Europe, selling more than a 600,000 copies combined and produced two singles, including number-one breakthrough hit "Shame" and "Even Heaven Cries".

Overground was a boy band from Germany. The original group comprised singers Akay Kayed, Ken Miyao, Marq Porciuncula and Meiko Reißmann. Created through the ProSieben talent show Popstars – Das Duell (2003) in which pop groups of both genders competed against each other, Overground won over girl band Preluders in a public vote. Their debut single "Schick mir 'nen Engel" became a number-one hit in Austria, Germany and Switzerland, while parent album It's Done (2003) reached the top spot in Germany and Switzerland and was eventually certified platinum by the Bundesverband Musikindustrie (BVMI).

The Preluders were a pop girl group from Germany. The original group comprised singers Tertia Botha, Miriam Cani, Anh-Thu Doan, Rebecca Miro, and Anne Ross. Created through the ProSieben talent show Popstars – Das Duell (2003), in which male and female pop groups competed against each other, Preluders lost out to boy band Overground in a public vote. Despite their defeat, the group achieved commercial success with their first single "Everyday Girl", which became a number-one hit in Germany, while their full-length debut album Girls in the House (2003) reached the top five in Germany and Switzerland. 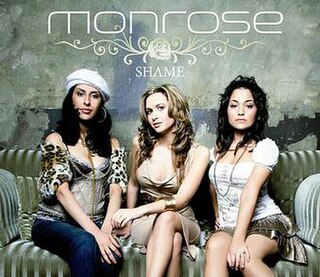 "Shame" is a song by all-female German pop group Monrose, recorded for the band's debut studio album, Temptation (2006). It was written by Christian Ballard, Tim Hawes, Pete Kirtley and Andrew Murray, while joint production was helmed by British production teams Jiant and Snowflakers. Set against a heavy drum pattern and computerized synths sounds, "Shame" is a piano ballad arranged as a mid-tempo with pop and R&B influences. The song's lyrics are about the breakdown of a relationship with a man, with the protagonist blaming her own mistakes, including her ongoing call for independence, for their separation.

Fernanda Brandão Gonçalves da Silva is a Brazilian singer and dancer based in Munich, Germany. She became famous under her stage name Laava, then with Latin pop trio, Hot Banditoz.

Room 2012 was a German pop quartet that originated in late 2007 on the sixth installment of the German talent show Popstars.

Queensberry was an all-female German pop group founded in late 2008. Formed during the seventh season of the television talent show Popstars, Popstars – Just 4 Girls, the original line-up consisted of singers Leonore Bartsch (Leo), Gabriella De Almeida Rinne (Gabby), Antonella Trapani (Anto), and Victoria Ulbrich (Vici). In July 2010, it was announced that both Antonella and Victoria had left the group, to be replaced by new members, Selina Herrero and Ronja Hilbig. 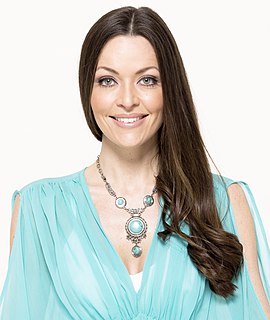 Kate Hall is a Danish-British singer living in Germany. 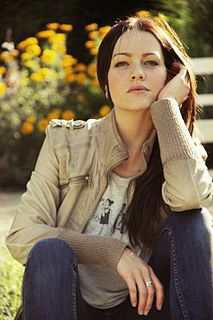 Kristina Dörfer, also known by the stage name KR!S or Kris, is a German singer and television actress.

Popstars: Girls forever is the ninth season of the German TV show Popstars, in which young aspiring female singers/dancers competed in order to claim their spots to make it into the next girl group. The contestants, who also lived together during the course of the series, were groomed and judged by choreographer Detlef D! Soost, and were judged on their vocal and dancing ability by manager Thomas Stein, who had previously been a judge on the first two seasons of Deutschland sucht den Superstar, and "Die Happy"-singer Marta Jandová, who is also about to write songs for the final band. This is the format for the ninth season of the Popstars series, focusing mostly on female dancers/singers, looking for fame in the music industry. This season's catch phrase is "Follow the Star". The season's promotional songs were Gabriella Cilmi's "On a Mission" redeemed by Monrose with "This Is Me", which also serves as the opening theme.

Popstars – Just 4 Girls is the seventh season of Popstars, a German reality TV show, in which young aspiring female singers/dancers compete in order to claim a place in the next girl group. The contestants, who also live together during the course of the show, are groomed and judged by the choreographer Detlef D! Soost, and are judged on their vocal and dancing ability by rapper Sido and singer Loona. The grand prize for the four winners is a record deal with Warner Music Group as well as the opportunity to join The Pussycat Dolls on their next world tour. This is the format for the seventh season, focusing mostly on female dancers/singers, looking for fame in the music industry.

Popstars – On Stage: On 14 June 2007, ProSieben started the sixth installment of the series, targeting to find the "Germany's hottest live act". This time not only male and female singers were cast but also dancers who should be part of the band. Dancers and singers were sent to Füssen and took part in workshops to improve their dancing and singing skills. Four weeks passed before the producers decided to audition additional contestants in the Netherlands. All the singers went to Prague, Czech Republic, while the dancers travelled to Brussels, Belgium for another so-called "Entscheidungsshow". In October, singers and dancers reunited in a big mansion in Berlin. All contestants recorded the song "Never Give Up" that managed to reach #30 on the German singles chart. The album All Stars that combined songs of all previous shows reached number 78 on the German albums chart.

Popstars – Das Duell was an interactive reality, talent show broadcast in Germany during late 2003. It is the third German season of the international Popstars franchise. Unlike the first two seasons of Popstars, which resulted in the formation of one winning group, Popstars – Das Duell created two rival groups who competed against each other for the most records sold. This show created Overground and Preluders. This season's catch phrase is "Lebe deine Traum" which means "Live Your Dream". Winners were the male band Overground. From 11 August 2003 to 3 November 2003, there was a special magazine about Popstars on TV called "taff. – Popstars Special" every Monday at 6 pm.

In September 2001, the German version of Popstars returned with a second season, this time searching for a mixed-gender musical R&B group. More than 11,000 hopeful singers attended open television auditions in Frankfurt, Cologne, Berlin, Stuttgart, Hamburg, and Munich, conducted by choreographer Detlef "D!" Soost, producer Alex Christensen, and singer and radio host Noah Sow. Over the course of several recalls and re-recalls the three judges and vocal coach Artemis Gounaki reduced the contestants to a group of 32 who immediately travelled to Ibiza, Spain to get trained in singing, dancing, and fitness. In the end three females and five males remained who again moved into a loft in Munich to start working on their performance and publicity skills.

In fall 2000, German television network RTL2 started with the production of a German adaption of Popstars. Over the course of three months more than 4,500 hopeful female singers attended open television auditions in Hamburg, Berlin, Frankfurt, Leipzig, Cologne, Oberhausen, Stuttgart and Munich. Judged by Dutch entertainer Simone Angel, booker Mario M. Mendryzcki and Rainer Moslener, a director of A&R, thirty-two out of two hundred pre-selected girls eventually made it from the local recall shows to Majorca, Spain, to get trained in singing, dancing, and fitness. While the judges continued eliminating two or three girls each day with the help of choreographer Detlef "D!" Soost, eleven finalists remained and were sent home to prepare. In November 2000, Angel and Moslener visited each of the contestants at home to reveal whether or not they had been selected for the band. In the end five girls made it into the band: Nadja Benaissa, Lucy Diakovska, Sandy Mölling, Vanessa Petruo and Jessica Wahls. With the final members of the group in place, Popstars continued tracking the development and struggles of the new band. 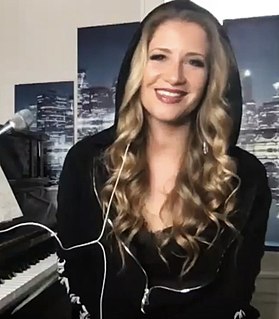 Darja Schabad is a vocalist and actress originally from Riga, Latvia.

Tiger Kirchharz is a dancer, choreographer and actress.