Don Patterson (December 26, 1909 – December 12, 1998) was an American producer, animator, and director who worked at various studios during the Golden age of American animation, including Disney, the Metro-Goldwyn-Mayer cartoon studio, Walter Lantz Productions, and Hanna-Barbera. He was the older brother of animator Ray Patterson.

Patterson began his career in the early 1930s as an in-betweener at the Charles Mintz Studio, [1] and then moved to the Walter Lantz Studio. [2]

He began working at the Walt Disney Animation Studios in the 1940s, contributing to four theatrical films: Fantasia , Dumbo , The Three Caballeros and Make Mine Music .

In the early 1950s, Patterson returned to the Lantz studio and became one of Lantz's four key animators, along with Ray Abrams, Laverne Harding and Paul Smith. [2]

Leonard Maltin says in Of Mice and Magic, "Don Patterson was the first of Lantz's animation team to try directing, and he showed great aptitude for the assignment. His shorts are among the best of the early-1950s product, showing deft handling of characters and snappy timing. In 1952 he 'supervised' one of the best Woody Woodpecker cartoons of all time, Termites from Mars ." [2] Patterson also directed Hypnotic Hick (1953), Socko in Morocco and Alley to Bali (both 1954).

United Productions of America, better known as UPA, was an American animation studio active from the 1940s through the 1970s. Beginning with industrial and World War II training films, UPA eventually produced theatrical shorts for Columbia Pictures such as the Mr. Magoo series. In 1956, UPA produced a television series for CBS, The Boing-Boing Show, hosted by Gerald McBoing Boing. In the 1960s, UPA produced syndicated Mr. Magoo and Dick Tracy television series and other series and specials, including Mister Magoo's Christmas Carol. UPA also produced two animated features, 1001 Arabian Nights and Gay Purr-ee, and distributed Japanese films from Toho Studios in the 1970s and 1980s. Gerald McBoing-Boing (2005–2007) was a more recent television series based on UPA's memorable character and licensed and co-produced by Cookie Jar Entertainment and Classic Media, for Cartoon Network. A French-American reboot television series of Mr. Magoo, another one of UPA's memorable characters has been announced by Xilam as their first collaboration with DreamWorks Animation, and is set to premiere on France 3 in France and Universal Kids.

Walter Lantz Productions was an American animation studio. It was in operation from 1928 to 1972, and was the principal supplier of animation for Universal Studios, now part of the media conglomerate NBCUniversal, owned by Comcast. Nowadays the company exists in name only as a subsidiary of Universal Animation Studios, handling the rights to the studio's characters and films.

Bosko is an animated cartoon character created by animators Hugh Harman and Rudolf Ising. Bosko was the first recurring character in Leon Schlesinger's cartoon series, and was the star of 39 Looney Tunes shorts released by Warner Bros. He was voiced by Carman Maxwell, Johnny Murray, and Billie Thomas during the 1920s and 1930s, and once by Don Messick during the 1990s. 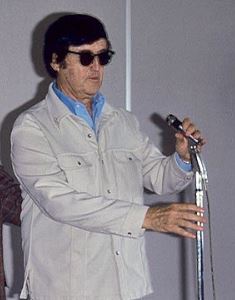 Robert Emerson Clampett Sr. was an American animator, producer, director, and puppeteer best known for his work on the Looney Tunes animated series from Warner Bros. as well as the television shows Time for Beany and Beany and Cecil. Clampett was born and raised not far from Hollywood and, early in his life, expressed an interest in animation and puppetry. After leaving high school a few months shy of graduating in 1931, Clampett joined the team at Harman-Ising Productions and began working on the studio's newest short subjects, titled Looney Tunes and Merrie Melodies. 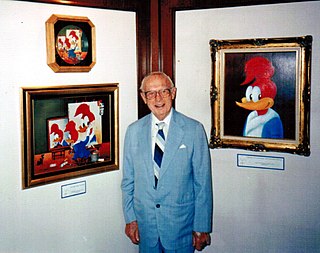 Humphrey the Bear is a cartoon character created in 1950 at Walt Disney Animation Studios. He first appeared in the 1950 Goofy cartoon Hold That Pose, in which Goofy tried to take his picture. After that he appeared in four classic Donald Duck cartoons: Rugged Bear (1953), Grin and Bear It (1954), Bearly Asleep (1955), and Beezy Bear (1955).

Leonard Michael Maltin is an American film critic and film historian, as well as an author of several mainstream books on cinema, focusing on nostalgic, celebratory narratives. He is best known for his eponymous annual book of movie capsule reviews, Leonard Maltin's Movie Guide, which was published annually from 1969 to 2014. 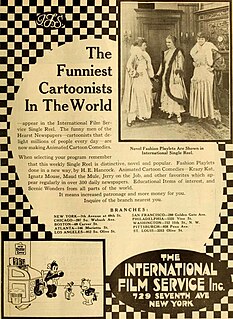 Bosko, the Talk-Ink Kid is a 1929 live-action/animated short film produced to sell a series of Bosko cartoons. The film was never released to theaters, and therefore not seen by a wide audience until 2000 on Cartoon Network's television special Toonheads: The Lost Cartoons. The film was produced in May 1, 1929 and directed by Hugh Harman and Rudolf Ising.

Preston Erwin Blair was an American character animator, best remembered for his work at Walt Disney Productions and the Metro-Goldwyn-Mayer cartoon studio.

Ray Abrams was an American animator and director. Abrams worked on several major animations during the 1930s. He began his career as an animator at the Metro-Goldwyn-Mayer cartoon studio, Walter Lantz Productions and Hanna-Barbera.