Eccellenza Abruzzo is the regional Eccellenza football division for clubs in Abruzzo, Italy. It is competed amongst 18 teams and the winner is promoted to Serie D (usually to Girone F). The clubs that finishes between the second and the fifth place also have a chance to gain promotion. The winner of the regional play-off is entered into a national round which consists of two matches.

L'Aquila also awarded promotion due to its inability to complete the league following the 2009 L'Aquila earthquake; the club was topping the league with Miglianico after Week 32, but was exempted from playing last two games 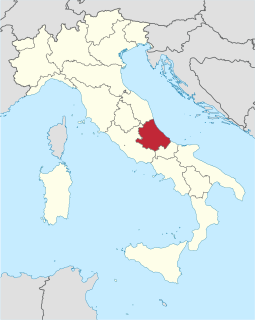 Abruzzo or Abruzzi is a region of Southern Italy with an area of 10,763 square km and a population of 1.3 million. It is divided into four provinces: L'Aquila, Teramo, Pescara, and Chieti. Its western border lies 80 km (50 mi) east of Rome. Abruzzo borders the region of Marche to the north, Lazio to the west and north-west, Molise to the south and the Adriatic Sea to the east. Geographically, Abruzzo is divided into a mountainous area in the west, which includes the Gran Sasso d'Italia, and a coastal area in the east with beaches on the Adriatic Sea.

The Top10, known as the Peroni Top10 for sponsorship reasons, and formerly Top 12, is Italy's top level professional men's rugby union competition. The Top 10 is run by Federazione Italiana Rugby (FIR) and is contested by 10 teams as of the 2019-2020 season, following the Italian federation's decision to name Peroni as the official partner of the Top10 competition.

Castel di Sangro Calcio is an Italian association football club from Castel di Sangro in the Province of L'Aquila, Abruzzo. They currently play in Promozione Molise, at the sixth tier of Italian football.

L'Aquila Calcio 1927 is an Italian association football club located in L'Aquila, Abruzzo. They currently play in the Serie D.

Eccellenza Friuli-Venezia Giulia is the regional Eccellenza football division for clubs in the northern Italian region of Friuli-Venezia Giulia, Italy. It is competed amongst 16 teams, in one group. The winners of the Groups are promoted to Serie D. The club who finishes second also have the chance to gain promotion; they are entered into a national play-off which consists of two rounds.

Eccellenza Tuscany is the regional Eccellenza football division for clubs in Tuscany, Italy. It is competed amongst 32 teams, in two different groups. The winners of the Groups are promoted to Serie D. The club who finishes second also have the chance to gain promotion, they are entered into a national play-off which consists of two rounds.

Serie D, the fifth level of Italian Football, is usually composed of 162 teams divided into nine 18-team divisions. Special relegation of four teams from the professional leagues above Serie D after the team list had been set increased the total number of teams for this season to 166. One division will have 20 teams, two will have 19, while the other six will remain at 18 teams.

This is a list of division winners and playoff matches in the regionally organized Eccellenza 2008–2009, which is the 6th level of Italian football. A total of 36 teams are promoted to Serie D for the 2009–10 season.

The 2009–10 Serie D was the sixty-second edition of the top level Italian non-professional football championship. It represented the fourth tier in the Italian football league system. It consisted of 167 divided into six 18-team divisions, one 19-team division and two 20-team divisions.

Tourism in Abruzzo has become one of the most prosperous sectors in the economy of Abruzzo, and in recent years has seen a remarkable growth attracting numerous tourists from Italy and Europe. According to statistics from the Italian institute of statistics (ISTAT), in 2007 arrivals totaled 1,371,155 Italians and 189,651 foreigners. A total of 7,374,646 arrivals were tourists, a figure that puts the region seventeenth among the Italian regions for numbers of tourists per year. According to market analysis and sector studies on tourism in the Abruzzo National Society TurisMonitor 2012, after an increase that was estimated at between 4 and 5% of international tourist arrivals in the Abruzzo region in 2012 was estimated to increase that international arrivals will be around 3/4% by the end of 2012 with staff working in tourism will increase settling at about 25,000 people. Always position first-arrivals from Germany. A moderate support to tourism is also given to the Abruzzo Airport with many low cost and charter flights connecting the entire region with the rest of Europe. Abruzzo tourism can basically be divided into three different types: mountain tourism hiking natural which includes numerous ski resorts, nature reserves and protected areas, beach tourism and coastal with the number of resort, hotel, camping and beaches, and finally the art-historical tourism religious and cultural concentrated mostly in mountain villages and historic towns such as l'Aquila, Vasto, Chieti, Teramo, Sulmona and many others.