Eccellenza Umbria is the regional Eccellenza football division for clubs in the northern Italian region of Umbria, Italy. It is competed among 16 teams, in one group. The winners of the Groups are promoted to Serie D. The club who finishes second also have the chance to gain promotion, they are entered into a national play-off which consists of two rounds.

Here are the past champions of the Umbria Eccellenza, organised into their respective seasons. [1]

Città di Castello is a city and comune in the province of Perugia, in the northern part of Umbria. It is situated on a slope of the Apennines, on the flood plain along the upper part of the river Tiber. The city is 56 km (35 mi) north of Perugia and 104 km (65 mi) south of Cesena on the motorway SS 3 bis. It is connected by the SS 73 with Arezzo and the A1 highway, situated 38 km (23 mi) west. Città di Castello has an exclave named Monte Ruperto within Marche.

Trasimène[tʁa.si.mɛn] was a department of the First French Empire from 1809-1814 in present-day Italy. It was named after Lake Trasimeno. It was formed on 15 July 1809, when the Papal States were annexed by France. Its capital was Spoleto. 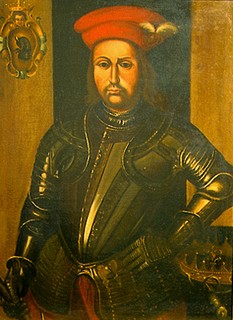 There are 70 community bands, 110 community choirs, and about 20 secondary music schools. The region is famous for its music festivals, including the Festival dei Due Mondi in Spoleto and the Umbria Jazz Festival.

Sant'Angelo in Vado is a comune (municipality), site of Ancient Tifernum Metaurense and former bishopric in the Province of Pesaro e Urbino in the central Italian Adriatic region Marche.

The Coppa Italia Dilettanti is an annual knock-out competition for teams from the fifth and sixth levels of Italian football: the Eccellenza and the Promozione. All ties except for the final, which is held at the Stadio Flaminio in Rome, are played on a home-and-away basis. The cup-winners are also awarded promotion to Serie D, the fourth-ranked league.

Cassa di Risparmio di Foligno or Carifol in short, is a former Italian regional bank based in Foligno, Umbria. A subsidiary of Intesa Sanpaolo, the bank was merged with 3 other saving banks in Umbria to form Casse di Risparmio dell'Umbria in 2012.

Cesare Sermei was an Italian painter. Son of painter Fernando Sermei, he learned to paint in the workshop of Cesare Nebbia, primarily moving between Orvieto and Rome.

A.S.D. Nocerina 1910, known as Nocerina and formerly known as Città di Nocera, is an Italian football club based in Nocera Inferiore, Campania. The club was founded in 2015 by using the sports title of Città di Agropoli, after the major club of the city, A.S.G. Nocerina withdrew from the football leagues. The club currently plays in Serie D.

Ferrovia Centrale Umbra (FCU) is a railway line in Umbria, Italy. The line, about 147 kilometres (91 mi) in length, connects Terni in southern Umbria with Sansepolcro, Tuscany, with stops in Todi, Perugia, Umbertide and Città di Castello. It is operated by Busitalia, a subsidiary of the Ferrovie dello Stato Italiane group.

Dante Viviani was an Italian architect, active mainly in Umbria and his native Tuscany.