Eccellenza Liguria is the regional Eccellenza football division for clubs in the northern Italian region of Liguria. It consists of 16 teams competing in one group. The winning team is promoted to Serie D, the top level of Italian amateur football. The club that finishes second may also gain promotion by taking part in a two-round national play-off.

The past champions of Eccellenza Liguria were: [1] 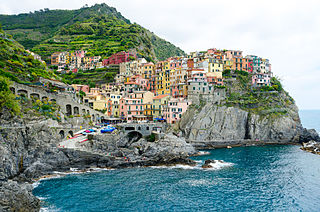 The Italian Riviera or Ligurian Riviera is the narrow coastal strip in Italy which lies between the Ligurian Sea and the mountain chain formed by the Maritime Alps and the Apennines. Longitudinally it extends from the border with France and the French Riviera near Ventimiglia eastwards to Capo Corvo which marks the eastern end of the Gulf of La Spezia and is close to the regional border between Liguria and Tuscany. The Italian Riviera thus includes nearly all of the coastline of Liguria. Historically the "Riviera" extended further to the west, through what is now French territory as far as Marseille. 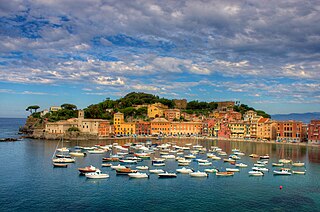 Sestri Levante is a town and comune in the Metropolitan City of Genoa, Liguria, Italy. Lying on the Mediterranean Sea, it is approximately 56 km south of Genoa and is set on a promontory. While nearby Portofino and the Cinque Terre are probably the best-known tourist destinations on the Italian Riviera, Sestri Levante is becoming quite a favorite among Italians. This once quiet fishing village is slowly turning into a tourist hotspot, developing an old and a new town.

Società Sportiva Dilettantistica Sanremese Calcio, commonly referred to as Sanremese, is an Italian association football club, based in Sanremo, Liguria.

U.S. Imperia 1923 S.r.l. was an Italian football club based in Imperia, Liguria. A.S.D. Imperia, based on the same city, being the major team of Imperia since 2008.

Roberto Biffi is a former Italian footballer in the role of centre back and current coach.

Fratellanza Sportiva Sestrese Calcio 1919 is an Italian football club located in Sestri Ponente, a suburb of Genoa, Liguria. It currently plays in Eccellenza Liguria, having last been in Serie B in 1947.

Virtus Entella, commonly referred to as Entella, is a professional football club based in Chiavari, Liguria, Italy. They currently play in Serie C.

A.S.D. Chiavari Calcio Caperana was an Italian association football club, based in Caperana, a frazione of Chiavari, Liguria.

Paolo Ponzo was an Italian footballer who last played as a midfielder for Liguria club Imperia.

Associazione Sportiva Dilettantistica Imperia commonly referred to as simply Imperia, is an Italian association football club located in Imperia, Liguria and since 13 July 2012, after the disappearance from football of the former Imperia Calcio, the club is the main team of the city.

Riccardo Gagliolo is a professional footballer who plays as a left back for Serie B club Parma. Born in Italy to an Italian father and a Swedish mother, he has decided to represent Sweden on the international level. 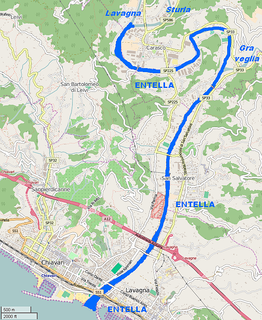 The Entella is a very short river within the Metropolitan City of Genoa in the Liguria region of northwestern Italy.

Tigullio is a traditional region and a gulf in the Metropolitan City of Genoa, Liguria, northern Italy. Part of the Riviera di Levante, it includes the communes of Portofino, Santa Margherita Ligure, Rapallo, Zoagli, Chiavari, Lavagna and Sestri Levante. The name derives from the ancient Ligurian tribe, Tigullii.

Davide Sancinito is an Italian footballer who plays as a midfielder for Serie D side A.S.D. Imperia.

Sestri Levante railway station is located on the Genoa–Pisa railway. It serves the town of Sestri Levante, Italy.

The 2019–20 Coppa Italia Dilettanti was the 55th edition of Coppa Italia Dilettanti. Participants in the competition include all teams of 2019–20 Eccellenza and some teams of 2019–20 Promozione, the fifth and sixth tier of the Italian football pyramid, respectively. The winner of the competition were promoted to 2020–21 Serie D.