Telekom Electronic Beats (TEB) is an international music marketing program of Deutsche Telekom AG focusing on electronic music and international club culture. The program was founded in 2000. It comprises a media portfolio and has been organizing events such as concerts, festivals and club nights with mainly electronic music artists throughout Europe. [1]

TEB's media portfolio and formats have changed and developed since the start of the program:

“Electronic Beats TV” is one of the longest running video magazines in electronic music. The format started in 2000 with a weekly TV show moderated by Ill-Young Kim and broadcast by VIVA and Viva Zwei. [2] From 2005, it was published as a quarterly DVD magazine called Slices. [3] The DVDs were available for free through distribution in boutiques, cafés, bars, clubs etc. mainly in Central and Eastern Europe. Since 2015, all content is hosted on Youtube. [4] In February 2018, TEB’s YouTube channel was awarded the YouTube Silver Creator Award for more than 100.000 subscribers.

The online magazine .net was launched in 2001. It offers news, single and album reviews, longform articles as well as podcasts, audio and video features on electronic dance music and club culture.

In 2005, the English-language Electronic Beats Magazine started. The quarterly print publication revolved around music, culture and travel subjects. [5] Like Slices, it was available for free through distribution in boutiques, cafés, bars, clubs etc. mainly in Central and Eastern Europe. The final issue was published in late 2015.

In 2011, Electronic Beats extended its work to Poland, launching a website in Polish and hosting events in the biggest cities throughout the country.

In 2017, TEB created the app “The Lenz” together with Gorillaz.

The Electronic Beats live music events are a series of club nights, concerts and festivals hosted in cities throughout Europe.

In 2004, the "Electronic Beats Stereo Deluxe Spring Tour" took place. That same year during Popkomm there are also three event nights featuring Rammstein, Virginia Jetzt!, Phillip Boa, Tiefschwarz and Mocky among others in the former Palace of the Republic. 2raumwohnung, MIA. and Chicks on Speed played at an Electronic Beats Live Special during the Bonner T-Mobile Forum.

In 2005, there were Electronic Beats Festivals with Faithless, Stereo MCs, Zoot Woman, GusGus and The Prodigy in Cologne, Edinburgh, Vienna and Amsterdam. Additionally the Electronic Beats Sundowner Tour takes place in Budapest, Vienna, Berlin, Hamburg, Brighton, Munich, Zagreb and Amsterdam. Moreover, there was “The Night is White/Casa Relax Launch Party” in Ibiza which was held in collaboration with Sony Ericsson.

2007 saw Electronic Beats Festivals with Soulwax (as 2 Many DJs), Goldie, Kelis and Felix da Housecat in Vienna and Budapest as well as another club tour with Ian Pooley, Howard Donald and Tonka in Croatia.

In 2017, four shows with Gorillaz were held in Warsaw, Budapest, Katowice and Cologne.

Since 2017, there’s an ongoing TEB Clubnight series in clubs throughout Germany. It features live appearances by artists such as Ata, Mr. G., Inga Mauer, Hodge, FJAAK and many more. Clubs that host TEB Clubnights include Institut fuer Zukunft in Leipzig, PAL in Hamburg, Blitz Club in Munich, White Noise in Stuttgart, Gewölbe in Cologne, Klub Neu in Dresden, Galerie Kurzweil in Darmstadt, Studio Club in Essen, Oma Doris in Dortmund among others.

Since its inception TEB has won many international publishing and marketing awards, including

A technoparade is a parade of vehicles equipped with strong loudspeakers and amplifiers playing Electronic dance music. It resembles a carnival parade in some respects, but the vehicles are usually less elaborately decorated. Unlike some carnival parades, a technoparade does not share the tradition of bombarding the spectators with sweets. However, the revellers do occasionally throw confetti and spray foam from the vehicles onto the crowd.

Wickeda were a Bulgarian rock band. They were quite popular in Bulgaria, and occasionally topped the charts. Their style comprised punk, ska, reggae, funk and some traditional Bulgarian folk music elements. The witty lyrics filled with wordplay dealing mainly with stories from everyday life and the danceable tunes with memorable hooks largely contributed to the band's success.

The International Association of Wagner Societies is an affiliation of Wagner societies that promotes interest and research into the works of Richard Wagner, raises funds for scholarships for young music students, singers, and instrumentalists, and supports the annual Bayreuth Festival. It also sponsors symposia, holds singing competitions for Wagnerian voices, and issues awards for stage direction and stagings of Wagner's operas. The association is a nonprofit organization.

Nevio Passaro is a German–Italian singer, songwriter and producer, who uses the Italian, German and English language for his self-composed music.

The Budapest Festival Orchestra was formed in 1983 by Iván Fischer and Zoltán Kocsis, with musicians "drawn from the cream of Hungary's younger players", as The Times put it. Its aim was to make the orchestra's concerts into significant events in Hungary's musical life, and to give Budapest a new symphony orchestra of international standing.

Jahcoozi is a bass-heavy electronica trio made up of London-born, Sri Lankan heritage songwriter and front woman Sasha Perera and two producers and instrumentalists, Robot Koch and Tel-Aviv born Oren Gerlitz. The band met and formed in Berlin in 2002 and have released three albums. 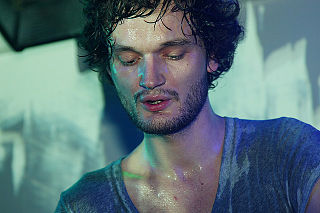 Sascha Ring, better known by the stage name Apparat, is a German electronic musician. He was previously co-owner of Shitkatapult records. Starting out with dancefloor-oriented techno, he shifted focus towards ambient music, becoming "more interested in designing sounds than beats".

Wallis Bird is an Irish musician. She has released six studio albums, including Architect in 2014 and Home in 2016.

Pinchas Steinberg is a conductor born in Palestine. He is currently the Chief Conductor of the Budapest Philharmonic Orchestra.

Speaking in Code is a character-based documentary directed by Amy Grill about people who are lost in the electronic music lifestyle.

think: act is a publication title created by Roland Berger Strategy Consultants. Since 2004, various kinds of publications for international leaders have been collected under the brand think: act. Among these are magazines, information brochures and books. 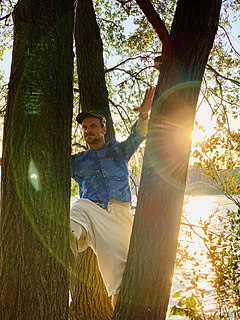 Ádám Jávorkai is a Hungarian cellist, currently living in Vienna.

Melt! Festival is one of the biggest open-air electronic music festivals in Germany. The festival takes place at the Ferropolis open-air museum, near Gräfenhainichen. It has been held since 1997.

André de Ridder is a German conductor of classical music based in Berlin and working all over the world.

Fran Palermo is a Hungarian indie rock band. It was formed by the singer-songwriter Henri Gonzo in late 2011 in Budapest, Hungary. The band’s music and style are characterized by different genres, mostly by indie, rock and roll, afro pop and even by Mediterranean vibes. The unique and original soundscape requires a bigger band on the stage. The specialty of the band comes not just from mixing different instruments, but from the diverse origin of the members. They have a vivid inherited cultural background such as Cuban, Spanish, Greek and Hungarian. By now Fran Palermo has become one of Budapest’s main concert bands, owning numerous loyal fans. 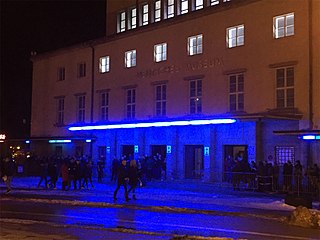 The Blitz Club is a techno nightclub in the Munich district of Ludwigsvorstadt-Isarvorstadt.