An emergency shelter is a place for people to live temporarily when they cannot live in their previous residence, similar to homeless shelters. The main difference is that an emergency shelter typically specializes in people fleeing a specific type of situation, such as natural or man-made disasters, domestic violence, or victims of sexual abuse. A more minor difference is that people staying in emergency shelters are more likely to stay all day, except for work, school, or errands, while homeless shelters usually expect people to stay elsewhere during the day, returning only to sleep or eat. Emergency shelters sometimes facilitate support groups, and/or provide meals.

Post-disaster emergency shelter is often provided by organizations or governmental emergency management departments, in response to natural disasters, such as a flood or earthquake. They tend to use tents or other temporary structures, or buildings normally used for another purpose, such as a church or school. These settlements may be inhabited for the entire duration of the reconstruction process and should be thought of more as settlements than shelter, and need to be planned with respect to water / sanitation, livelihoods.

One example of a mass emergency shelter is the Louisiana Superdome, which was used as a hurricane shelter during Hurricane Katrina. More than 20,000 storm refugees crowded into the arena seeking sanctuary from the winds and waters of Katrina, filling seats, ramps, corridors, and the artificial turf field. The refugees were met with a myriad of new challenges, including stifling heat, stench, filth, unsanitary facilities, and a shortage of food and drinking water. Violent assaults and rapes were reported, as well as one unconfirmed suicide. [1] [2]

The Federal Emergency Management Agency (FEMA) is an agency of the United States Department of Homeland Security, initially created by Presidential Reorganization Plan No. 3 of 1978 and implemented by two Executive Orders on April 1, 1979. The agency's primary purpose is to coordinate the response to a disaster that has occurred in the United States and that overwhelms the resources of local and state authorities. The governor of the state in which the disaster occurs must declare a state of emergency and formally request from the president that FEMA and the federal government respond to the disaster. The only exception to the state's gubernatorial declaration requirement occurs when an emergency or disaster takes place on federal property or to a federal asset—for example, the 1995 bombing of the Alfred P. Murrah Federal Building in Oklahoma City, Oklahoma, or the Space Shuttle Columbia in the 2003 return-flight disaster.

A humanitarian crisis is defined as a singular event or a series of events that are threatening in terms of health, safety or well being of a community or large group of people. It may be an internal or external conflict and usually occurs throughout a large land area. Local, national and international responses are necessary in such events. 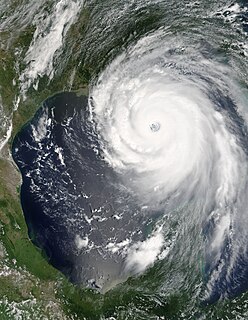 Hurricane Katrina was a Category 5 hurricane that made landfall on Florida and Louisiana in August 2005, causing catastrophic damage, particularly in the city of New Orleans and the surrounding areas, and over 1,200 deaths. Subsequent flooding, caused largely as a result of fatal engineering flaws in the flood protection system known as levees around the city of New Orleans, precipitated most of the loss of lives. The storm was the third major hurricane of the record-breaking 2005 Atlantic hurricane season, as well as the fourth-most intense Atlantic hurricane on record to make landfall in the contiguous United States, behind only the 1935 Labor Day hurricane, Hurricane Camille in 1969, and Hurricane Michael in 2018. 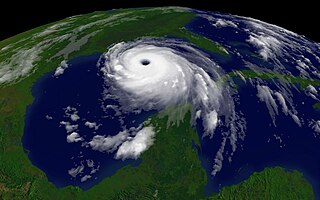 As the center of Hurricane Katrina passed southeast of New Orleans on August 29, 2005, winds downtown were in the Category 1 range with frequent intense gusts and tidal surge. Hurricane-force winds were experienced throughout the city, although the most severe portion of Katrina missed the city, hitting nearby St. Bernard and Plaquemines parishes. Hurricane Katrina made its final landfall in eastern St. Tammany Parish. The western eye wall passed directly over St. Tammany Parish, Louisiana as a Category 3 hurricane at about 9:45 am Central Time, August 29, 2005. The communities of Slidell, Avery Estates, Lakeshore Estates, Oak Harbor, Eden Isles and Northshore Beach were inundated by the storm surge that extended over six miles inland. The storm surge affected all 57 miles (92 km) of St. Tammany Parish's coastline, including Lacombe, Mandeville and Madisonville. The storm surge in the area of the Rigolets Pass was estimated to be 16 feet, not including wave action, declining to 7 feet (2.1 m) at Madisonville. The surge had a second peak in eastern St. Tammany as the westerly winds from the southern eye wall pushed the surge to the east, backing up at the bottleneck of the Rigolets Pass.

The article covers the Hurricane Katrina effects by region, within the United States and Canada. The effects of Hurricane Katrina, in August 2005, were catastrophic and widespread. It was one of the deadliest natural disasters in U.S. history, leaving at least 1,836 people dead, and a further 135 missing. The storm was large and had an effect on several different areas of North America.

The disaster recovery response to Hurricane Katrina included federal government agencies such as the Federal Emergency Management Agency (FEMA), the United States Coast Guard (USCG), state and local-level agencies, federal and National Guard soldiers, non-governmental organizations, charities, and private individuals. Tens of thousands of volunteers and troops responded or were deployed to the disaster - most in the affected area but also throughout the U.S. at shelters set up in at least 19 states.

Hurricane Katrina had many social effects, due to the significant loss and disruption of lives it caused. The hurricane left hundreds of thousands people without access to their homes or jobs, it separated people from relatives, and caused both physical and mental distress on those who suffered through the storm and its aftermath.

Canada was one of the countries to provide the most aid and relief for Hurricane Katrina. They provided ships, supplies, volunteers, search-and-rescue teams, and more. It has also accepted some evacuees to stay in Canada.

This article contains a historical timeline of the events of Hurricane Katrina on August 23-30, 2005 and its aftermath.

A disaster medical assistance team (DMAT) is a group of professional and para-professional medical personnel organized to provide rapid-response medical care or casualty decontamination during a terrorist attack, natural disaster, or other incident in the United States.

Frederick C. Cuny was an American humanitarian whose work spanned disaster relief, refugee emergency management, recovery from war and civil conflict as well as disaster and emergency preparedness, mitigation and peacebuilding. He was first and foremost a practitioner, but also a prolific author, an educator and a field-based researcher. He has been described as “a great American – a sort of universal Schindler, a man with lists of millions of people in Asia, Africa, Latin America and Europe whose lives he succored or saved.” Another tribute to Cuny claimed that he “was one of the world’s most accomplished disaster relief experts, both a pioneer and an iconoclast in the field of international humanitarian aid.”

Refugee shelters are structures ranging from the most temporary tent accommodation through transitional shelter to building temporary pics and settlements and include the most basic kind of ad hoc structure. They are created in the aftermath of a conflict or natural disaster as a temporary residence for victims who have lost or abandoned their homes. Refugees and IDPs are people fleeing their homes or countries of origin due to natural disasters, war and political or religious persecution in search of refuge and resettlement. Living in these shelters refugees may force marriage crowded, noisy, dirty, disease filled grounds where thousands of families are cramped together and surviving day by day.

Cameron Sinclair is a designer, writer and one of the pioneers in socially responsive architecture. He is currently serving as executive director of Armory of Harmony, a U.S. based organization focused on repurposing decommissioned weapons into musical instruments..

Transitional shelter is any of a range of shelter options that help people affected by conflict or natural disasters who have lost or abandoned their housing until they can return to or recover acceptable permanent accommodation. The term refers to an incremental process rather than a product, in which a shelter can be:

Islamic Relief USA (IRUSA), based in Alexandria, Virginia, is a non-profit 501(c)(3) humanitarian agency and member of the Islamic Relief Worldwide group of organizations. IRUSA was founded in California in 1993. In addition to international relief and development initiatives, Islamic Relief USA also sponsors and funds domestic projects ranging from emergency disaster responses to assisting the American homeless population and supporting those who cannot afford basic healthcare.

Solidarités International is a non-profit organization working in areas of conflict and natural disasters. Its main aim is to provide quick and effective support for people in life-threatening situations by meeting their vital needs: water, food and shelter. The organization also has a particular focus on unsafe drinking water and food insecurity among the most vulnerable populations. Solidarités International, an organization founded in 1980 by Alain Boinet under France's 1901 charity law, comprises 160 expatriate volunteers and 2180 local employees. Each year it carries out over 120 humanitarian programs in 16 countries.

Bridgette Meinhold is an American artist and author of “Urgent Architecture: 40 Sustainable Housing Solutions for a Changing World.” 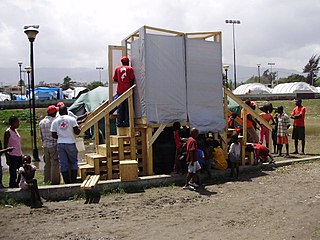