A farrier is a specialist in equine hoof care, including the trimming and balancing of horses' hooves and the placing of shoes on their hooves, if necessary. A farrier combines some blacksmith's skills (fabricating, adapting, and adjusting metal shoes) with some veterinarian's skills (knowledge of the anatomy and physiology of the lower limb) to care for horses' feet.

Historically, the jobs of farrier and blacksmith were practically synonymous, shown by the etymology of the word: farrier comes from Middle French: ferrier (blacksmith), from the Latin word ferrum (iron). [1] A farrier's work in colonial America or pre-Industrial Revolution Europe would have included shoeing horses, as well as the fabrication and repair of tools, the forging of architectural pieces, and so on. Modern-day farriers usually specialize in horseshoeing, focusing their time and effort on the care of the horse's hoof. For this reason, farriers and blacksmiths are considered to be in separate, albeit related, trades.

In the British Army, the Household Cavalry have farriers who march in parade in ceremonial dress, carrying their historical axes with spikes. They are a familiar sight at the annual Trooping the Colour. There is also a farrier on call "round the clock, twenty-four hours a day, at Hyde Park Barracks". [2]

In the United Kingdom, the Worshipful Company of Farriers is one of the Livery Companies of the City of London. The Farriers, or horseshoe makers, organised in 1356. It received a Royal Charter of incorporation in 1571. Over the years, the Company has evolved from a trade association for horseshoe makers into an organisation for those devoted to equine welfare, including veterinary surgeons.

A farrier's routine work is primarily hoof trimming and shoeing. [3] In ordinary cases, trimming each hoof so it retains proper foot function is important. If the animal has a heavy work load, works on abrasive footing, needs additional traction, or has pathological changes in the hoof or conformational challenges, then shoes may be required. Additional tasks for the farrier include dealing with injured or diseased hooves and application of special shoes for racing, training, or "cosmetic" purposes. Horses with certain diseases or injuries may need remedial procedures for their hooves, or need special shoes. [4]

In countries such as the United Kingdom, people other than registered farriers cannot legally call themselves a farrier or carry out any farriery work (in the UK, this is under the Farriers (Registration) Act 1975). [12] The primary aim of the act is to "prevent and avoid suffering by and cruelty to horses arising from the shoeing of horses by unskilled persons".

However, in other countries, such as the United States, farriery is not regulated, no legal certification exists, [13] and qualifications can vary. In the US, four organizations - the American Farrier's Association (AFA), the Guild of Professional Farriers (GPF), the Brotherhood of Working Farriers, and the Equine Lameness Prevention Organization (ELPO) - maintain voluntary certification programs for farriers. Of these, the AFA's program is the largest, with about 2800 certified farriers.[ citation needed ] Additionally, the AFA program has a reciprocity agreement with the Farrier Registration Council and the Worshipful Company of Farriers in the UK.

Within the certification programs offered by the AFA, the GPF, and the ELPO, all farrier examinations are conducted by peer panels. The farrier examinations for these organizations are designed so that qualified farriers may obtain a formal credential indicating they meet a meaningful standard of professional competence as determined by technical knowledge and practical skills examinations, length of field experience, and other factors. [14] [15] Farriers who have received a certificate of completion for attending a farrier school or course may represent themselves as having completed a particular course of study. Sometimes, usually for purposes of brevity, they use the term "certified" in advertising.

Where professional registration exists, on either a compulsory or voluntary basis, a requirement for continuing professional development activity often exists to maintain a particular license or certification. For instance, farriers voluntarily registered with the American Association of Professional Farriers require at least 16 hours of continuing education every year to maintain their accreditation. [16] 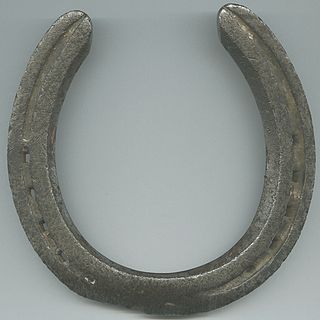 A horseshoe is a fabricated product, normally made of metal, although sometimes made partially or wholly of modern synthetic materials, designed to protect a horse hoof from wear. Shoes are attached on the palmar surface of the hooves, usually nailed through the insensitive hoof wall that is anatomically akin to the human toenail, although much larger and thicker. However, there are also cases where shoes are glued.

The Worshipful Company of Farriers is one of the Livery Companies of the City of London. The Farriers, or horseshoe makers, organised in 1356. It received a Royal Charter of incorporation in 1674. Over the years, the Company has evolved from a trade association for horseshoe makers into an organisation for those devoted to equine welfare, including veterinary surgeons. It also supports general charities, as do other Livery Companies. 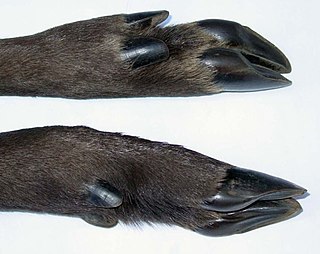 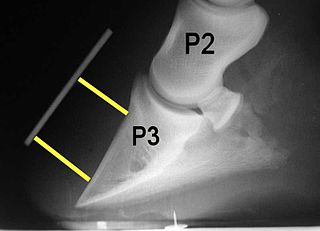 Laminitis is a disease that affects the feet of ungulates and is found mostly in horses and cattle. Clinical signs include foot tenderness progressing to inability to walk, increased digital pulses, and increased temperature in the hooves. Severe cases with outwardly visible clinical signs are known by the colloquial term founder, and progression of the disease will lead to perforation of the coffin bone through the sole of the hoof or being unable to stand up, requiring euthanasia.

Navicular syndrome, often called navicular disease, is a syndrome of lameness problems in horses. It most commonly describes an inflammation or degeneration of the navicular bone and its surrounding tissues, usually on the front feet. It can lead to significant and even disabling lameness.

Jaime Jackson is a horse hoof care lecturer, author, and researcher on wild and domestic horse hooves. He is best known for the practice of natural hoof care first written about in The Natural Horse: Lessons from the Wild (1992).

Dr. Hiltrud Strasser is a German veterinarian, who has worked for many years on the anatomy, physiology, pathology, and rehabilitation of horses' feet. She has published papers and books on this topic since the 1980s. 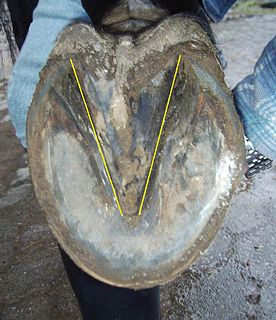 The frog is a part of a horse's hoof, located on the underside, which should touch the ground if the horse is standing on soft footing. The frog is triangular in shape, and extends mid way from the heels toward the toe, covering around 25% of the bottom of the hoof. It acts as a shock absorber for the foot when it makes impact with the ground, decreasing the force placed on the bones and joints of the leg. 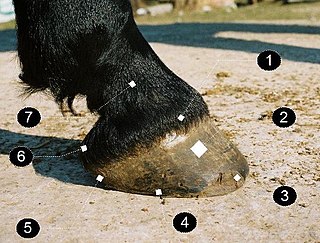 A horse hoof is a structure surrounding the distal phalanx of the 3rd digit of each of the four limbs of Equus species, which is covered by complex soft tissue and keratinised (cornified) structures. Since a single digit must bear the full proportion of the animal's weight that is borne by that limb, the hoof is of vital importance to the horse. The phrase "no hoof, no horse" underlines how much the health and the strength of the hoof is crucial for horse soundness. 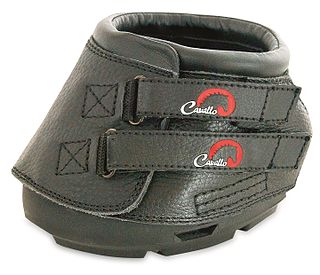 A hoof boot is a device made primarily of polyurethane and is designed to cover the hooves of a horse as an alternative to, and occasionally in addition to, horseshoes. Hoof boots can also be used as a protective device when the animal has a hoof injury that requires protection of the sole of the hoof, or to aid in the application of medication. There are many different designs, but all have the goal of protecting the hoof wall and sole of the horse's hoof from hard surfaces, rocks and other difficult terrain.

Equine podiatry is the study and management of the equine foot based on its anatomy and function. 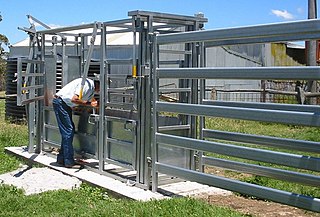 A cattle crush, squeeze chute, standing stock, or simply stock is a strongly built stall or cage for holding cattle, horses, or other livestock safely while they are examined, marked, or given veterinary treatment. Cows may be made to suckle calves in a crush. For the safety of the animal and the people attending it, a close-fitting crush may be used to ensure the animal stands "stock still". The overall purpose of a crush is to hold an animal still to minimise the risk of injury to both the animal and the operator while work on the animal is performed.

Nail prick or quicking occurs in a horse if the sensitive hoof structures are penetrated by a horseshoe nail being driven through the hoof wall while shoeing. The nail creates a wound on the inside of the hoof wall. 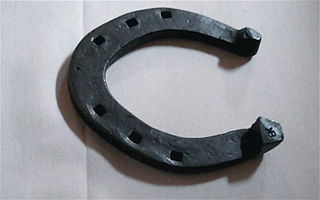 A caulkin from the Latin calx is a blunt projection on a horseshoe or oxshoe that is often forged, welded or brazed onto the shoe. The term may also refer to traction devices screwed into the bottom of a horseshoe, also commonly called shoe studs or screw-in calks. These are usually a blunt spiked cleat, usually placed at the sides of the shoe. 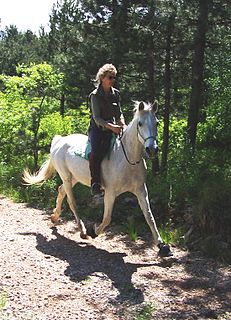 Natural hoof care is the practice of keeping horses so that their hooves are worn down naturally and so do not suffer overgrowth, splitting and other disorders. Horseshoes are not used, but domesticated horses may still require trimming, exercise and other measures to maintain a natural shape and degree of wear. 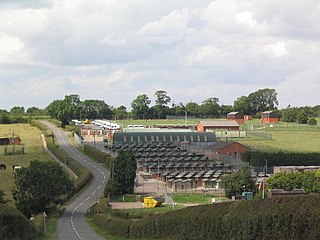 The Defence Animal Training Regiment (DATR) is a training establishment, based in Melton Mowbray, east Leicestershire. It trains animals, of which the most numerous are dogs, for all three armed forces. Its headquarters are also the principal base of the Royal Army Veterinary Corps.

Bracy Clark was an English veterinary surgeon specialising in the horse. 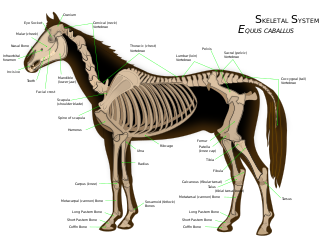 The limbs of the horse are structures made of dozens of bones, joints, muscles, tendons, and ligaments that support the weight of the equine body. They include two apparatuses: the suspensory apparatus, which carries much of the weight, prevents overextension of the joint and absorbs shock, and the stay apparatus, which locks major joints in the limbs, allowing horses to remain standing while relaxed or asleep. The limbs play a major part in the movement of the horse, with the legs performing the functions of absorbing impact, bearing weight, and providing thrust. In general, the majority of the weight is borne by the front legs, while the rear legs provide propulsion. The hooves are also important structures, providing support, traction and shock absorption, and containing structures that provide blood flow through the lower leg. As the horse developed as a cursorial animal, with a primary defense mechanism of running over hard ground, its legs evolved to the long, sturdy, light-weight, one-toed form seen today. 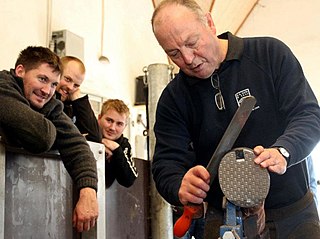 Simon John Curtis is a farrier, author, lecturer and horse hoof-care expert with a PhD in Equine Physiology and Biomechanics (2017). He is a 4th generation farrier; his family have been farriers and blacksmiths in the Newmarket area for at least 150 years. In over 45 years working as a farrier, he has lectured and demonstrated in more than 30 countries including the USA, Australia, India, Russia, and Brazil.