Flying Fish Records was a record label founded in Chicago in 1974 that specialized in folk, blues, and country music. In the 1990s the label was sold to Rounder Records.

Bruce Kaplan, the label's founder, was a native of Chicago and the son of a president of Zenith Electronics. He studied anthropology at the University of Chicago and became president of the school's folklore society. He began Flying Fish in 1974 to concentrate on traditional and contemporary folk music, though the catalog grew to include blues, bluegrass, country, jazz, reggae, dancefloor and rock. [1]

When Kaplan started the label, most similarly oriented companies produced albums with decidedly "homemade" packaging (e.g. cover art, etc.) and marketed the albums to a relatively narrow audience of aficionados. Kaplan realized that music of this sort had the potential to reach a wider audience, but needed to be packaged in a professional manner; people not already devotees were unlikely to take a chance on something that did not look like it came from a "real" record company. Kaplan also invested in broader promotion of the music (wide provision of albums to radio; targeted advertising to back up tours). Essentially, he located a niche between the hit-based promotion model of the major labels and the faith of the small independents that the music would find its own audience.[ citation needed ] Flying Fish recording artists were able to find that audience at the local Evanston, Illinois, venue Amazingrace Coffeehouse, which presented numerous artists off the roster, including Vassar Clements, John Hartford, New Grass Revival, Norman Blake, and Claudia Schmidt. [2]

Starting with the Hillbilly Jazz double album featuring fiddler Vassar Clements, and following up with a Grammy Award winning album by John Hartford, Flying Fish Records's success with this niche approach led to similar changes by many other roots labels of the period.[ citation needed ]

In December 1992, Kaplan developed an ear infection that did not respond to antibiotic treatment and he died unexpectedly. After a brief period under the direction of longtime employee Jim Netter, supported by Kaplan's widow Sandra Shifrin (a social worker), the label was sold to Rounder Records, where Kaplan had worked as a producer for a brief period before founding Flying Fish. The label bought Hogeye Music in the mid-1980s. Flying Fish distributed Blind Pig Records and Rooster Blues.

John Cowan Hartford was an American folk, country, and bluegrass composer and musician known for his mastery of the fiddle and banjo, as well as for his witty lyrics, unique vocal style, and extensive knowledge of Mississippi River lore. His most successful song is "Gentle on My Mind", which won three Grammy Awards and was listed in "BMI's Top 100 Songs of the Century". Hartford performed with a variety of ensembles throughout his career, and is perhaps best known for his solo performances where he would interchange the guitar, banjo, and fiddle from song to song. He also invented his own shuffle tap dance move, and clogged on an amplified piece of plywood while he played and sang. 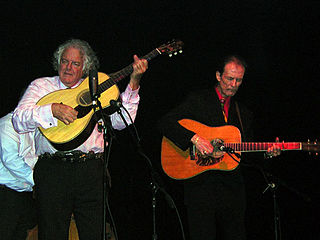 Vassar Carlton Clements was an American Grammy Award-winning American jazz, swing, and bluegrass fiddler. Clements has been dubbed the Father of Hillbilly Jazz, an improvisational style that blends and borrows from swing, hot jazz, and bluegrass along with roots also in country and other musical traditions. 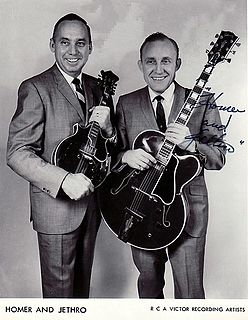 Kenneth Charles "Jethro" Burns was an American mandolinist and one-half of the comedy duo Homer and Jethro with Henry D. "Homer" Haynes. 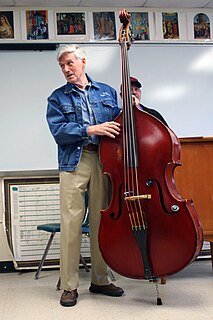 Tom Gray is a bluegrass musician widely considered one of the best bass players in the genre. He is probably best known for his bass playing with The Country Gentlemen and The Seldom Scene. In 1996, as a member of The Country Gentlemen, he was inducted into the International Bluegrass Music Hall of Honor.

Claudia Schmidt is an American musician, originally from New Baltimore, Michigan, United States, who has recorded folk, jazz, blues, and spoken word albums. She plays guitar and Appalachian dulcimer and sings. She has appeared numerous times on the radio program, A Prairie Home Companion. She has recorded with Paul Cebar and Peter Ostroushko as well as Steve Tibbetts. She also appeared in a documentary film, Gap-Toothed Women, by Les Blank.

Aereo-Plain is a 1971 studio album by American bluegrass singer-songwriter and instrumentalist John Hartford. It reached number 193 on The Billboard 200 chart.

Steam Powered Aereo-Takes is a collection of outtakes, demos and jam-sessions from John Hartford's groundbreaking 1971 album Aereo-Plain, released in 2002. The music is a blend of traditional bluegrass musicianship, and the hippie spirit of the '70s. The other members of the Aereo-Plain Band were Norman Blake, Vassar Clements, Tut Taylor, and Randy Scruggs.

Then and Now is a 1973 studio album by American country music artists, and father-and-son team, Doc Watson and Merle Watson. The album won the Grammy Award for Best Ethnic or Traditional Folk Recording in 1974. 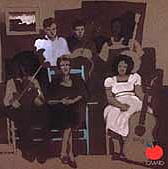 The Elementary Doctor Watson! is a studio album by the American country music artists Doc Watson and Merle Watson, released in 1972.

Gum Tree Canoe is an album by the American musician John Hartford, released in 1984. It was reissued on CD in 2001 with two additional tracks. 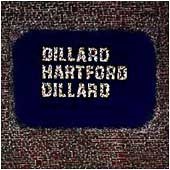 Glitter Grass from the Nashwood Hollyville Strings is an album by John Hartford, Doug Dillard, and Rodney Dillard, released in 1977. 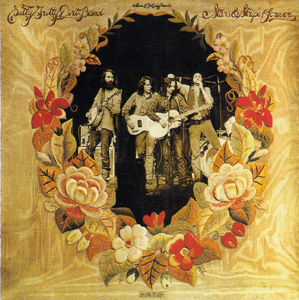 Stars & Stripes Forever is the eighth album from The Nitty Gritty Dirt Band.

Amazingrace Coffeehouse was an influential counterculture music and performance venue in Evanston, Illinois, during the 1970s. Run by a collective called the Amazingrace Family, it was known for its welcoming atmosphere, eclectic menu, excellent sound system, and respectful audiences. Amazingrace was the top music club in the Chicago Reader poll 1973-1975, plus Number 3 in the 1975 wrap-up of "Who's Who in Chicago's Alternative Culture". Performers from a wide variety of genres played at Amazingrace from its beginning on the campus of Northwestern University until its final incarnation at The Main on Chicago Avenue in Evanston.