The Fordham University Church was originally built in 1845 as a seminary chapel and parish church for the surrounding community of Old Fordham Village in The Bronx. [1] In 1859, the university was purchased by the Jesuits, and the church was absorbed by the university (then St. John's College). [2]

It contains the altar from the Old St. Patrick's Cathedral, as well as stained glass windows given to the university by King Louis Philippe I of France. [1] The windows are particularly notable for their connection to a workshop in Sevres, France, where the earliest stages of the Gothic Revival took place. [1] The six windows in the nave of the University Church depict the Four Evangelists, St. Peter, and St. Paul. [3]

Adjacent to the church is the Fordham University Cemetery, where the university's original nineteenth-century Jesuits, diocesan seminarians, students, and workers are interred; [4] the original cemetery had been located on property that now belongs to the New York Botanical Garden, and the graves were relocated to their current location in 1890. [5]

The University Church is the central place of worship for Fordham's campus ministry; however, there are numerous chapels associated with the church on the Rose Hill campus, including the Blue Chapel in Keating Hall, [6] the Sacred Heart Chapel in Dealy Hall, and the St. Robert Bellarmine Chapel at Spillman Hall. [7] Additionally, the Our Lady's Chapel is located in the University Church basement. [8] 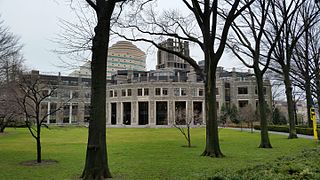 Fordham Road is a major thoroughfare in the Bronx, New York City, that runs west-east from the Harlem River to Bronx Park. Fordham Road houses the borough's largest and most diverse shopping district. It geographically separates the North Bronx from the South Bronx.

St. Francis Xavier Church is a Roman Catholic church in Manhattan at 30–36 West 16th Street between Fifth Avenue and the Avenue of the Americas in the Flatiron District neighborhood of Manhattan, New York City. 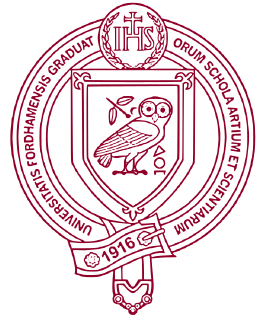 The former Chapel of Free Grace was a former mission chapel built in 1859 by St. George's Episcopal Church. Located at 406 East 19th Street in Manhattan, New York City, it was a gable-fronted steeply pitched masonry Gothic Revival church with a gable rose window. The Evangelical Lutheran Church of Christ purchased the church building in 1882. The 19th Street building remained the Lutheran congregation's home until it was demolished in 1948 during the development of Stuyvesant Town by Metropolitan Life Insurance.

The Church of St. Augustine was a Roman Catholic parish church under the authority of the Roman Catholic Archdiocese of New York. It was located at 1183 Franklin Avenue between East 167th Street and East 168th Street in the Morrisania neighborhood of the Bronx, New York City. The church was closed in 2011 and demolished in 2013.

The Church of St. John is a parish church under the authority of the Roman Catholic Archdiocese of New York, located at 3021 Kingsbridge Avenue, Bronx, New York City. The parish was established in 1877 and has had long ties with the Religious of Jesus and Mary as their main base in New York.

St. Margaret of Cortona's Church is a parish church under the authority of the Roman Catholic Archdiocese of New York, located at 6000 Riverdale Avenue, Riverdale-on-Hudson, The Bronx, New York City, New York.

The Church of St. Nicholas of Tolentine is a Roman Catholic parish church under the authority of the Roman Catholic Archdiocese of New York, located at Fordham Road at University Avenue, in the Bronx borough of New York City, in the U.S. state of New York. The substantial stone twin-towered is deemed "The Cathedral of the Bronx." 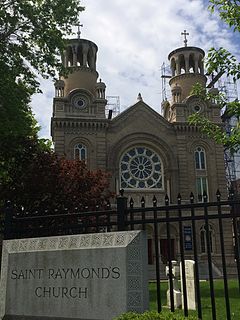 St. Raymond's Church is a parish church under the authority of the Roman Catholic Archdiocese of New York, located at Castle Hill Avenue at Tremont Avenue, The Bronx, New York City. The parish was established in 1842. It was dedicated on the feast of St. Raymond Nonnatus, on August 31, 1845, thus getting its name. There is a stained glass window, on the right side if you are looking at the sanctuary, of St. Raymond Nonnatus and the men who took him hostage. 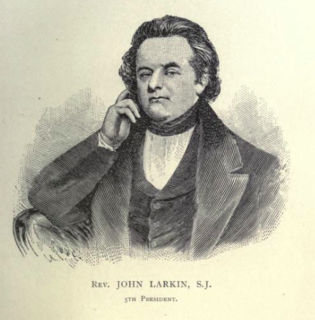 John Larkin (1801–1858) was a Jesuit priest, born in England, who settled in New York City. There he founded the College of St. Francis Xavier and became president of St John's College.

Rémi-Joseph Tellier (1796-1866) was a French Jesuit priest. After postings in France and Italy, in 1842 Tellier emigrated to Canada with several other Jesuits determined to establish the order there. He remained in Canada for ten years before moving to the USA, where he became the first prefect of Studies and Discipline at the College of St. Francis Xavier, New York, then rector of St John’s College, New York. Later in his life, Tellier returned to Canada. He died in Montreal. 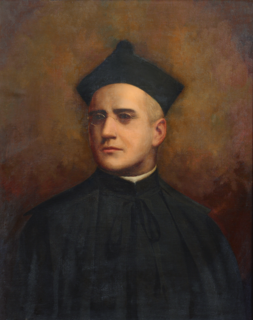 Keating Hall is a building located at Fordham University in the Bronx, New York City. Constructed in 1936, it is considered the "centerpiece" of the university's main Rose Hill campus, and is the home to the university's Graduate School of Arts and Sciences. 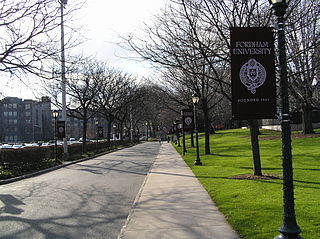 Duane Library is a former library located at Fordham University's Rose Hill campus, originally constructed in 1926. After the construction of the William D. Walsh Family Library in 1997, Duane Library officially closed. Renovated in 2004, it now houses the university's admissions office and theology department.

The Blue Chapel, officially consecrated as the Chapel of Most Holy Mary, Mother of Sorrows is a Roman Catholic memorial chapel located in Keating Hall on the Rose Hill campus of Fordham University in the Bronx, New York City. It originally opened in 1937 upon the completion of Keating Hall. 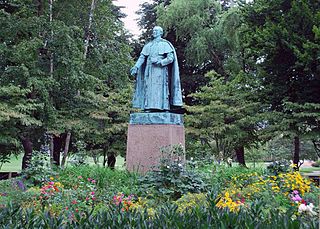