This article is for the valley and rural community near Lillooet, British Columbia, Canada. For the city in California see Fountain Valley, California.

Fountain Valley, [1] officially named Three Lake Valley [2] and also known as the Fountain Lakes Valley, is a valley and rural community located on the east flank of Fountain Ridge, just east of the town of Lillooet, British Columbia, Canada and immediately south of the Indian Reserve community of Fountain. The valley is historically significant as part of the River Trail, which ran up the length of the Fraser River from Yale to Big Bar and beyond, diverging at various points to connect to trails farther east and with the Old Cariboo Road at Fountain, then known as the Upper Fountains and an important junction and staging-ground for freight wagons and travellers bound northwards to the Cariboo goldfields. The trail through the valley, which developed into a wagon road whose roadgrade is largely used by today's road through the valley, climbs a steep grade from its southern end, near Fountainview Farms on the Fraser, and descends relatively gently towards Fountain. The three lakes in the valley, which give it its official name, are Cinquefoil Lake, Kwotlenemo Lake (aka Fountain Lake), and Chilhil Lake, the three of them collectively being known as the Fountain Lakes"" There are many recreational dwellings and small ranches forming a community in the valley, which is something of a rural "suburb" of Lillooet.

Lillooet, formerly Cayoosh Flat, is a community on the Fraser River in British Columbia, Canada, about 240 kilometres (150 mi) up the British Columbia Railway line from Vancouver. Situated at an intersection of deep gorges in the lee of the Coast Mountains, it has a dry climate with an average of 329.5 millimetres (13 in) of precipitation being recorded annually. Lillooet has a long growing season, and once had prolific market gardens and orchard produce. It often vies with Lytton and Osoyoos for the title of "Canada's Hot Spot" on a daily basis in summer. 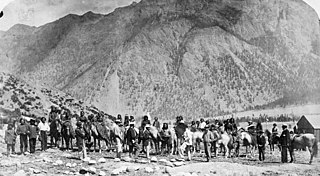 The St'at'imc, also known as the Lillooet, St̓át̓imc, Stl'atl'imx, etc., are an Interior Salish people located in the southern Coast Mountains and Fraser Canyon region of the Interior of the Canadian province of British Columbia.

Lytton in British Columbia, Canada, sits at the confluence of the Thompson River and Fraser River on the east side of the Fraser. The location has been inhabited by the Nlaka'pamux people for over 10,000 years. It is one of the earliest locations settled by non-natives in the Southern Interior of British Columbia. It was founded during the Fraser Canyon Gold Rush of 1858–59, when it was known as "The Forks". The community includes the Village of Lytton and the surrounding community of the Lytton First Nation, whose name for the place is Camchin, also spelled Kumsheen. 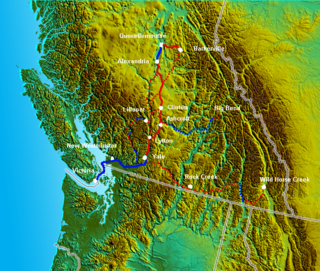 The Cariboo Road was a project initiated in 1860 by the Governor of the Colony of British Columbia, James Douglas. It was a feat of engineering stretching from Fort Yale to Barkerville in the Canadian province of British Columbia through extremely hazardous canyon territory in the Interior of B.C.

The Fraser Canyon is a major landform of the Fraser River where it descends rapidly through narrow rock gorges in the Coast Mountains en route from the Interior Plateau of British Columbia to the Fraser Valley. Colloquially, the term "Fraser Canyon" is often used to include the Thompson Canyon from Lytton to Ashcroft, since they form the same highway route which most people are familiar with, although it is actually reckoned to begin above Williams Lake, British Columbia at Soda Creek Canyon near the town of the same name.

The Cariboo Gold Rush was a gold rush in the Colony of British Columbia, which earlier joined the Canadian province of British Columbia. The first gold discovery was made at Hills Bar in 1858, followed by more strikes in 1859 on the Horsefly River, and on Keithley Creek and Antler Creek in 1860. The actual rush did not begin until 1861, when these discoveries were widely publicized. By 1865, following the strikes along Williams Creek, the rush was in full swing. 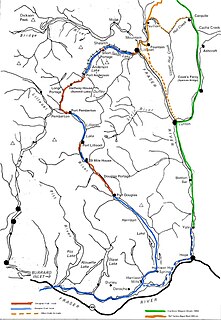 The Douglas Road, a.k.a. the Lillooet Trail, Harrison Trail or Lakes Route, was a goldrush-era transportation route from the British Columbia Coast to the Interior. Over 30,000 men are reckoned to have travelled the route in, although by the end of the 1860s it was virtually abandoned due to the construction of the Cariboo Wagon Road, which bypassed the region.

Port Douglas, sometimes referred to simply as Douglas, is a remote community in British Columbia, Canada at east of the mouth of the Lillooet River, and at the head of Harrison Lake, which is the head of river navigation from the Strait of Georgia. Port Douglas was the second major settlement of any size on the British Columbia mainland during the Fraser Canyon Gold Rush. It came into being in 1858 when Governor Douglas ordered that it be laid out.

The Camelsfoot Range is a sub-range of the Chilcotin Ranges subdivision of the Pacific Ranges of the Coast Mountains in British Columbia. The Fraser River forms its eastern boundary. The range is approximately 90 km at its maximum length and less than 30 km wide at its widest.

The Old Cariboo Road is a reference to the original wagon road to the Cariboo gold fields in what is now the Canadian province of British Columbia. It should not be confused with the Cariboo Road, which was built slightly later and used a different route.

The River Trail was a main route for travel in the colonial era of what is now the Canadian province of British Columbia, running northwards along the Fraser River from to present day Lillooet to Big Bar, British Columbia and points beyond in the Cariboo District. The route was primarily in use during the Fraser Canyon Gold Rush and associated explorations by prospectors northwards in the search for gold in the Cariboo and Omineca Districts.

The Lakes Route is an alternate name for the Douglas Road, which was the first formally designated "road" into the Interior of British Columbia, Canada from its Lower Mainland area flanking the Lower Fraser River. Also known as the Douglas-Lillooet Trail or the Lillooet Trail, the route consisted of a series of wagon roads connected via lake travel in between. A variety of craft were used on the lakes, from steamboats to sail-driven rafts to, through the early 20th Century, diesel and other engines. Lake travel continued for commerce, passenger travel and heavy freight until after World War II.

Fountain is an unincorporated rural area and Indian Reserve community in the Fraser Canyon region of British Columbia, Canada, located at the ten-mile (16 km) mark from the town of Lillooet on BC Highway 99, which in that area is also on the route of the Old Cariboo Road and is located at the junction of that route with the old gold rush-era trail via Fountain Valley and the Fountain Lakes.

Cayoosh Pass is a mountain pass in the Lillooet Ranges of the Pacific Ranges of the southern Coast Mountains in British Columbia, Canada. It lies just west of Duffey Lake on BC Highway 99 between the towns of Lillooet and Pemberton, formed by the headwaters of Cayoosh Creek to the east, flowing to the Fraser River at Lillooet, and Joffre Creek to the west, flowing steeply downhill to Lillooet Lake just southeast of the Mount Currie Indian Reserve.

Pemberton Pass, 505 m (1,657 ft), also formerly known as Mosquito Pass, is the lowest point on the divide between the Lillooet and Fraser River drainages, located at Birken, British Columbia, Canada, in the principal valley connecting and between Pemberton and Lillooet. The pass is a steep-sided but flat-bottomed valley adjacent to Mount Birkenhead and forming a divide between Poole Creek, a tributary of the Birkenhead River, which joins the Lillooet at Lillooet Lake, and the Gates River which flows northeast from Gates Lake, at the summit of the pass, which flows to the Fraser via Anderson and Seton Lakes and the Seton River.

The Bridge River Rapids, also known as the Six Mile Rapids, the Lower Fountain, the Bridge River Fishing Grounds, and in the St'at'imcets language as Sat' or Setl, is a set of rapids on the Fraser River, located in the central Fraser Canyon at the mouth of the Bridge River six miles north of the confluence of Cayoosh Creek with the Fraser and on the northern outskirts of the District of Lillooet, British Columbia, Canada.