Saint Michel was a 64-gun ship of the line of the French Navy, lead ship of her class.

Built for the Crown, Saint Michel was originally manned by officers of the French East India Company. During the War of the Austrian Succession, Saint Michel was part of a squadron under Admiral de Rochambeau; on 17 August 1744, she captured the 20-gun HMS Solebay near Gibraltar. [2] In 1747, her command was transferred to Navy officers. [2]

In 1761, she was recommissioned in Rochefort under Captain de Lizardais to serve in the Seven Years' War, to served in the Caribbean theatre, but she never actually departed. [2] She was then refitted as a 60 gun ship in 1762. [1]

During the American Revolutionary War, Saint Michel took part in the Battle of Ushant on 27 July 1778, [1] under Mithon de Genouilly. [3] She and later took part in the capture of HMS Ardent off Plymouth on 17 August 1779. [2]

On 11 December 1781, Bussy-Castelnau departed Cadiz with a squadron comprising Saint-Michel and the 74-gun Illustre, escorting three transports, to make his junction at Tenerife with another squadron under Guichen. the next day, they encountered a British squadron under Kempenfelt. [5] In the subsequent Second Battle of Ushant, most of the French transports were captured by the British, except Marquis de Castries and Neptune-Royal, which reached Sainte-Croix carrying siege artillery and an artillery company. [6]

Bussy sailed on towards the Indian Ocean, arriving to Table Bay in early April. [6] He landed his troops to reinforce the Dutch Cape Colony against a possible British attack, and on 2 May he sailed to Isle de France (Mauritius), where Saint-Michel and Illustre arrived on 31, the transports following a few days later. [7] Informed that Thomas d'Estienne d'Orves had left the island on 7 December 1781 with his squadron to attack Trincomalee, Bussy decided to attach the 40-gun frigate Consolante to his squadron, as well as 800 men from the garrison which he embarked on 9 transports, and go reinforce him. [8]

On 21 August 1782, Ilustre and Saint-Michel arrived at Batacalo, making their junction with the squadron under Suffren. They were escorting 8 transports and preceded by the corvette Fortune, under Lusignan. [9]

Appointed to Suffren's squadron in the Indian Ocean, she took part in the battles of Trincomalee. [10] After D'Aymar was promoted to Annibal, Suffren appointed Lieutenant Beaumont le Maître to replace him. Saint Michel took part in the Cuddalore, [11] [12] before she returned to France in 1784. [2]

Saint Michel carried out another mission to the Indian Ocean in 1787 before returning to France to be hulked the next year. [2] 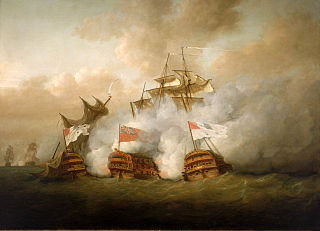 Artésien ('Artesian') was a 64-gun ship of the line of the French Navy, lead ship of her class. She was funded by a don des vaisseaux donation from the Estates of Artois.

The Illustre was a 74-gun Magnanime class ship of the line of the French Navy. She took part in the War of American Independence and in the French Revolutionary Wars. Damaged beyond repairs during the Expédition d'Irlande, she was scuttled on 30 December 1796. 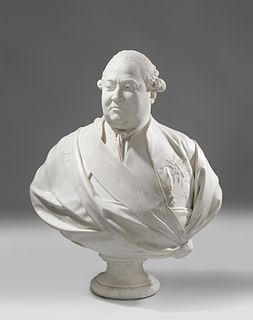 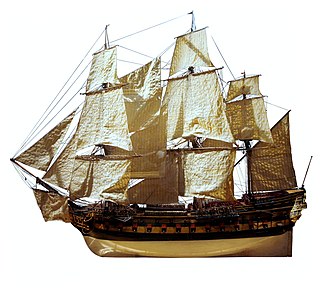 Consolante was a 40-gun frigate of the French Navy, second ship of her class. She is notable as one of the earliest attempts at building a frigate armed with 24-pounders on the artillery deck, rather than the 18-pounders typical of the day.

Armand de Saint-Félix was a French Navy officer and admiral. 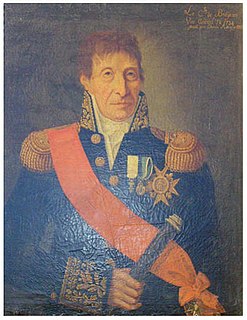 Paul-Jacques de Bruyères-Chalabre was a French Navy officer. He notably captained the 74-gun Illustre at the Battle of Trincomalee from 25 August to 3 September 1782 and at the Battle of Cuddalore on 20 June 1783.

Beaumont le Maître was a French Navy officer. He fought in the Indian Ocean under Suffren during the War of American Independence, notably captaining the 64-gun Ajax at the Battle of Trincomalee from 25 August to 3 September 1782 and Saint Michel at the Battle of Cuddalore on 20 June 1783.

Louis-Esprit d'Aymar was a French Navy officer. He fought in the Indian Ocean under Suffren during the War of American Independence, captaining the 64-gun Saint Michel at the Battle of Trincomalee from 25 August to 3 September 1782, and the 74-gun Annibal at the Battle of Cuddalore on 20 June 1783.

Péan de la Villehunault was a French Navy officer. He fought in the War of American Independence, and taking part in the French operations in the Indian Ocean under Suffren.

Du Pas de la Mancelière was a French Navy officer. He notably captained the 64-gun Ajax in Suffren's squadron during the Anglo-French War, and was killed in action at the Battle of Cuddalore.

Chevalier de La Règle was a French Navy officer. He notably served in Suffren's squadron during the Anglo-French War.

Lézard was a 16-gun Cerf-class cutter of the French Navy. She was built in 1781, and took part in the Indian theatre of the Anglo-French War. She was captured by the 74-gun HMS Sultan in October 1782 at Trinquebar, and later returned to France.