Gerardo Compos Sandoval (born 1962) is a judge of the Superior Court of California in and for the County of San Francisco. He was formerly a member of the San Francisco Board of Supervisors. A practicing attorney, he defeated Superior Court judge Thomas J. Mellon, Jr. in a runoff election held in November 2008 after coming in first, but not obtaining a majority of votes cast in the June 2008 primary election. Sandoval, a Democrat, represented the 11th district of San Francisco, which encompasses the Excelsior neighborhood. In 2005, he ran for San Francisco County assessor, but lost to appointed incumbent Phil Ting. Sandoval was first elected to the Board of Supervisors in December 2000, and was re-elected in November 2004. In March 2000 he was elected to the San Francisco Democratic Central Committee.

Sandoval's mother was a garment worker and homemaker. His father was a gardener and union organizer. Except for his oldest brother, who is developmentally disabled, all of Gerardo's siblings graduated from college.[ citation needed ]

He was in the first Head Start class in 1966 and considers himself a product of Lyndon Johnson's "Great Society". He is fully bilingual in Spanish and has traveled extensively in Latin America, Asia and Europe. Sandoval is married to the former Amy Harrington, and they have two daughters.[ citation needed ]

Sandoval attended Loyola High School in Los Angeles before graduating from the University of California, Berkeley in 1987. In 1989 he received his Master's degree in City and Regional Planning from UC Berkeley, with a specialization in real estate and housing development. He wrote his master's thesis on using tax credits to build affordable housing. Sandoval received his law degree from Columbia University Law School. Sandoval is the first in his family to receive an advanced degree.[ citation needed ]

Sandoval worked as an assistant to San Francisco Mayor Art Agnos from 1990 to 1992, where he was responsible for budget and finance issues. He worked as a trial attorney and Deputy Public Defender in the San Francisco Public Defender's Office for five years. He was formerly an associate at Skadden, Arps, Slate, Meagher & Flom LLP, the largest law firm in the United States. Sandoval also completed a three-year term on San Francisco's Public Transportation Commission, an agency with over $350 million in expenditures and 3500 employees.[ citation needed ]

As Supervisor, Sandoval passed a consular identification ordinance in San Francisco. The ordinance requires that City employees (including police officers, airport workers, and health care workers) accept as identification the ID cards issued by foreign consulates if the cards have sufficient safeguards against fraudulent duplication and are accepted by the foreign government for entry into their national territory. This landmark legislation has been duplicated in many major US cities including Los Angeles, New York and Chicago. Most major US banks also accept the identification cards. The cards are used by individuals traveling temporarily in the US such as Mexican truck drivers who are allowed under the North American Free Trade Agreement (NAFTA) to enter the US. The cards also allow individuals to open bank accounts and otherwise access commonly available financial services. The ordinance has been criticized by opponents as allowing undocumented workers to more easily live in the US. Supporters of the ordinance have argued that such legislation by local governments is necessary to fill the vacuum in policy left due to inaction from federal and state governments. [1]

Shortly after his election, Sandoval made statements that were criticized as anti-Semitic, and Sandoval apologized at a press conference, saying "It was an unfortunate example and I apologize for it... I want to thank everyone for bringing this to my attention. As a Latino, a Mexican-American, I am sensitive to discrimination." [2] The criticized statements were made when Sandoval spoke out against an $80 million legal settlement that the City of San Francisco was paying to its biggest corporations. At a community meeting, Sandoval stated that the issue was not a legal one but a political one. Sandoval articulated an argument that San Franciscans should leave no stone unturned in trying to fight back, stating people should protest at "corporate headquarters, at the homes of CEOs, and their birthdays, weddings, bar mitzvahs or wherever" as the lawsuit would take money away from underserved segments of the population.

In an interview on Hannity & Colmes, San Francisco Supervisor Sandoval said that "I don't think we should have a military." [3] He then claimed that local police and firefighters should be responsible for national defense. Sandoval also stated in the same interview, "we should invest our money in our kids." This video can be found on YouTube. [4] [5]

In a February 20 op-ed for the San Francisco Chronicle , he defended his remarks by stating that his own views are in line with a municipal resident current which runs against further military involvement in city life. [6]

Response to criticism of immigrants

Sandoval introduced a resolution "condemning the defamatory language used by talk radio host Michael Savage" after Savage criticized undocumented immigrant protesters who were fasting in support of the controversial DREAM Act, which would give qualifying undocumented immigrants a path to US citizenship as well as enable them to receive tax payer funded in-state college tuition. [7] [8] [9] While the original 9-1 vote on August 14, 2007 failed to receive the required unanimous vote, the Board’s second attempt on October 2, 2007 passed after the one dissenting supervisor had been suspended from the Board by the Mayor. [10] 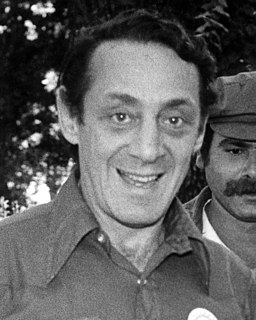 Harvey Bernard Milk was an American politician and the first openly gay elected official in the history of California, where he was elected to the San Francisco Board of Supervisors. Although he was the most pro-LGBT politician in the United States at the time, politics and activism were not his early interests; he was neither open about his sexuality nor civically active until he was 40, after his experiences in the counterculture movement of the 1960s. 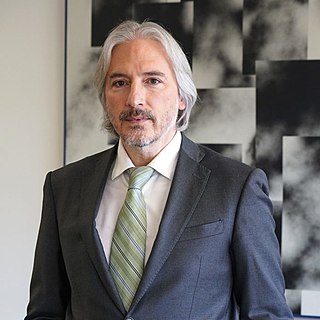 Matthew Edward Gonzalez is an American politician, lawyer, and activist. He served on the San Francisco Board of Supervisors from 2001 and 2005 and was president of the Board. In 2003, Gonzalez, running as a member of the Green Party, lost a close race for mayor of San Francisco to Democrat Gavin Newsom. In the 2008 presidential election, Gonzalez ran for vice president as the running mate of candidate Ralph Nader. As of 2020, he works as the Chief Attorney at the San Francisco Public Defender's Office.

Christopher Edward Daly is a former member of the San Francisco Board of Supervisors. He represented District 6, serving from 2001 to 2011. He now lives in Fairfield, California, but commutes to Las Vegas, Nevada, where he works for the Nevada State Education Association. 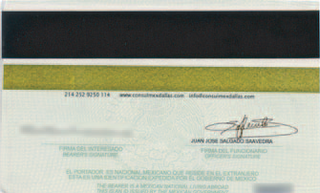 The Matrícula Consular de Alta Seguridad (MCAS) is an identification card issued by the Government of Mexico through its consulate offices to Mexican nationals residing outside of Mexico. Also known as the Mexican CID card, it has been issued since 1871. The issue of the card has no bearing on immigration status in the foreign country they are residing in. The purpose of the card is to demonstrate that the bearer is a Mexican national living outside of Mexico. It includes a Government of Mexico issued ID number and bears a photograph and address outside of Mexico of the Mexican National to whom it is issued. 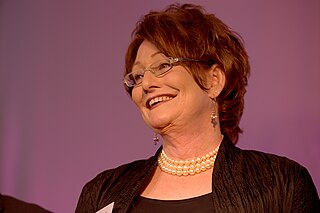 The San Francisco Board of Education is the school board for the city and County of San Francisco. It is composed of seven Commissioners, elected by voters across the city to serve 4-year terms. It is subject to local, state, and federal laws, and determines policy for all the public schools K-12 in the San Francisco Unified School District.

David Campos, is an attorney and former member of the San Francisco Board of Supervisors representing San Francisco's District 9 from 2008 to 2016 when he termed out. His reelection in 2012 made him one of only two LGBT San Francisco supervisors. In 2014, Campos ran for the California State Assembly seat in the 17th District, but lost to David Chiu. On March 13, 2017, Campos was appointed as a Deputy County Executive for Santa Clara County.

The Elm City Resident Card is an identification (ID) card used in New Haven, Connecticut in the United States. The card was originally designed to protect the estimated 10,000 to 15,000 undocumented immigrants in New Haven from being robbed or assaulted. All city residents can receive the card, which serves as a form of identification, debit card with a capacity of $150, library card, and a way to pay for parking meters. The cards were first issued in July 2007, and were the first municipal identification cards issued in the United States. The card costs $5 for children or $10 for adults.

The 2004 San Francisco Board of Supervisors elections occurred on November 2, 2004. Seven of the eleven seats were contested in this election. Six incumbents and one open seat were up for election. 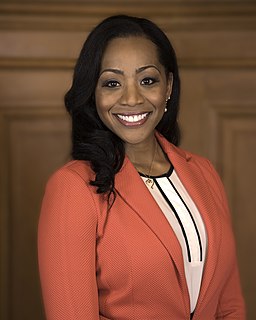 Malia Cohen is an American politician serving as a member of the California State Board of Equalization from the 2nd district, which covers 23 counties in California and a population of approximately 9.5 million people. Cohen previously served as President of the San Francisco Board of Supervisors, representing District 10.

The SF City ID Card is a municipal identification card program operated by San Francisco, California for residents of the city-county, regardless of their immigration status. The cards also do not specify the person's gender, to assist transgender individuals who often have difficulty with identification documents.

Tullio Antonio Rottanzi (1867–1911) was an American physician who served on the San Francisco Board of Supervisors in the late 19th century and was noted for introducing a law that banned the wearing of tall hats in theaters. As a short-term acting mayor he sought out ways of cutting indolence and waste in city government, and during a city crisis in which two boards of supervisors claimed to hold power, he was the only person serving on both bodies.

Aaron Dan Peskin is an American elected official in San Francisco, California. He serves as a member of the San Francisco Board of Supervisors representing Supervisorial District 3, and is currently Dean of the Board. He was elected in 2015, having previously served two terms in 2001–2009. 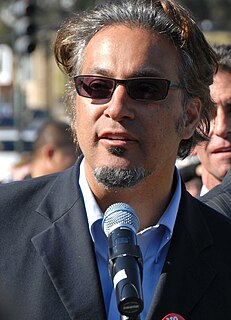 Rostam Mirkarimi is an American politician and the former Sheriff of San Francisco. Prior to being sheriff, he served on the San Francisco Board of Supervisors, where he represented District 5.