Graeme was educated at Stowe School in Buckinghamshire,which is also where former Northamptonshire teammates Rob White,Ben Howgego and Mark Nelson studied. Earlier on in his career,he scored 109 and took 7 for 21 for Staffordshire U17s during 2003. Graeme then progressed on to playing second XI cricket for Northamptonshire at the end of the 2004 season and throughout the 2005 season. He played for England in the 2006 U-19 Cricket World Cup in Sri Lanka.

In 2009 Graeme moved to Nottinghamshire citing the need for regular first team cricket as the main motivation. [1] He made little impact at Notts and briefly returned to Northants on loan in June 2013,and later that year signed a longer term contract with the club. [2]

Graeme's highest first-class innings came on 10 August 2007,when he scored 65,sharing in a 145-run partnership with David Sales. His best first-class bowling figures are 6/44,playing for Northants against Glamorgan at Northampton in September 2016. [3]

Northamptonshire County Cricket Club in 2005 are playing their cricket in Division Two of the County Championship and Division One of the totesport League. They started the season at 12–1 to win the Division Two title. During the off season 9 players left.

Malachy Bernard "Mal" Loye,is an English former cricketer who played first-class cricket for Northamptonshire,Lancashire,and England A. Loye is a right-handed batsman,particularly well known for his slog sweep shot against fast bowlers. Deep into a long career,he also finally made his One Day International debut against Australia on 19 January 2007 aged 34 years 113 days.

Mattheus Hendrik"Riki" Wessels is an Australian-English cricketer who most recently played for Worcestershire County Cricket Club. A right-handed batsman and wicket-keeper,Wessels has played for Marylebone Cricket Club,Northamptonshire and Nottinghamshire,and also for the Mid West Rhinos in Zimbabwe and the Sydney Sixers in Australia. He is the son of former South African captain Kepler Wessels,who also played 24 Test matches for Australia.

Richard Ernst Levi is an English-South African cricketer. He played in the 2006 U-19 Cricket World Cup in Sri Lanka. He currently plays for Western Province,Cape Cobras and Northamptonshire. He attended Wynberg Boys' High school in Cape Town and received honours for cricket in 2005.

Steven Paul Crook is a former Australian cricketer who played for Northamptonshire in English county cricket. He is an all-rounder,batting right-handed and bowling right-arm fast medium pace. In September 2018,he announced his retirement from all forms of cricket. Sir Alastair Cook described Steven as the worst bowler he had faced during the recent Tailenders Live show at the Palace Theatre Manchester #Tailendersoftheworlduniteandtakeover 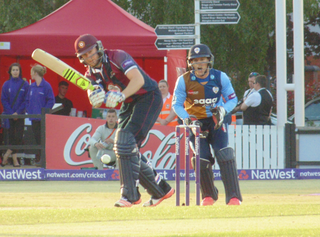 Alex George Wakely is an English former cricketer who played for Northamptonshire and was also a former captain of the England under-19s. He is a right-hand batsman,bowls off-breaks and sometimes medium pace bowling. In May 2021,Wakely announced his retirement from all forms of cricket.

David Murphy is a former English cricketer. who played for Northamptonshire and Scotland and is primarily a wicket-keeper. 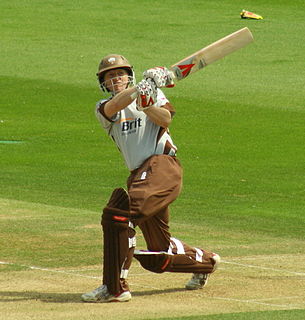 Alistair Duncan Brown,commonly known as Ali Brown,is a former English cricketer who played for Surrey County Cricket Club,before moving to Nottinghamshire for the 2009 season. He was nicknamed "Lordy",in allusion to Ted Dexter because of his aggressively big-hitting,confident batting style. He was a right-hand bat and occasional right-arm off-break bowler,who made 16 One Day International appearances for England between 1996 and 2001,with a best of 118.

Robert Irving Newton is an English cricketer who played for Northamptonshire County Cricket Club. He is an aggressive right-handed top order batsman. Newton enjoyed a prolific cricket record while at school and was tipped by The Wisden Cricketer as 'one to watch'. He made his Northamptonshire first-team debut in 2009.

Brett Alan Hutton is an English cricketer. Hutton is a right-handed batsman who bowls right-arm medium pace. He was born at Doncaster,Yorkshire and attended Worksop College in north Nottinghamshire where he was the recipient of a cricket scholarship.

Robert Ian Keogh is an English cricketer who currently plays for Northamptonshire. Keogh is a right-handed batsman who bowls right-arm off break. 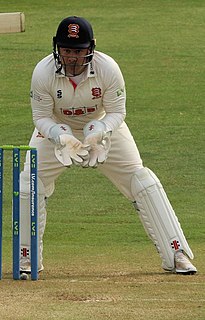 Adam Matthew Rossington is an English professional cricketer who plays for Northamptonshire County Cricket Club. Rossington is a right-handed batsman who fields as a wicket-keeper. He was born in Edgware,Middlesex,and was educated at Mill Hill School.

Ben Matthew Duckett is an English cricketer who plays for Nottinghamshire. He is a left-handed batsman who can play as a wicket-keeper. He made his international debut for England in October 2016. Duckett has signed for the Brisbane Heat.

The 2021 County Championship was the 121st cricket County Championship season in England and Wales. For the first phase of the tournament,the teams were split into three groups of six,with each side playing ten matches. The top two teams from each group progressed into Division One for the second phase of the competition,with the other teams progressing to Divisions Two and Three. The team that finished top of Division One became the county champions;and the top two teams from Division One contested a five-day match at Lord's for the Bob Willis Trophy. On 17 December 2020,the England and Wales Cricket Board (ECB) confirmed all the fixtures for the tournament. After completion of the group stage on 14 July 2021,the ECB confirmed the fixtures for the division stage on 22 July 2021.

The 2021 Royal London One-Day Cup tournament was a limited overs cricket competition that formed part of the 2021 English cricket season in England and Wales. Matches were contested over 50 overs per side,having List A cricket status,with all eighteen first-class counties competing in the tournament. The tournament started on 22 July 2021,with the final taking place on 19 August 2021 at Trent Bridge in Nottingham. Somerset were the defending champions winning the 2019 tournament,with no tournament taking place in 2020 due to the COVID-19 pandemic.

The 2022 Royal London One-Day Cup tournament was a limited overs cricket competition that formed part of the 2022 domestic cricket season in England and Wales. Matches were contested over 50 overs per side,having List A cricket status,with all eighteen first-class counties competing in the tournament. The tournament began on 2 August 2022,with the final taking place on 17 September 2022 at Trent Bridge in Nottingham. Glamorgan were the defending champions,having won the 2021 tournament. Kent won the tournament,beating Lancashire by 21 runs in the final.