Granite domes are domical hills composed of granite with bare rock exposed over most of the surface. Generally, domical features such as these are known as bornhardts. Bornhardts can form in any type of plutonic rock but are typically composed of granite and granitic gneiss. [1] As granitic plutons cool kilometers below the Earth's surface, minerals in the rock crystallize under uniform confining pressure. Erosion brings the rock closer to Earth's surface and the pressure from above the rock decreases; as a result the rock fractures. These fractures are known as exfoliation joints, or sheet fractures, and form in onionlike patterns that are parallel to the land surface. These sheets of rock peel off the exposed surface and in certain conditions develop domical structures. [2] Additional theories on the origin of granite domes involve scarp-retreat and tectonic uplift.

Sheet fractures are arcuate fractures defining slabs of rock that range from 0.5 to 10 meters thick. They normally form in sets parallel to the Earth's surface but may form in convex-upward or concave-upward sets. There are several possible explanations for the formation of sheet fractures. The most popular hypothesis is that they are the result of expansion and tangential fracturing consequent on erosional offloading or pressure release. There is evidence that supports this hypothesis when looking at granitic landforms that have sheet fractures. Granite forms deep in the Earth's crust under conditions of high ambient or lithostatic pressure. In order for the granite to be exposed at the Earth's surface a considerable thickness of rock must be eroded. This unloading allows the granite to expand radially and sheet fractures form tangentially to the radial stress. This indicates that the shape of the pre-existing land surface determines the geometry of the sheet fractures. [3]

Other theories of origin

One hypothesis is that granite domes are uplifted blocks. This is the case with some granite domes but the fracture related exfoliation joints are what controls the steep slopes. Another theory that regards isolated bornhardts is that they remain after long-distance scarp recession. Moisture related weathering is what causes scarp recession. In the case of granite in a dissected landscape the dry granite high on a slope remains stable and acts as caprock. Granite below this is more easily weathered and eroded because it has been exposed to moisture and has weathered. This ultimately leads to the steepening of the slope and the collapse of higher slope elements as well as the maintenance of scarps of essentially constant inclination and morphology during backwearing. [4]

A tor, which is also known by geomorphologists as either a castle koppie or kopje, is a large, free-standing rock outcrop that rises abruptly from the surrounding smooth and gentle slopes of a rounded hill summit or ridge crest. In the South West of England, the term is commonly also used for the hills themselves – particularly the high points of Dartmoor in Devon and Bodmin Moor in Cornwall. 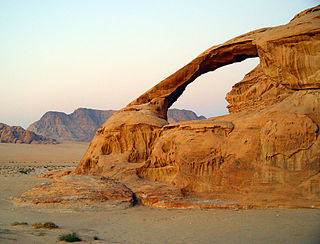 Weathering is the breaking down of rocks, soils, and minerals as well as wood and artificial materials through contact with the Earth's atmosphere, water, and biological organisms. Weathering occurs in situ, that is, in the same place, with little or no movement, and thus should not be confused with erosion, which involves the transport of rocks and minerals by agents such as water, ice, snow, wind, waves and gravity and then being transported and deposited in other locations. 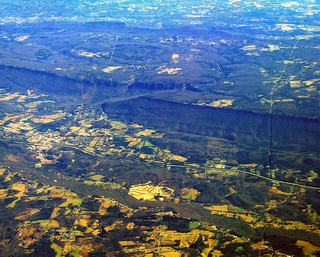 An escarpment is a steep slope or long cliff that forms as a result of faulting or erosion and separates two relatively level areas having different elevations. Usually scarp and scarp face are used interchangeably with escarpment.

An inselberg or monadnock is an isolated rock hill, knob, ridge, or small mountain that rises abruptly from a gently sloping or virtually level surrounding plain. In Southern Africa a similar formation of granite is known as a koppie, an Afrikaans word from the Dutch diminutive word kopje. If the inselberg is dome-shaped and formed from granite or gneiss, it can also be called a bornhardt, though not all bornhardts are inselbergs. 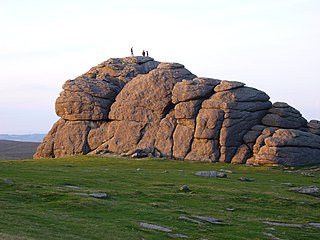 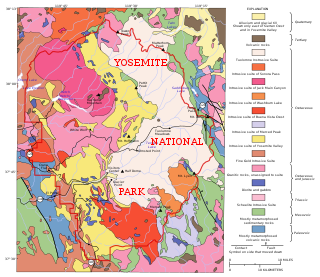 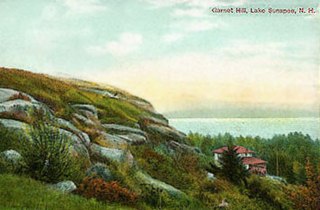 Wave Rock is a natural rock formation that is shaped like a tall breaking ocean wave. The "wave" is about 15 m (49 ft) high and around 110 m (360 ft) long. It forms the north side of a solitary hill, which is known as "Hyden Rock". This hill, which is a granite inselberg, lies about 3 km (2 mi) east of the small town of Hyden and 296 km (184 mi) east-southeast of Perth, Western Australia. Wave Rock and Hyden Rock are part of a 160 ha (395-acre) nature reserve, Hyden Wildlife Park. More than 100,000 tourists visit every year. 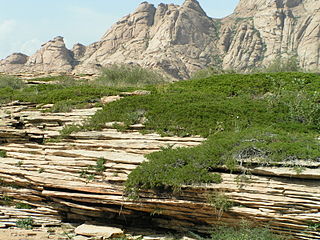 A joint is a break (fracture) of natural origin in the continuity of either a layer or body of rock that lacks any visible or measurable movement parallel to the surface (plane) of the fracture. Although they can occur singly, they most frequently occur as joint sets and systems. A joint set is a family of parallel, evenly spaced joints that can be identified through mapping and analysis of the orientations, spacing, and physical properties. A joint system consists of two or more intersecting joint sets.

A panhole is a shallow depression or basin eroded into flat or gently sloping cohesive rock. Confusingly, some authors refer to panholes also as potholes, which is a term typically used for similarly shaped riverine landforms. Similar terms for this feature are gnamma (Australia), armchair hollows, weathering pans and solution pans.

A bornhardt is a dome-shaped, steep-sided, bald rock outcropping at least 30 metres (100 ft) in height and several hundred metres in width. They are named after Wilhelm Bornhardt (1864–1946), a German geologist and explorer of German East Africa, who first described the feature. 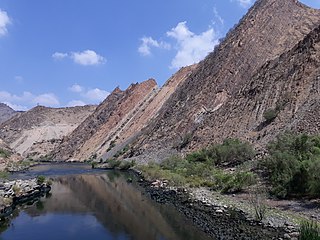 Traditionally in geomorphology, a flatiron is a steeply sloping triangular landform created by the differential erosion of a steeply dipping, erosion-resistant layer of rock overlying softer strata. Flatirons have wide bases that form the base of a steep, triangular facet that narrows upward into a point at its summit. The dissection of a hogback by regularly spaced streams often resulted in the formation of a series of flatirons along the strike of the rock layer that formed the hogback. As noted in some, but not all definitions, a number of flatirons are perched upon the slope of a larger mountain with the rock layer forming the flatiron inclined in the same direction as, but often at a steeper angle than the associated mountain slope. The name flatiron refers their resemblance to an upended, household flatiron. 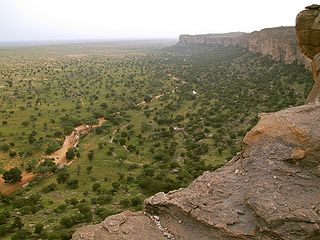 Scarp retreat is a geological process through which the location of an escarpment changes over time. Typically the cliff is undermined, rocks fall and form a talus slope, the talus is chemically or mechanically weathered and then removed through water or wind erosion, and the process of undermining resumes. Scarps may retreat for tens of kilometers in this way over relatively short geological time spans, even in arid locations.

Exfoliating granite is a granite undergoing exfoliation, or onion skin weathering (desquamation). The external delaminated layers of granite are gradually produced by the cyclic variations of temperature at the surface of the rock in a process also called spalling. Frost and ice expansion in the joints during the winter accelerate the alteration process while the most unstable loosen external layers are removed by gravity assisted by runoff water.