The period was difficult with rising operating costs and static to failing income. The early part of the period was soon after infrastructure losses of the Irish Civil War. The Emergency or Second World War at the end of the period saw shortages of coal and raw materials with increased freight traffic and restricted passenger traffic. [2]

Civil unrest in Ireland had led to the assumption of governmental control of all railways operating in Island of Ireland on 22 December 1916 through the Irish Railways Executive Committee, later succeeded by the Ministry of Transport. Control was returned to the management of the companies on 15 August 1921. The Anglo-Irish Treaty of December 1921 establishing the Irish Free State and subsequent Irish Civil War all combined to be damaging to the railways of Ireland widespread and extensive damage to infrastructure and rolling stock. Between 1916 and 1921 revenues had doubled while operating costs and wages had quadrupled. When the GS&WR, by far the largest of the companies, announced it would cease operations on 8 January 1923. The Irish Free state had already recognised the importance of the railway system and had set up the Railway Commission to advise on ownership in April 1922. The impending collapse led to the process that was to create the GSR.{ [3]

Provision for the creation of the company was made by the Railways Act 1924, which mandated the amalgamation (in the case of the four major railway companies) and absorption (of the 22 smaller companies) of all railways wholly within the Irish Free State. Only cross-border railways, most notably the Great Northern Railway (GNR), remained outside its control. [1]

The smaller companies were absorbed under several successive statutory instruments. [4]

CIÉ previously maintained a full online list of the twenty five companies which constituted the Great Southern Railways in 1925. [5] This is not entirely accurate, as it includes the Fishguard & Rosslare Railways & Harbours Company which still exists today, although GSR took over 50% of its shares upon its creation, the other 50% being held by the UK Great Western Railway. The respective shareholdings in the company, now essentially a shelf company, are held today by Iarnród Éireann and Stena Line.[ citation needed ]

Two companies that were not amalgamated but whose tracks the GSR retained operating rights over were the City of Dublin Junction Railway, [lower-alpha 1] and the New Ross and Waterford Extension. [12]

The GS&WR was the dominant constituent in terms of area, route millage and rolling stock. The GSR's headquarters were established at Kingsbridge and Inchicore becoming the chief engineering works. The former Dublin and South Eastern section in particular had become extremely run down and needed extensive remedial work on its rolling stock with about one third condemned with immediate effect.[ citation needed ] Revenue for passengers decreased from £1.91m in 1925 to £1.28m by 1931, that for freight decreasing from £2.27m to £2.05m. [13]

From 1929, when it acquired a stake in the Irish Omnibus Company, the company also ran bus services. These operations became the responsibility, from 1 January 1934, of the Great Southern Railways Omnibus Department.

The group owned a number of hotels, and in 1990 the hotel group was transferred from Córas Iompair Éireann to Aer Rianta, in the ownership of which it remained until 2006. The hotel group formed by the company, Great Southern Hotels, continued to bear that name until its privatisation in 2006. Only the Sligo hotel continued to use the Great Southern name as of 2016, but in January 2018 The Malton Hotel in Killarney reverted to its original name of the Great Southern. [14]

Worldwide economic conditions continued to be difficult and affected Ireland also, passenger and freight revenue decreased to £1.27m and £2.05m by 1939. [15]

Although the Republic of Ireland was a neutral country railway transport was severely disrupted by The Emergency. Lack of high quality coal fuel in Ireland and the need to import from England was severe and desperate alternatives such as turf-burning had only extremely limited success. By 1944 most non-suburban passenger services were restricted to Mondays and Thursdays only with some curtailed altogether. [16]

The Transport Act 1944 dissolved the company and transferred its assets, together with those of the Dublin United Transport Company to Córas Iompair Éireann, from 1 January 1945.

A wide variety of locomotives and rolling stock was inherited from the constituent companies. 1925 records show 526 broad and 41 narrow gauge steam locomotives remaining inherited from the originating companies. [6] Locomotives were renumbered into the GSR class number scheme whereby the lowest numbered engine in the class was used as the class identity. There was a parallel Inchicore scheme that used a letter to indicate the axle layout and a number to designate different groups within the class.

The GSR introduced four Sentinel steam railcars in 1928 with the power unit similar to the GSR Class 280, operating range of over 150 miles (240 km) and a passenger capacity for 55. All were withdrawn in the early 1940s. A subsequent order from Claytons in 1928 were less successful and withdrawn in 1932, a model exists in the Fry railway collection. Four Drewry petrol powered railcars of which two were narrow gauge were also introduced around 1927, with all four also being withdrawn by the mid 1940s. [20] The innovative Drumm Battery Train was successfully operated on the Dublin—Bray route from 1932.

A wide variety of steam locomotives have been used on Ireland's railways. This page lists most if not all those that have been used in the Republic of Ireland and Northern Ireland. Irish railways generally followed British practice in locomotive design. 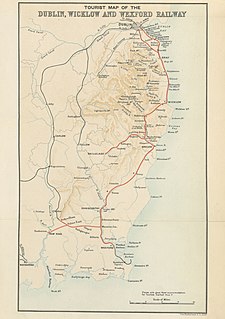 The Dublin and South Eastern Railway (DSER), often referred to as the Slow and Easy, was an Irish gauge railway in Ireland from 1846 to 1925. It carried 4,626,226 passengers in 1911. It was the fourth largest railway operation in Ireland operating a main line from Dublin to Wexford, with branch lines to Shillelagh and Waterford. The company previously traded under the names Waterford, Wexford, Wicklow & Dublin Railway to 1848, Dublin and Wicklow Raillway (D&WR) to 1860 and Dublin, Wicklow and Wexford Railway (DW&WR) until 1906.

The MGWR Classes F, Fa and Fb are a group of similar classes of 0-6-0 steam locomotives of the Midland Great Western Railway of Ireland which were designed and built between 1921 and 1924. The locomotives could be used to handle goods and also for passenger traffic.

Edgar Craven Bredin was an Irish mechanical and locomotive engineer and later a railway manager. Bredin was born in Canterbury on 16 April 1886 and educated at Mountjoy School in Dublin. In 1905 he was apprenticed to Fielding & Platt in Gloucester.

The Great Southern Railways Class 800 steam locomotives were built principally for express passenger work on the Dublin to Cork main line of that company. These locomotives were designed under the supervision of E. C. Bredin with his Chief Draughtsman, H. J. A. Beaumont, preparing the drawings. They were the largest and most powerful engines ever to run in Ireland by quite a large margin, and the only three express passenger locomotives to be built in an independent Ireland.

The Waterford and Tramore Railway (W&TR) was a railway in County Waterford, Ireland, that linked the city of Waterford and the seaside town of Tramore, a distance of 7+1⁄4 miles (11.7 km). The railway officially opened on 5 September 1853 and opened for normal business on 7 September 1853. The line had no intermediate stations, only the two termini, and was to remain completely isolated from the rest of the Irish railway network throughout its life. It closed on 31 December 1960.

The GS&WR 'Class 101, classified as Class 101 or Class J15 by the Great Southern Railways, was a class of 0-6-0 steam locomotives designed for working goods traffic although they did, and were quite capable of, working branch and secondary passenger trains.

The Schull and Skibbereen Railway was a minor narrow gauge railway in County Cork, Ireland. It opened in 1886 and closed in 1947. The track gauge was a 3 ft narrow gauge. The formal name of the company was The West Carberry Tramways and Light Railways Company Ltd.

The Cork and Macroom Direct Railway (CMDR) was an Irish gauge railway in Ireland which ran the 24 miles (39 km) from Cork to Macroom.

The Midland Great Western Railway (MGWR) C Class was a class of 4-4-0 locomotives designed and built at Broadstone by Edward Cusack between 1909 and 1915 using parts obtained from Kitson and Company. They replaced the earlier 7-12 class. The class survived through the Great Southern Railways (GSR) era from 1925-1944 and were withdrawn in the 1950s under Córas Iompair Éireann.

The GS&WR 400 class or CIE class B2/B2a were a class of ten 4-6-0 steam locomotives built for the Great Southern & Western Railway (GS&WR) between 1916 and 1923 for express passenger duties on the Dublin to Cork main line. They proved initially unreliable but rebuilds from four to two cylinders between 1927 and 1937 for the seven survivors produced locomotives yielding satisfactory performance with the last two being withdrawn in 1961. 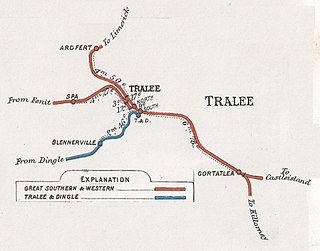 The Great Southern and Western Railway (GS&WR) Class 37 consisted of six 4-4-2T tank engines. The first two built by locomotive superintendent Henry Ivatt (Snr.) were based on a previous 2-4-0T design by McDonnell, as were some 2-4-2Ts Ivatt produced two years earlier for the Kerry branches.