Greig Laidlaw (born 12 October 1985) is a Scottish rugby union player. He plays as a scrum-half and as a fly-half for Shining Arcs. Laidlaw holds the record for most caps as captain, 39, of the Scottish national team. He also represented the British and Irish Lions in 2017.

Although Laidlaw is a scrum half, he is often used as the first-choice goal kicker by his teams. Laidlaw has scored over 700 points for Scotland in his career and is one of the highest points scorers in rugby union history.

His earlier representative rugby included games for Borders under-16 and under-18 as well as Scotland under-18. After stints with the Scotland sevens and under-21 sides, he made his full Scotland debut against New Zealand at Murrayfield in November 2010. In January 2011, he was called up to Scotland's Six Nations squad and, although he did not get any game time, he was retained in Andy Robinson's 40-man squad ahead of the World Cup. He captained Scotland A to wins over the Ireland Wolfhounds and Italy A in early 2011, and then skippered Edinburgh in the Celtic League.

On 4 March 2014 it was announced that Laidlaw would depart Murrayfield at the end of the season and join English Premiership side Gloucester. [2]

After spending three seasons with English Premiership side Gloucester, Laidlaw would depart Kingsholm at the end of 2016–17 season and join French Top 14 side Clermont Auvergne on a three-year deal. [3]

He joined Japanese side Shining Arcs ahead of the 2020–21 Top League season. [4]

He became a regular part of the Scotland team during the 2012 Six Nations, following Dan Parks' sudden retirement after the first round of the tournament. He took on the kicking duties, and in his first start against Wales he scored all of Scotland's 13 points, including a try. [5] He remained at fly-half throughout the rest of 2012 at both international and club level, and captained Edinburgh to a semi-final appearance in that year's Heineken Cup.

The 2013 Six Nations saw Ruaridh Jackson recalled to the national side, so Laidlaw was shifted back to scrum-half while still taking Scotland's kicks. He was second-leading scorer of the season with 61 points, behind Wales' Leigh Halfpenny. [6] He was left out of the 2013 Lions squad, instead heading to the South African Quadrangular Tournament with Scotland. He kicked a last-minute conversion against Italy to salvage something from an underwhelming tournament, giving Scotland a 30–29 victory. He continued to captain Edinburgh throughout the 2013–14 season, missing out on a place in the Amlin Challenge Cup on points difference. Laidlaw was also named as the captain of Scotland internationally in 2013, and has since captained the country 39 times, the most of any Scottish player.

With injury to John Barclay, Laidlaw was reinstated as the Scottish Captain during the 2018 end-of-year rugby union internationals.

After 7 years playing for and captaining the national side Laidlaw retired from international rugby in December 2019. Laidlaw's 714 points in 76 test matches places him second on the Scotland all-time points list behind Chris Paterson. [7]

On 6 May 2017, Laidlaw was called up to 2017 British and Irish Lions tour to New Zealand as England international Ben Youngs withdrew from the tour party due to family reasons. [8]

In 2018, Greig Laidlaw was capped with the Barbarians against England during the mid-year rugby tests. He scored a conversion and a try, helping his team beat England 45–63 at Twickenham. [9] 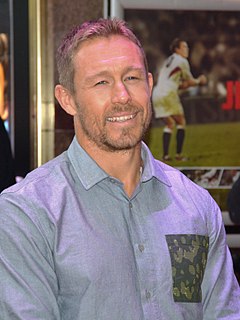 Edinburgh Rugby is one of the two professional rugby union teams from Scotland. The club competes in the Pro14, along with Glasgow Warriors, its oldest rival. Edinburgh plays most of its home games at Murrayfield Stadium. 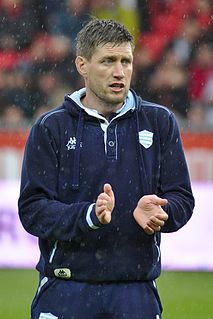 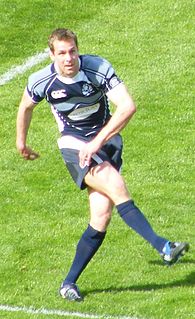 Nathan Hines is an Australian-born former rugby union and rugby league footballer. He played at international level for Scotland, winning 77 caps, and at club level for Edinburgh, Perpignan, and Clermont Auvergne among others. He also played rugby league.

Roy James Laidlaw is a Scottish rugby union player. Laidlaw was capped 47 times, as a scrum half, for Scotland between 1980–1988, and British Lions in New Zealand in 1983. 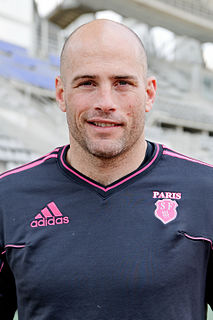 James William Hook is a former Welsh rugby union player. Hook has won 81 caps for Wales and is Wales' fourth highest all-time points scorer. Most often playing as a fly-half, Hook is known as a utility player, and has also played as a centre, wing and fullback. 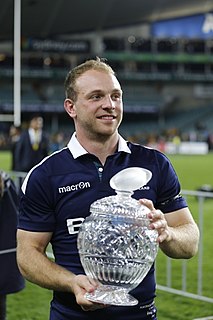 Greig Tonks is a Scottish former rugby union player who played for London Irish in the position of Fullback, Centre or Fly-half. He is currently a coach at Rams. 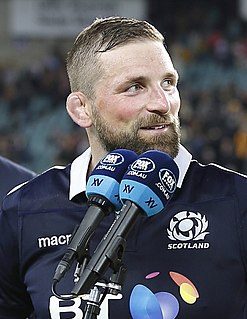 John Adam Barclay is a Scottish former rugby union player, who played as a flanker. He made 76 international appearances for the Scotland national team 2007–2019. He played at three world cups. He played club rugby for Glasgow Warriors, Scarlets and Edinburgh Rugby. 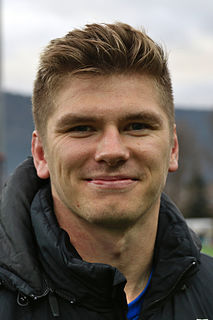 Owen Andrew Farrell is an English professional rugby union player, currently playing for Championship side Saracens and is captain of the England National Team. Farrell has played international rugby for England since 2012. 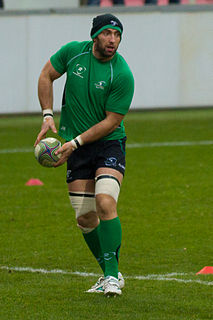 Roderick Robert Grant is a coach and former rugby union player with Edinburgh and Scotland sevens. During the 2008–09 IRB Sevens World Series, Grant took over as captain from the injured Scott Forrest and went on to captain Edinburgh at the start of the 2010–11 Celtic League campaign.

Conor Murray is an Irish rugby union player who plays for Munster in the Pro14 and European Rugby Champions Cup. Internationally, Murray has represented Ireland and the British and Irish Lions. He plays as a scrum-half and represents Garryowen in the All-Ireland League.

Blair Simon Kinghorn is a Scottish international rugby union player who plays for Scottish-based Edinburgh Rugby in the Guinness Pro14.