Harvey Nichols, founded in 1831, is a British luxury department store chain with a flagship store in Knightsbridge, London. It sells fashion collections for men and women, fashion accessories, beauty products, wine and food.

In 1831 Benjamin Harvey opened a linen shop in a terraced house on the corner of Knightsbridge and Sloane Street in London.[ citation needed ]

In 1835 the shop expanded to number 8 next door, and would continue to expand into successive properties over the following years. In 1841 Benjamin employed James Nichols from Oxfordshire. In 1845 Nichols was promoted to management and in 1848 he married Harvey's niece, Anne Beale.[ citation needed ]

Benjamin Harvey died in 1850, leaving the business in the care of his wife Anne, who went into partnership with James Nichols to form Harvey Nichols & Co.[ citation needed ]

In 1889, the existing space was demolished to make way for a new department store. The building was designed by C. W. Stephens and built in stages between 1889 and 1894. In 1904 the location underwent a change of address to become 109-125 Knightsbridge. In 1920, Harvey Nichols was purchased by Debenhams. [1]

In 1975 a restaurant called Harvey's opened on the fifth floor.[ citation needed ]

In 1985 Debenhams including Harvey Nichols was acquired by the Burton Group. In 1991, Dickson Poon of Dickson Concepts acquired Harvey Nichols from the Burton Group. Harvey Nichols was refurbished. A new restaurant, café, bar and food market, designed by architects Wickham & Associates, opened on the fifth floor in 1992, with a direct access lift which allowed for later opening hours after the main store closed. Ten years later in 2002, the restaurant interior was replaced by a new design by Lipschutz Davison.

On 17 February 2014 [2] Stacey Cartwright joined Harvey Nichols as Chief Executive Officer of the Harvey Nichols Group of Companies. She replaced Joseph Wan, who held the position of CEO for 21 years and who retired at the end of March 2014.

Former CEO Stacey Cartwright left the company on 30 April 2018, handing over control of the company to Daniela Rinaldi and Manju Malhotra. Under their management, Harvey Nichols generated 229 million pounds for the year to 30 March 2019, which marked a nine percent increased from the year before. [3]

In November 2019, co-chief operating officer Daniela Rinaldi resigned from the company, after working for the department store for nearly 35 years. The other co-operating chief, Manju Malhora, will continue the role in a solo capacity, working closely with executive director Pearson Poon. [4]

In the United Kingdom, Harvey Nichols has stores in London, Leeds, Edinburgh, Birmingham, Manchester, Bristol and a Beauty Bazaar at Harvey Nichols' store in Liverpool. It also has a store at Dundrum Town Centre, Dublin in Ireland.

The London flagship store is located in Knightsbridge, a few streets from rival Harrods. In addition to its fashion retailing business, Harvey Nichols redeveloped the top floor of its London flagship store to create a restaurant, bar, café, wine shop, and foodmarket. A similar concept operates from the top floors of all Harvey Nichols full-size stores.

In 1996 Harvey Nichols launched its first stand-alone restaurant in London, the OXO Tower Restaurant, Bar, and Brasserie, viewing the River Thames. OXO and three of the in-store restaurants were designed by London-based architects Lifschutz Davidson Sandilands.

Harvey Nichols opened a 22,000 square foot store in Manesty's Lane in the Liverpool One shopping area in 2012. [5]

It has a store in Al-Faysaliyah Tower in Riyadh, Saudi Arabia, and two stores (The Landmark and Pacific Place) and a Beauty Bazaar (The One) in Hong Kong.

In Turkey, Harvey Nichols opened a store in Istanbul's Kanyon Shopping Mall on 13 October 2006 and Ankara's Next Level in 2017 (now closed as of 2020). As of 2020, the Kanyon store is operated by DEMSA Group despite not featured on Harvey Nichols' website.

In February 2006, it opened a store in Dubai, designed by architecture firm Callison in the Mall of the Emirates. The Dubai store is operated by Al Tayer Insignia, the luxury retail arm of Al Tayer Group.

A store in the Grand Indonesia mall also designed by Callison in Jakarta, Indonesia was operated by the Indonesian retail conglomerate Mitra Adiperkasa (MAP) from October 2008, but closed due to poor performance in November 2010. [7]

On 25 January 2009, a new store opening was announced for Kuwait which opened in 2012. The store is located at The Avenues Mall.

In 2015, Harvey Nichols opened a store in Baku, Azerbaijan. After four months, Harvey Nichols terminated its licence agreement with the Baku store, which now trades under BARKERS. [8] [9]

In 2018, Harvey Nichols opened a store at Doha Festival City in Doha, Qatar. The Doha store is operated by Al Mana Group of Companies. [10]

Soon after opening a new store in Edinburgh in 2002, the managers faced an official complaint after staff tried to stop a homeless man selling the Big Issue magazine outside. [11]

In mid-2003 objections were made to a Harvey Nichols magazine advertisement that appeared in Vogue, ELLE and Harpers & Queen and on a poster. The complainants objected that the advertisement was irresponsible, because it showed unsafe driving and was offensive to people who had been, or who knew people who had been involved in road accidents. [12]

In September 2013, Harvey Nichols resumed the sale of fur in its United Kingdom stores following a decade-long embargo. [13] The decision attracted much criticism, focusing on the way animals were treated. The company denied allegations of cruelty and insisted its furs are ethically sourced from reputable suppliers. [14]

Harrods Limited is a department store located on Brompton Road in Knightsbridge, London, England. It is owned by the state of Qatar via its sovereign wealth fund, the Qatar Investment Authority. The Harrods brand also applies to other enterprises undertaken by the Harrods group of companies including Harrods Estates, Harrods Aviation and Air Harrods, and formerly to Harrods Buenos Aires, sold by Harrods in 1922 and closed as of 2011. 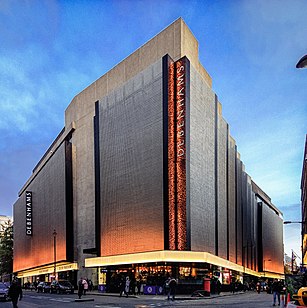 Debenhams is a British multinational retailer operating department stores in the United Kingdom and Denmark, with franchise stores in other countries. The company was founded in 1778, as a single store in London and has now grown to 178 locations across those countries. The headquarters are in Regent's Place in the London Borough of Camden and the company owns the Danish department store chain, Magasin du Nord. The range of goods sold includes clothing, household items and furniture.

Metrocentre, is a shopping centre and entertainment complex in Gateshead. It is located on the former site of Dunston Power Station, near to the River Tyne. 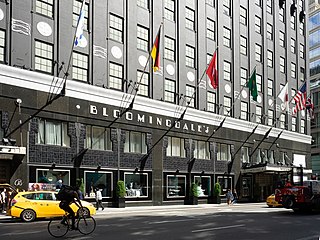 Sogo Co., Ltd. is a department store chain that operates an extensive network of branches in Japan. It once owned stores in locations as diverse as Beijing in China, Causeway Bay in Hong Kong, Taipei in Taiwan, Jakarta & Surabaya in Indonesia, Kuala Lumpur in Malaysia, Singapore, Bangkok in Thailand, London in United Kingdom, but most of these international branches are now closed or operated by independent franchises.

Liverpool ONE is a shopping, residential, and leisure complex in Liverpool, England. The project involved the redevelopment of 42 acres of land in the city centre. It is a retail-led development anchored by department stores Debenhams and John Lewis, with additional elements including leisure facilities, apartments, offices, public open spaces, restaurants, and transport improvements. The completion of Liverpool ONE significantly boosted the local economy, while lifting Liverpool into the top five most popular retail destinations in the UK. 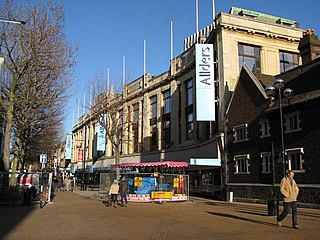 The Blanchardstown Centre is one of Ireland's largest shopping centres, located in Blanchardstown, Dublin, Ireland. It opened in October 1996 and was extended in 2004 to create extra retail space. It lies in the administration of Fingal County Council.

The Merry Hill Centre is a shopping mall in Brierley Hill near Dudley, England. It was developed between 1985 and 1990, with several subsequent expansion and renovation projects.

House of Fraser is a British department store group with 47 outlets across the United Kingdom. It was established in Glasgow, Scotland in 1849 as Arthur and Fraser. By 1891, it was known as Fraser & Sons. The company grew steadily during the early 20th century, and after the Second World War, a large number of acquisitions transformed the company into a national chain.

Lewis's was a chain of British department stores that operated from 1856 to 2010. The owners of Lewis's have gone into administration many times over the years, including 1991. The first store, which opened in Liverpool city centre, became the flagship of the chain of stores operating under the Lewis's name. Several stores in the chain were bought in 1991 by the company Owen Owen and continued to operate under the Lewis's brand name for several years, but after the closure of the Manchester store in 2002, only the original Liverpool store continued to trade under the Lewis's name. This store was sold in 2007 to the Vergo Retail Ltd and closed in 2010.

Mall of the Emirates (November 2005 and is located at interchange four on Sheikh Zayed road.

Al Tayer Group is a privately held holding company established in 1979. Currently the group has operations in 6 countries in the Middle East, including nearly 200 stores and 23 showrooms in multiple markets in the Middle East. The company is headquartered in Dubai, UAE and employs nearly 9,000 people. 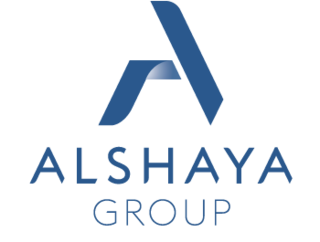 M.H. Alshaya Co. is a multinational retail franchise operator headquartered in Kuwait. It operates 90 consumer retail brands across the Middle East and North Africa, Russia, Turkey and Europe. In addition to its retail operations, the Alshaya group has holdings in real estate, construction, hotels, automotive and general trading, largely centred in the Middle East.

Tessuti is a chain of designer stores in the United Kingdom, retailing men’s and women’s designer collections, including clothing, shoes and accessories for men and women. Tessuti was founded in 1985 by David Light and 40% of the business was acquired by JD Sports PLC in May 2012, since becoming a key part of the JD Sports PLC strategy. In 2016, JD Sports PLC acquired Tessuti in full.

Department stores are an established retail format globally. The format has origins in France, the United Kingdom and United States, among others.