To have a head for heights means that one has no acrophobia, an irrational fear of heights, and is not particularly prone to fear of falling or suffering from vertigo, the spinning sensation that can be triggered, for example, by looking down from a high place.

A head for heights is frequently cited as a requirement when mountain hiking or climbing for a particular route as well as paragliding and hang-gliding. It is needed for certain jobs, such as for wind turbine technicians, chimney sweeps, roofers, steeplejacks and window cleaners. Mohawk ironworkers have worked for generations erecting New York City skyscrapers, [1] though it is a myth they have an innate skill for doing so. [2]

Unlike acrophobia, a natural fear of heights is a normal phenomenon. When one finds oneself in an exposed place at a great height, one feels one's own posture as unstable. A normal fear of heights can generate feelings of anxiety as well as autonomic symptoms like outbreaks of sweat.

Causes of fear of heights

There are logical biological causes of fear of falling. Firstly, there is the innate so-called "cliff edge phenomenon", whereby even toddlers, as well as many animals, avoid large drops, even without having previously had a bad experience. [3] [4]

Vertigo itself is caused by a destabilization of the posture which, when it occurs at height, results from too large a distance from the eyes to the nearest visible solid object and is referred to as "distance vertigo" or "height vertigo". In order to see the object in space, the head starts to sway imperceptibly and "location reflex" then causes the body to sway with it. At the same time, the body stabilizes its position using the periphery of the retina, but when someone looks down they now lack this stabilizing factor. This physiological swaying is normally counteracted by the body's vestibular system and proprioceptive sense. However, for example, if there is damage to the sense of balance, in fact, the risk of falling is increased.

A balance disorder is a disturbance that causes an individual to feel unsteady, for example when standing or walking. It may be accompanied by feelings of giddiness, or wooziness, or having a sensation of movement, spinning, or floating. Balance is the result of several body systems working together: the visual system (eyes), vestibular system (ears) and proprioception. Degeneration or loss of function in any of these systems can lead to balance deficits. 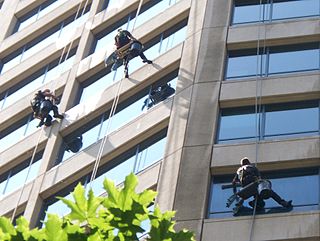 Acrophobia is an extreme or irrational fear or phobia of heights, especially when one is not particularly high up. It belongs to a category of specific phobias, called space and motion discomfort, that share both similar causes and options for treatment. 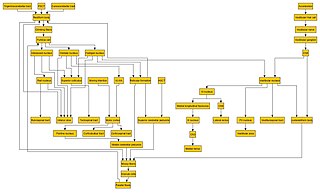 The vestibular system, in vertebrates, is a sensory system that provides the leading contribution to the sense of balance and spatial orientation for the purpose of coordinating movement with balance. Together with the cochlea, a part of the auditory system, it constitutes the labyrinth of the inner ear in most mammals.

Dizziness is an imprecise term that can refer to a sense of disorientation in space, vertigo, or lightheadedness. It can also refer to disequilibrium or a non-specific feeling, such as giddiness or foolishness.

Astasis is a lack of motor coordination marked by an inability to stand, walk or even sit without assistance due to disruption of muscle coordination.

Vertigo is a condition where a person has the sensation of movement or of surrounding objects moving when they are not. Often it feels like a spinning or swaying movement. This may be associated with nausea, vomiting, sweating, or difficulties walking. It is typically worse when the head is moved. Vertigo is the most common type of dizziness.

The vestibulospinal tract is a neural tract in the central nervous system. Specifically, it is a component of the extrapyramidal system and is classified as a component of the medial pathway. Like other descending motor pathways, the vestibulospinal fibers of the tract relay information from nuclei to motor neurons. The vestibular nuclei receive information through the vestibulocochlear nerve about changes in the orientation of the head. The nuclei relay motor commands through the vestibulospinal tract. The function of these motor commands is to alter muscle tone, extend, and change the position of the limbs and head with the goal of supporting posture and maintaining balance of the body and head.

A set of equations describe the resultant trajectories when objects move owing to a constant gravitational force under normal Earth-bound conditions. For example, Newton's law of universal gravitation simplifies to F = mg, where m is the mass of the body. This assumption is reasonable for objects falling to earth over the relatively short vertical distances of our everyday experience, but is untrue over larger distances, such as spacecraft trajectories.

Balance in biomechanics, is an ability to maintain the line of gravity of a body within the base of support with minimal postural sway. Sway is the horizontal movement of the centre of gravity even when a person is standing still. A certain amount of sway is essential and inevitable due to small perturbations within the body or from external triggers. An increase in sway is not necessarily an indicator of dysfunctional balance so much as it is an indicator of decreased sensorimotor control.

Poor posture is the posture that results from certain muscles tightening up or shortening while others lengthen and become weak, which often occurs as a result of one's daily activities. It may lead to pain, injury, or other health problems.

Illusions of self-motion occur when one perceives bodily motion despite no movement taking place. One can experience illusory movements of the whole body or of individual body parts, such as arms or legs.

The spins is an adverse reaction of intoxication that causes a state of vertigo and nausea, causing one to feel as if "spinning out of control", especially when lying down. It is most commonly associated with drunkenness or mixing alcohol with other psychoactive drugs such as cannabis. This state is likely to cause vomiting, but having "the spins" is not life-threatening unless pulmonary aspiration occurs.

The righting reflex, also known as the labyrinthine righting reflex, is a reflex that corrects the orientation of the body when it is taken out of its normal upright position. It is initiated by the vestibular system, which detects that the body is not erect and causes the head to move back into position as the rest of the body follows. The perception of head movement involves the body sensing linear acceleration or the force of gravity through the otoliths, and angular acceleration through the semicircular canals. The reflex uses a combination of visual system inputs, vestibular inputs, and somatosensory inputs to make postural adjustments when the body becomes displaced from its normal vertical position. These inputs are used to create what is called an efference copy. This means that the brain makes comparisons in the cerebellum between expected posture and perceived posture, and corrects for the difference. The reflex takes 6 or 7 weeks to perfect, but can be affected by various types of balance disorders.

The broken escalator phenomenon, also known as the escalator effect and the Walker effect, is the sensation of losing balance or dizziness reported by some people when stepping onto an escalator which is not working. It is said that there is a brief, odd sensation of imbalance, despite full awareness that the escalator is not going to move. 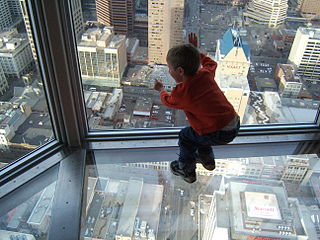 The fear of falling (FOF), also referred to as basophobia, is a natural fear and is typical of most humans and mammals, in varying degrees of extremity. It differs from acrophobia, although the two fears are closely related. The fear of falling encompasses the anxieties accompanying the sensation and the possibly dangerous effects of falling, as opposed to the heights themselves. Those who have little fear of falling may be said to have a head for heights. Basophobia is sometimes associated with astasia-abasia, the fear of walking/standing erect.

Roller coaster phobia is a colloquial and slang term describing an individual's fear of roller coasters and other rides which involve excessive heights, restraints or g-forces on the body. While roller coasters are a popular theme park attraction, certain people feel nauseated, afraid, dizzy, or unsafe when riding roller coasters. In many cases, this fear is related to other phobias – such as acrophobia, claustrophobia or emetophobia – a condition like vertigo, or to a traumatic event. While not an officially recognized phobia, some cases have been treated successfully with a specialized therapy program.

Exposure is a climbing and hiking term. Sections of a hiking path or climbing route are described as "exposed" if there is a high risk of injury in the event of a fall because of the steepness of the terrain. If such routes are negotiated without any protection, a false step can result in a serious fall. The negotiation of such routes can cause fear of falling because of the potential danger.

The term chronic subjective dizziness (CSD) is used to describe a commonly encountered type of dizziness that is not easily categorized into one of several other types, and for which the physical examination is typically normal. Patients with CSD frequently initially suffer a sudden injury of some sort to their vestibular system, the neurologic network that preserves sense of balance. Even after this initial injury has healed, people with CSD usually describe a vague sense of unsteadiness worsened by triggers in their environment such as high places, standing on moving objects, or standing in motion-rich environments like busy streets or crowds. There is a clear indication that anxiety and other mental illnesses play a role in the dizziness symptoms that occur with CSD. However, the condition is categorized as chronic functional vestibular disorder, not as a structural or psychiatric condition. 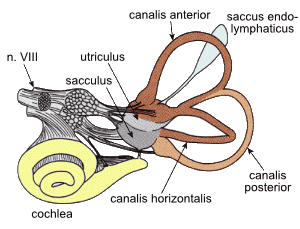 Vestibular rehabilitation (VR), also known as vestibular rehabilitation therapy (VRT), is a specialized form of physical therapy used to treat vestibular disorders or symptoms, characterized by dizziness, vertigo, and trouble with balance, posture, and vision. These primary symptoms can result in secondary symptoms such as nausea, fatigue, and lack of concentration. All symptoms of vestibular dysfunction can significantly decrease quality of life, introducing mental-emotional issues such as anxiety and depression, and greatly impair an individual, causing them to become more sedentary. Decreased mobility results in weaker muscles, less flexible joints, and worsened stamina, as well as decreased social and occupational activity. Vestibular rehabilitation therapy can be used in conjunction with cognitive behavioral therapy in order to reduce anxiety and depression resulting from an individual's change in lifestyle.