HABS photograph and drawing
First Bank of the United States [1]

In 1933, NPS established the Historic American Buildings Survey following a proposal by Charles E. Peterson, a young landscape architect in the agency. [2] It was founded as a constructive make-work program for architects, draftsmen and photographers left jobless by the Great Depression. It was supported through the Historic Sites Act of 1935. [3] [4] [5] [6]

Guided by field instructions from Washington, D.C., the first HABS recorders were tasked with documenting a representative sampling of America's architectural heritage. [7] They began to document America's built environment, carrying out multi-format surveys that amassed a "more than 581,000 measured drawings, large-format photographs, written histories, and original field notes for more than 43,000 historic structures and sites dating from Pre-Columbian times to the twentieth century." [3] By creating an archive of historic architecture, HABS provided a database of primary source material and documentation for the then-fledgling historic preservation movement. [8]

The Historic American Engineering Record (HAER) program was founded on January 10, 1969, by NPS and the American Society of Civil Engineers. HAER documents historic sites, structures, mechanical, and engineering artifacts. The Maritime Administration works with HAER to "document historic vessels prior to their disposal." [18]

Since the advent of HAER, the combined program is typically called "HABS/HAER". Eric DeLony headed HAER from 1987 to 2003. [19]

In 2001, along with the Library of Congress, the NPS, and the American Society of Landscape Architects signed a Memorandum of Understanding which established a working relationship between the three organizations. Following the signing of this agreement, these organizations together signed the Tripartite Agreement in 2010, making "HALS a permanent federal program". [22]

The NPS deals with the planning and operations of HALS, standardizes the formats and develops the guidelines for recording landscapes. [22]

The permanent collection of HABS/HAER/HALS are housed at the Library of Congress, which was established in 1790 (and reestablished after the disastrous fire of 1814 in Washington, D.C. by purchasing former third President Thomas Jefferson's personal library at Monticello in 1815) as the replacement reference library of the United States Congress. It has since been expanded to serve as the national library of the United States; U.S. publishers are required to deposit a copy of every copyrighted and published work, book monograph and magazine. As a branch of the United States Government, its created works are in the public domain in the US. Many images, drawings, and documents are available through the Prints and Photographs Online Catalog, including proposed, demolished, and existing structures; locales, projects, and designs. [23] 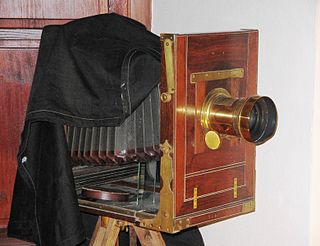 Jack E. Boucher was an American photographer for the National Park Service for more than 40 years beginning in 1958. He served as the Chief Photographer for the Historic American Buildings Survey (HABS). In 1966 he left the Park Service for two years to supervise New Jersey's State Historic Preservation program, including the State's roadside marker program, 18 historic museum houses, several lighthouses, and two historic villages. Offered his old job back by the Park Service/HABS in 1970, he left New Jersey to return to NPS/HABS and the highly specialized job of large format photographic architectural documentation. His work took him to 49 States, the Virgin Islands and Puerto Rico. April 2008 was the fiftieth anniversary of his employment with the National Park Service's "HABS" program. He traveled with 900 pounds of photographic equipment.