Holy Moses were formed in Aachen, North Rhine-Westphalia, in 1980. [1] The band's first line-up was formed by bassist Ramon Brüssler, drummer Peter Vonderstein and guitarist Jochen Fünders during high school, the latter of whom also handled the band's vocals. This line-up played its first live show only four days after its formation, and released a demo titled Black Metal Masters in the same year. Vonderstein and Fünders left the group in 1981, and were replaced by drummer Paul Linzenich, vocalist Iggy, and guitarist Andy Classen from the local group Desaster. In December 1981, Iggy left the group and was replaced by ex-Desaster bassist and girlfriend of Andy, Sabina Classen (née Hirtz). The band performed their first live show with the new stable line-up in November 1982 and released a string of demo tapes, including Walpurgis Night in 1985, and The Bitch in 1986, and also appeared on the split-album compilation Metallic Bunnys.

In 1986, Holy Moses released their debut album Queen of Siam through independent label Aaarrg, with Herbert Dreger on drums (Linzenich left shortly before the recording to focus on his university studies). After the release of the record, Dreger was sacked for not showing up to a support show with Agent Steel, and Brüssler (the only original member of Holy Moses remaining), left the band. Both members were replaced by nineteen-year-old Uli Kusch and Andre Chapelier respectively. The following year, Holy Moses released their sophomore effort Finished With the Dogs, which was a much heavier and cleaner-sounding album than its predecessor. The album was a critical success around the world, earning the band a distribution deal through Warner Music Group (WEA) and tours of Europe with Angel Dust, Rage, Steeler, Paganini, D.R.I. and Holy Terror, finishing with a headlining show in Hamburg.

In 1988, Sabina Classen became the host of a German heavy metal TV show called Mosh alongside journalist Götz Kühnemund. Meanwhile, Holy Moses began work on their third studio album. Released in 1989, The New Machine of Liechtenstein became another successful record from the group, with the band playing heavier and more technical thrash metal than on the previous two albums. The band toured with Sacred Reich and Forbidden, and performed at the Dynamo Open Air Festival, with second guitarist Rainer Laws added to the line-up. Around this time, Holy Moses severed their ties with Warner Music Group as a result of the record company's new staff trying to coerce the band into departing from their thrash metal influences and write more commercial music.

In 1990, Laws quit Holy Moses due to illness and retired to focus his skills as a graphic artist, leaving the band as a four-piece. The band then recorded World Chaos, released through West Virginia Records, an independent label owned by new band manager Uli Wiehagen. Kusch soon quit the band to join Gamma Ray, to be replaced by Atomic Steif. In 1992 he left and was replaced by Sven "Meff" Hervig, who actually played all drums on Terminal Terror (1991) as a session drummer.

Soon after the release of Reborn Dogs, Sabina Classen left Holy Moses and the band subsequently dissolved. Classen went to form Temple of the Absurd with Warpath members Schrödey and Ozzy Frese, and drummer Mike Rech.

Two years after the split of Holy Moses, Andy Classen released a new record under the Holy Moses moniker titled No Matter What's the Cause. The line-up featured on the album included Classen on guitar and vocals, S.O.D.'s Dan Lilker on bass, and drummer Meff. The album was more hardcore/death metal influenced than the band's previous thrash-oriented efforts, and was not met with substantial success.

In 1999, during touring for the second Temple of the Absurd album, Sabina Classen collapsed on stage and was hospitalised. The singer fell into a serious illness and suffered a motorcycle crash in 2000. Following this, Temple of the Absurd disbanded and Sabina began to work with Andy again on what would eventually become new Holy Moses material. The band was reformed in early 2001 with Franky Brotz and Joern Schubert on guitar, Jochen Fünders on bass and Julien Schmidt on drums. The band performed several comeback shows throughout Europe and South Korea, and released an EP titled Master of Disaster through Century Media. Andy Classen stayed with the band as songwriter.

In 2002, Holy Moses released Disorder of the Order, their first album with the new line-up. Michael Hankel, guitarist of Erosion and friend of Andy's, replaced Schubert soon after the album's release, and became a main songwriter of the band. The band performed at Wacken Open Air festival in 2004, and after fan demand for another Holy Moses album, the group released Strength Power Will Passion in May the following year. It is the first album without input from Andy Classen. After securing a deal through Wacken Records and a subsequent re-release of the band's material, Fünders and Schmidt left Holy Moses to be replaced by Thomas Neitsch and a returning Atomic Steif.

Holy Moses released their tenth album Agony of Death in 2008 with all music written by new guitar player Oliver Jaath and Michael Hankel. They released their eleventh album Redefined Mayhem on April 28, 2014. [2] The band has reportedly been working on new material for their twelfth studio album. [3] [4] [5]

Forbidden was a thrash metal band from the San Francisco Bay Area, California. Formed in 1985 as Forbidden Evil, the group was founded by Jim Pittman and guitarist Robb Flynn. Since their formation, Forbidden have broken up and reformed twice with numerous line-up changes. The most recent line-up of the band was Russ Anderson (vocals), Craig Locicero (guitar), Matt Camacho (bass), Steve Smyth (guitar) and Sasha Horn (drums). After breaking up for the first time in 1997 and briefly returning in 2001, Forbidden reunited once again in 2007 but has been on an indefinite hiatus since 2012. 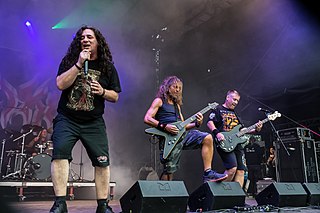 Tankard is a German thrash metal band from Frankfurt am Main, founded in 1982. Along with Kreator, Destruction and Sodom, Tankard is often considered one of the "Big Teutonic Four" of Teutonic thrash metal. They released their first record in 1986 and continue to write and record in the same vein: fast metal songs in honour of alcohol.

Ulrich Kusch is a heavy metal drummer and songwriter. He is best known for playing with Helloween, Gamma Ray, Masterplan and Holy Moses, among others. He is also known for his technical style of playing, fast-paced speed metal-like rhythm, and capable songwriting abilities.

Mekong Delta is a German thrash metal band, formed in 1985. 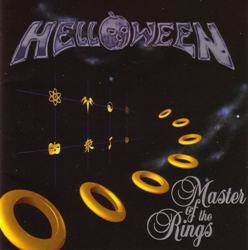 Master of the Rings is the sixth studio album by German power metal band Helloween, released in 1994. It is the first to feature new members Andi Deris and Uli Kusch. 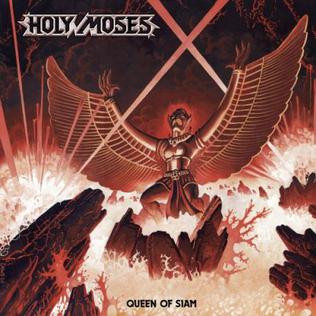 Queen of Siam is the debut album by Holy Moses, released in 1986 on AAARRG Records. It was re-released in 2005 with "Walpurgisnight" demo, recorded in 1984–1985, as bonus tracks. All music and lyrics are by Andy Classen and Sabina Classen.

Sabina Classen is a German thrash metal singer, best known as lead vocalist of Holy Moses and Temple of the Absurd. 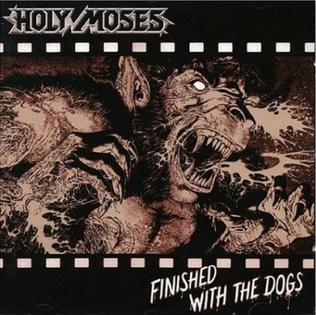 Finished with the Dogs is the second album by Holy Moses, released in 1987 on AAARRG Records. It was re-released on August 5, 2005 through Armageddon with 4 bonus live tracks. All music and lyrics are by Andy Classen and Sabina Classen. 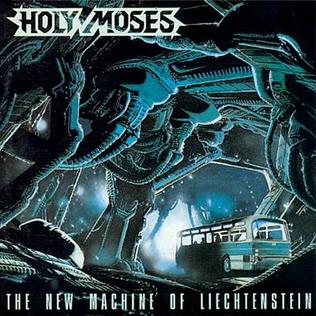 The New Machine of Liechtenstein is the third album by Holy Moses, released in 1989 on WEA. It was re-released on 5 August 2005 through Armageddon and then in 2007 by Locomotive with 2 bonus live tracks. 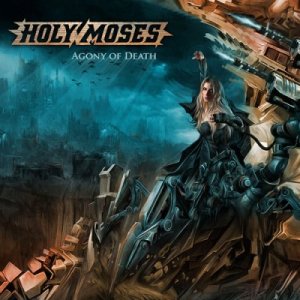 Agony of Death is the tenth studio album by German thrash metal band Holy Moses. The album was released in three different dates of 2008, on September 26 in Germany, September 29 in Europe and October 7 in the United States through SPV/Steamhammer.

Strength Power Will Passion is the ninth studio album by German thrash metal band, Holy Moses. It was released in May, 2005 on Armageddon Music. Track 12 includes a hidden track. 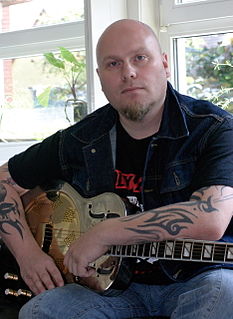 Ferdy Doernberg is an English-German heavy metal musician. He is the last original member of Rough Silk, which he founded in 1989. He has also performed with Helloween and Holy Moses. Since 1997, he has been the keyboardist for Axel Rudi Pell's band. From 2006 to 2009, he played the keyboards for Eden's Curse, which was founded by Michael Eden and Paul Logue (Bassist).

Darxon is a heavy metal band created in 1983, in Dortmund, Germany. Their debut album, Killed in Action, was recorded as a quartet of vocalist Massimo DeMatteis, guitarist Markus Szarf, bassist Peter Schmidt, and drummer Dominik Hulshorst, produced by Ferdinand Kother at the Tonstudio Cooperative GmbH in Bochum. A four track EP, Tokyo, was released in 1985, with a 7" vinyl single, Holding On, following in 1986. 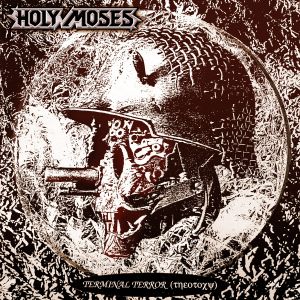 No Matter What's the Cause is the seventh full-length studio album by the German Thrash metal band Holy Moses.

Reborn Dogs is the sixth studio album by German thrash metal band Holy Moses, released in 1992. The album was re-issued on 1 March 2006.

Cripper was a thrash metal band from Hannover, Lower Saxony, Germany. Was founded in 2005 by musicians Christian Bröhenhorst and Jonathan Stenger and split up in 2018.