Hookers have a great deal of contact with the ball, as they usually play the role of acting halfback or dummy half, picking the ball up from the play-the-ball that follows a tackle. [3] Hookers therefore have much responsibility in that they then decide what to do with the ball, [4] whether that be to pass it (and to whom), run with it, or occasionally to kick it. Therefore, together with the two halves and fullback, hooker is one of the four key positions that make up what is sometimes called a team's 'spine'. [5] A trend of halves converting into hookers followed the introduction of the 10 metre rule, [6] and many players have switched between these positions in their careers such as Geoff Toovey, Andrew Johns, Craig Gower and Peter Wallace.

The laws of rugby league state that the hooker is to be numbered 9. [7] However, in some leagues, such as Super League, players can wear shirt numbers which do not have to conform to this system.

One book published in 1996 stated that in senior rugby league, the hooker and stand-off/five-eighth handled the ball more often than any other position. [8] In the 2013 NRL season the top six players with the most tackles were all hookers. [9]

Rugby football is the collective name for the team sports of rugby union and rugby league.

Rugby union, commonly known simply as rugby, is a close-contact team sport that originated at Rugby School in the first half of the 19th century. One of the two codes of rugby football, it is based on running with the ball in hand. In its most common form, a game is played between two teams of 15 players each, using an oval-shaped ball on a rectangular field called a pitch. The field has H-shaped goalposts at both ends.

Rugby league football, commonly known as just rugby league or simply league, football, footy or rugby is a full-contact sport played by two teams of thirteen players on a rectangular field measuring 68 metres wide and 112–122 metres long with H shaped posts at both ends of the field. It is one of the two extant codes of rugby football, the other being rugby union. It originated in Yorkshire in 1895 as the result of a split from the Rugby Football Union over the issue of payments to the players. The rules of the game governed by the new Northern Rugby Football Union progressively changed from those of the RFU with the specific aim of producing a faster and more entertaining game to appeal to spectators, on whose income the new organisation and its members depended. Due to its high-velocity contact, cardio-based endurance and minimal use of body protection, rugby league is widely regarded as the toughest and most brutal collision sport in the world. 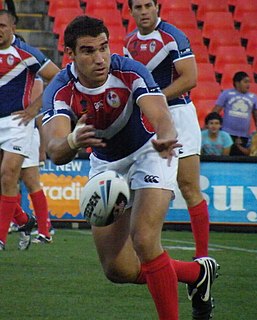 Mark McLinden is an Australian former professional rugby footballer of the 1990s and 2000s. He played rugby league in the NRL for Australian club, the Canberra Raiders and in the Super League for English club the London Broncos/Harlequins RL, which he also captained. A Country New South Wales representative backline player, McLinden finished his career in 2009 with a few rugby union games for the Queensland Reds in Super Rugby. 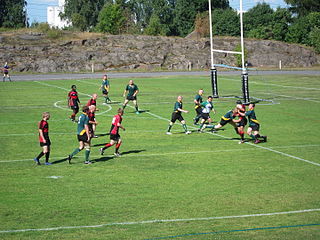 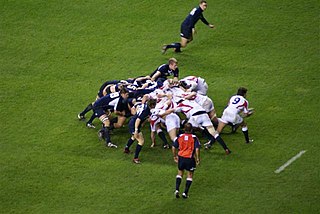 In rugby union a scrum is a means of restarting play after a minor infringement. It involves up to eight players from each team, known as the pack or forward pack, binding together in three rows and interlocking with the three opposing teams front row. At this point the ball is fed into the gap between the two forward packs and they both compete for the ball to win possession. Teams can be penalised for intentionally causing the scrum to collapse, and for not putting the ball into the scrum correctly. A scrum is most commonly awarded when the ball is knocked forward, or passed forward, or when a ball becomes trapped in a ruck or maul. Because of the physical nature of scrums, injuries can occur, especially in the front row. 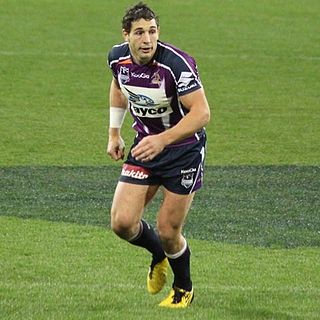 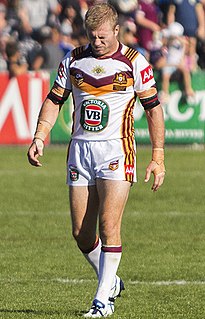 Ryan Hinchcliffe is an Australian former professional rugby league footballer who last played for the Huddersfield Giants in the Super League, as a lock and hooker, and previously played for the Melbourne Storm in the National Rugby League. 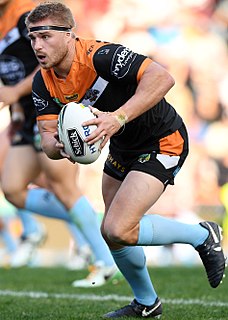 Matt McIlwrick is a New Zealand former professional rugby league footballer who played as a hooker and lock.

Adam Clydsdale is an Australian former professional rugby league footballer. He plays as hooker for the Maitland Pickers in the Newcastle Rugby League. He previously played for the Newcastle Knights, Canberra Raiders and Cronulla-Sutherland Sharks in the NRL. Now captain coach of reserve grade scone. 2022