Last updated June 24, 2021
"Indentation" redirects here. For other uses, see Indentation (disambiguation).
Empty space at the beginning of a line to signal the start of a new paragraph

In the written form of many languages, an indentation or indent is an empty space at the beginning of a line to signal the start of a new paragraph. Many computer languages have adopted this technique to designate "paragraphs" or other logical blocks in the program.

For example, the following lines are indented, using between one and six spaces:

This paragraph is indented by 1 space.

This paragraph is indented by 3 spaces.

This paragraph is indented by 6 spaces.

In computer programming, the neologisms outdent, unindent and dedent are used to describe the reversal of the indentation process, realigning text with the page margin (or with previous, lesser, levels of indentation).

In right-to-left languages (e.g. Hebrew and Arabic), indentation is used just the same, but from the right margin of the paper, where the line begins.

There are three main types of indentation, illustrated below in relation to borders representing the page dimensions.

Debates over where to indent, whether to use spaces or tabs, and how many spaces to use are often hotly debated among programmers, leading some to classify indentation as akin to a religious war. [1] In 2006 a third method of indentation was proposed, called elastic tabstops.

Computer programming is the process of designing and building an executable computer program to accomplish a specific computing result or to perform a specific task. Programming involves tasks such as: analysis, generating algorithms, profiling algorithms' accuracy and resource consumption, and the implementation of algorithms in a chosen programming language. The source code of a program is written in one or more languages that are intelligible to programmers, rather than machine code, which is directly executed by the central processing unit. The purpose of programming is to find a sequence of instructions that will automate the performance of a task on a computer, often for solving a given problem. Proficient programming thus often requires expertise in several different subjects, including knowledge of the application domain, specialized algorithms, and formal logic.

Python is an interpreted high-level general-purpose programming language. Python's design philosophy emphasizes code readability with its notable use of significant indentation. Its language constructs as well as its object-oriented approach aim to help programmers write clear, logical code for small and large-scale projects. 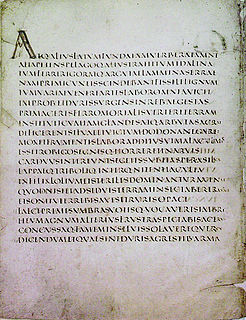 Scriptio continua, also known as scriptura continua or scripta continua, is a style of writing without spaces, or other marks between the words or sentences. The form also lacks punctuation, diacritics, or distinguished letter case. In the West, the oldest Greek and Latin inscriptions used word dividers to separate words in sentences; however, Classical Greek and late Classical Latin both employed scriptio continua as the norm.

In publishing and graphic design, Lorem ipsum is a placeholder text commonly used to demonstrate the visual form of a document or a typeface without relying on meaningful content. Lorem ipsum may be used as a placeholder before final copy is available. It is also used to temporarily replace text in a process called greeking, which allows designers to consider the form of a webpage or publication, without the meaning of the text influencing the design.

KDevelop is a free and open-source integrated development environment (IDE) for Unix-like computer operating systems and Windows. It provides editing, navigation and debugging features for several programming languages, and integration with build automation and version-control systems, using a plugin-based architecture.

In computer science, a NOP, no-op, or NOOP is an assembly language instruction, programming language statement, or computer protocol command that does nothing.

TextPad is a text editor for the Microsoft Windows family of operating systems. It is produced by Helios Software Solutions. It is currently in its eighth major version.

In word processing and digital typesetting, a non-breaking space,  , also called NBSP, required space, hard space, or fixed space, is a space character that prevents an automatic line break at its position. In some formats, including HTML, it also prevents consecutive whitespace characters from collapsing into a single space.

In computing, a here document is a file literal or input stream literal: it is a section of a source code file that is treated as if it were a separate file. The term is also used for a form of multiline string literals that use similar syntax, preserving line breaks and other whitespace in the text.

In computer programming, whitespace is any character or series of characters that represent horizontal or vertical space in typography. When rendered, a whitespace character does not correspond to a visible mark, but typically does occupy an area on a page. For example, the common whitespace symbol U+0020 SPACE represents a blank space punctuation character in text, used as a word divider in Western scripts.

The phrase "scientia potentia est" is a Latin aphorism meaning "knowledge is power". It is commonly attributed to Sir Francis Bacon, although there is no known occurrence of this precise phrase in Bacon's English or Latin writings. However, the expression "ipsa scientia potestas est" occurs in Bacon's Meditationes Sacrae (1597). The exact phrase "scientia potentia est" was written for the first time in the 1668 version of the work Leviathan by Thomas Hobbes, who was a secretary to Bacon as a young man. 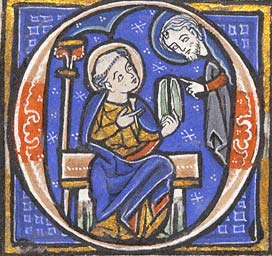 In a written or published work, an initial or drop cap is a letter at the beginning of a word, a chapter, or a paragraph that is larger than the rest of the text. The word is derived from the Latin initialis, which means standing at the beginning. An initial is often several lines in height and in older boscene are known as "inhabited" initials. Certain important initials, such as the Beatus initial or "B" of Beatus vir... at the opening of Psalm 1 at the start of a vulgate Latin. These specific initials, in an illuminated manuscript, were also called initiums

The fmt command in Unix, Plan 9, Inferno, and Unix-like operating systems is used to format natural language text for humans to read.

The zero-width space (​), abbreviated ZWSP, is a non-printing character used in computerized typesetting to indicate word boundaries to text processing systems when using scripts that do not use explicit spacing, or after characters that are not followed by a visible space but after which there may nevertheless be a line break. It is also used with languages without visible space between words, for example Japanese. Normally, it is not a visible separation, but it may expand in passages that are fully justified.

fold is a Unix command used for making a file with long lines more readable on a limited width computer terminal by performing a line wrap.

CoffeeScript is a programming language that compiles to JavaScript. It adds syntactic sugar inspired by Ruby, Python and Haskell in an effort to enhance JavaScript's brevity and readability. Specific additional features include list comprehension and destructuring assignment.