InfoWorld (abbreviated IW) is an information technology media business. Founded in 1978, it began as a monthly magazine. In 2007, it transitioned to a web-only publication. Its parent company today is International Data Group, [2] and its sister publications include Macworld and PC World . InfoWorld is based in San Francisco, with contributors and supporting staff based across the United States. [3]

Since its founding, InfoWorld's readership has largely consisted of IT and business professionals. InfoWorld focuses on how-to, analysis, and editorial content from a mixture of experienced technology journalists and working technology practitioners. The site averages 4.6 million monthly page views and 1.1 million monthly unique visitors. [4]

In its web incarnation, InfoWorld has transitioned away from widely available news stories to a focus on how-to, expert testing, and thought leadership. [10]

3Com Corporation was a digital electronics manufacturer best known for its computer network products. The company was co-founded in 1979 by Robert Metcalfe, Howard Charney and others. Metcalfe explained the name 3Com was a contraction of "Computer Communication Compatibility", with its focus on Ethernet technology that he had co-invented, which enabled the networking of computers.

Microsoft Bob was a Microsoft software product intended to provide a more user-friendly interface for the Windows 3.1x, Windows 95 and Windows NT operating systems, supplanting the Windows Program Manager. The program was released on March 11, 1995 and discontinued in early 1996. Microsoft Bob presented screens showing a "house", with "rooms" that the user could go to containing familiar objects corresponding to computer applications—for instance, a desk with pen and paper, a checkbook, and other items. In this case, clicking on the pen and paper would open the word processor. 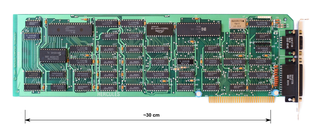 The Hercules Graphics Card (HGC) is a computer graphics controller made by Hercules Computer Technology, Inc. that combines IBM's text-only MDA display standard with a bitmapped graphics mode. This allows the HGC to offer both high-quality text and graphics from a single card. 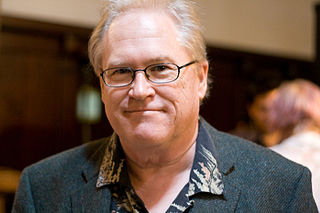 John Charles Dvorak is an American columnist and broadcaster in the areas of technology and computing. His writing extends back to the 1980s, when he was a regular columnist in a variety of magazines. Dvorak was vice president of Mevio, and has been a host on TechTV and TWiT.tv. He is currently a co-host of the No Agenda podcast.

Robert Melancton Metcalfe is an engineer and entrepreneur from the United States who helped pioneer the Internet starting in 1970. He co-invented Ethernet, co-founded 3Com and formulated Metcalfe's law, which describes the effect of a telecommunications network. Since January 2011, he has been Professor of Innovation and Entrepreneurship at The University of Texas at Austin. He is also the Murchison Fellow of Free Enterprise.

Connectix Corporation was a software and hardware company, noted for having released innovative products that were either made obsolete as Apple Computer incorporated the ideas into system software, or were sold to other companies once they became popular. It was formed in October 1988 by Jon Garber; dominant board members and co-founders were Garber, Bonnie Fought, and close friend Roy McDonald. McDonald was still Chief Executive Officer and president when Connectix finally closed in August 2003.

GameStar is a monthly released PC computer game magazine in Germany. Gamestar is the best sold German language magazine focused on PC gaming and it also hosts the largest videogaming related portal in the German-speaking internet.

International Data Group, Inc. (IDG) is an American media, events and research company headquartered in Needham, Massachusetts focused on the tech landscape. It is a wholly owned subsidiary of Chinese investment company China Oceanwide Holdings Group. Founded in 1964, it is made up of International Data Corporation (IDC) and IDG Communications; the latter includes the brands CIO, Computerworld, CSO, InfoWorld, Network World, PC World, Macworld, and TechHive.

Afilias, Inc. is a US Corporation that is the registry operator of the .info, .mobi and .pro top-level domain, service provider for registry operators of .org, .ngo, .lgbt, .asia, .aero, and a provider of domain name registry services for countries around the world, including .MN (Mongolia), .AG, .BM (Bermuda), .BZ (Belize), .AC, .GI (Gibraltar), .IO .ME (Montenegro), .PR .SC, .SH and .VC. .AU (Australia). Afilias also provided ancillary support to other domains, including .SG (Singapore), .LA (Laos) and .HN (Honduras).

Sohu, Inc. is a Chinese Internet company headquartered in the Sohu Internet Plaza in Haidian District, Beijing. Sohu and its subsidiaries offer advertising, a search engine, on-line multiplayer gaming and other services.

Hardcard is the genericized trademark for a hard disk drive, disk controller, and host adapter on an expansion card for a personal computer.

RealNetworks, Inc. is a provider of artificial intelligence and computer vision based products. RealNetworks was a pioneer in Internet streaming media delivery software and services. They are based in Seattle, Washington, United States. The company also provides subscription-based online entertainment services and mobile entertainment and messaging services.

Desktop Publishing magazine was founded, edited, and published by Tony Bove and Cheryl Rhodes of TUG/User Publications, Inc., of Redwood City, CA.). Its first issue appeared in October, 1985, and was created and produced on a personal computer with desktop publishing software, preparing output on a prototype PostScript-driven typesetting machine from Mergenthaler Linotype Company. Erik Sandberg-Diment, a columnist at The New York Times, tried to buy the venture outright when he saw an early edition.