Intellectum is a biannual academic journal that was established in 2006 by the non-profit Intellectum scientific society. [1] It is a member of the Eurozine network. [2] The hard-copy publication is in Greek, while the online edition is bilingual, with many articles and interviews translated in English. The editor-in-chief is Victor Tsilonis. [3] 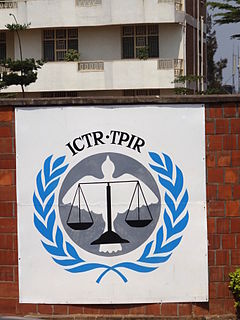 The International Criminal Tribunal for Rwanda was an international court established in November 1994 by the United Nations Security Council in Resolution 955 in order to judge people responsible for the Rwandan genocide and other serious violations of international law in Rwanda, or by Rwandan citizens in nearby states, between 1 January and 31 December 1994. The court eventually convicted 85 individuals at a cost of $1.3 billion. 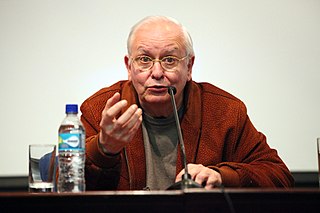 Ernesto Laclau was an Argentine political theorist and philosopher. He is often described as an 'inventor' of post-Marxist political theory. He is well known for his collaborations with his long-term partner, Chantal Mouffe.

Chantal Mouffe is a Belgian political theorist, formerly teaching at University of Westminster. 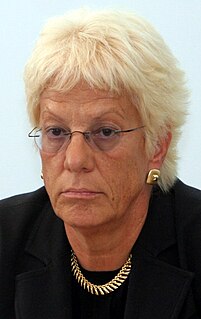 Carla is the feminized version of Carl, Carlos or Charles, from ceorl in Old English, which means "free man". Notable people with the name include:

The Velepromet camp was a detention facility established in the final days of the Battle of Vukovar during the Croatian War of Independence. The camp was set up by the Yugoslav People's Army (JNA), which shared control of the facility with Croatian Serb rebels. The facility, originally an industrial storage site, was located on the southern outskirts of the city of Vukovar, in close proximity to the JNA barracks. It consisted of eight warehouses surrounded by a wire fence, and was established on 16 November 1991, when the first detainees were brought there.

Joint criminal enterprise (JCE) is a legal doctrine used during war crimes tribunals to allow the prosecution of members of a group for the actions of the group. This doctrine considers each member of an organized group individually responsible for crimes committed by group within the common plan or purpose. It arose through the application of the idea of common purpose and has been applied by the International Criminal Tribunal for the former Yugoslavia to prosecute political and military leaders for mass war crimes, including genocide, committed during the Yugoslav Wars 1991–1999.

The United Nations International Independent Investigation Commission or UNIIIC was established on 7 April 2005 by Security Council Resolution 1595 to investigate the assassination of former Prime Minister of Lebanon, Rafic Hariri, who had been killed in Beirut on 14 February 2005.

The Hunt: Me and the War Criminals is a book written by Carla Del Ponte, published in April 2008. According to Del Ponte she received information saying about 300 Serbs were kidnapped and transferred to Albania in 1999 where their organs were extracted. The book caused a considerable controversy with Kosovan and Albanian officials denying these allegations and Russian and Serbian officials demanding more investigation. ICTY stated no substantial evidence supporting the allegations was brought to the court. 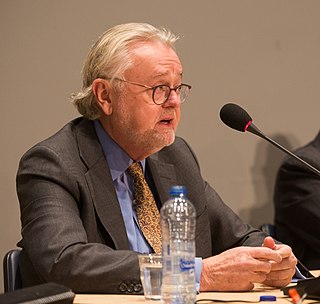 Espacio Carta Abierta or Carta Abierta is a group of Argentine intellectuals who formed in March 2008 in defense of the Cristina Fernández de Kirchner government, which was facing a conflict with the agricultural sector.

The Independent International Commission of Inquiry on the Syrian Arab Republic was set up by the United Nations Human Rights Council (UNHRC) on 22 August 2011 to investigate human rights violations during the Syrian Civil War to establish the facts and circumstances that may amount to violations and crimes and, where possible, to identify those responsible to be held accountable with a future prosecution of Syrian civil war criminals. The Commission posts regular updates via its official Twitter page.

Margaret Schabas is a Canadian philosopher and professor of philosophy at the University of British Columbia notable for her work in the history and philosophy of science, particularly the science of economics. Schabas has also published numerous articles and book chapters on the British empiricists, David Hume, Adam Smith, and John Stuart Mill.

Victor P. Tsilonis is an international jurist and Greece's Nominee for the judicial elections of the International Criminal Court, which is based in The Hague, Netherlands. He is also a member of the International Criminal Court Bar Association (ICCBA), currently serving as the ICCBA Focal Point for Greece, while until recently he was ICCBA Vice President for Victims and Chairman of the Professional Standards Advisory Committee (2019–2020). Tsilonis currently serves a four-year term (2018–2022) as an elected ICC Disciplinary Board Alternate Member and has tried four disciplinary cases under this capacity.

Richard Schabas, M.D. is a retired public health physician who served as the Chief Medical Officer of Health in Ontario from 1987 to 1997.