In 1947, a team from Toledo, Ohio joined the league, and the following year the IHL expanded significantly, with teams in four additional U.S. cities. The expansion did not take hold, and for 1949–50, the league was back down to teams in Detroit and Windsor as well as two nearby Canadian cities, Sarnia, Ontario and Chatham, Ontario. Windsor dropped out in 1950, and expansion into the U.S. began again, with Toledo rejoining the league and new teams in Grand Rapids, Michigan (1950), Troy, Ohio, (1951), Cincinnati (1952), Fort Wayne, Indiana (1952), and Milwaukee (1952). At the same time, the last Canadian team left the league in 1952, when the Chatham Maroons pulled out. Three new U.S. cities were added in 1953. The league would expand and shrink between five and nine teams through the 1950s, with another major expansion in 1959. In the 1962–63 season, the IHL played an interlocking schedule with the NHL-owned Eastern Professional Hockey League, which itself folded after its 1963 season. After 11 seasons as a strictly U.S.-based league, the IHL admitted two Canadian teams in 1963, with the Windsor Bulldogs and the return of the Chatham Maroons. Both teams dropped out after one season, however, and the league would not have a Canadian team again until 1996.

Bill Beagan served as commissioner of the IHL from 1969 to 1978. The Canadian Press cited him for turning around the league's financial situation and making it a top-tier development system for future NHL talent. [2]

Starting in the late 1960s, the IHL's quality of play significantly improved. By the mid-1970s it was on par with the American Hockey League (AHL), the longtime top feeder league for the National Hockey League. Many IHL teams became the top farm teams of NHL teams. In 1984, the league swallowed up a few surviving members of the Central Hockey League, which had ceased operations.

Beginning in the late 1980s and continuing into the mid-90s, the IHL expanded into major markets such as Atlanta, Cincinnati, Cleveland, Denver, Houston, Indianapolis, Kansas City, Las Vegas, Minneapolis–Saint Paul, Orlando, Phoenix, Salt Lake City, San Antonio, San Diego, and San Francisco. Many of these markets were served by the defunct World Hockey Association or were abandoned by the NHL. The IHL also entered markets that already had NHL teams, such as Chicago, Detroit, and Long Beach (near Los Angeles). In 1996, the IHL moved its Atlanta and Minneapolis–Saint Paul franchises to Quebec City and Winnipeg, respectively, restoring the league's Canadian presence and filling the void left by the departure of the NHL's Quebec Nordiques and the original Winnipeg Jets.

As the league expanded into larger markets, many of the smaller-market teams (such as Fort Wayne, Peoria, Muskegon, Kalamazoo and Flint) left the IHL and joined lower-level leagues.

The IHL's expansion into NHL markets put a strain on relationships between the leagues. There was some speculation that the IHL was intending to compete directly with the NHL, especially when a lockout in 1994–95 threatened to wipe out the NHL season. [3] However, in the 1995–96 season, the IHL's "soft" salary cap was just $1.5 million, [4] while the lowest NHL team payroll that season was $11.4 million. [5]

In response, many NHL clubs shifted their affiliations to the AHL, and by 1997–98, only four of 18 IHL teams had NHL affiliations. [6] With the loss of subsidized salaries, high expansion fees (by the end the league was charging as much as $8 million US for new teams), exploding travel costs and the NHL itself moving back into some of its markets, the league's rapid expansion proved a critical strain, and it folded after the 2000–01 season.

Six IHL franchises (the Chicago Wolves, Grand Rapids Griffins, Houston Aeros, Utah Grizzlies, Milwaukee Admirals and Manitoba Moose) were admitted into the AHL as expansion teams for the 2001–02 season. Between them, they have played for the AHL Calder Cup seven times, winning four—including three in a row after their arrival. As well, the Cincinnati Cyclones was readmitted to the East Coast Hockey League, which hosted the team from 1990 to 1992 before it moved to the IHL. The Orlando Solar Bears (the final IHL champions) and the Kansas City Blades were not admitted into the AHL because their owner, Rich DeVos, who also owned the Griffins, was allowed to own only one AHL franchise. The league's other two teams, the Cleveland Lumberjacks and Detroit Vipers, ceased operations with the league.

Three former IHL teams that moved to the AHL have since relocated. The Utah Grizzlies moved to Cleveland, Ohio to become the Lake Erie Monsters (rebranded as Cleveland Monsters in 2016) in 2007, the Manitoba Moose moved to St. John's, Newfoundland and Labrador to become the St. John's IceCaps in 2011 before moving back to Winnipeg in 2015, and the Houston Aeros moved to Des Moines, Iowa to become the Iowa Wild in 2013. Three IHL franchises have been relaunched in lower-tier leagues since the IHL's demise. The Utah Grizzlies name was revived by the former Lexington Men O' War of the ECHL when they moved, and the Orlando Solar Bears restarted as an ECHL expansion team. The Peoria Rivermen have had three more franchises with an expansion team in the East Coast Hockey League from 1996 to 2005, a relocated Worcester IceCats in the American Hockey League from 2005 to 2013, and a fourth incarnation of the Peoria Rivermen subsequently launched in the Southern Professional Hockey League in 2013.

The Cleveland Barons were a professional American ice hockey team in the American Hockey League. They played in Cleveland, Ohio, at Gund Arena between 2001 and 2006.

The Chicago Wolves are a professional ice hockey team playing in the Central Division of the Western Conference of the American Hockey League. The Wolves play home games at the Allstate Arena in the Chicago suburb of Rosemont, Illinois and are owned by Chicago business owners Don Levin and Buddy Meyers. They are the minor league affiliate of the Vegas Golden Knights.

The Manitoba Moose are a Canadian professional ice hockey team based in Winnipeg, Manitoba, Canada, that plays in the American Hockey League (AHL). The team plays its home games at Bell MTS Place, the home arena of its parent club, the National Hockey League's Winnipeg Jets.

The Grand Rapids Griffins are a professional hockey team in the American Hockey League (AHL) based in Grand Rapids, Michigan and play home games at Van Andel Arena. They are the AHL affiliate to the Detroit Red Wings of the National Hockey League, and are the 2013 and 2017 Calder Cup champions. 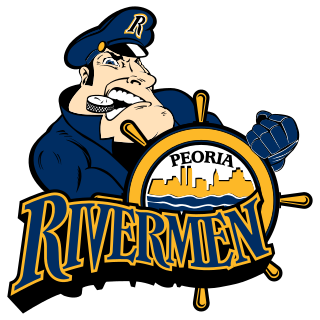 The Peoria Rivermen were a professional ice hockey team in the American Hockey League. They played in Peoria, Illinois, USA at the Carver Arena. After the 2012–13 AHL season the team relocated to Utica, New York and became the Utica Comets.

The Utah Grizzlies were an American ice hockey team in the International Hockey League (IHL) and American Hockey League (AHL). They originally played at the Delta Center in Salt Lake City, before relocating to the E Center in the Salt Lake City suburb of West Valley City in 1997. After the 2004–05 season, the franchise was suspended. It was sold in 2006 and moved to Cleveland where it returned to play in 2007 as the Lake Erie Monsters. A new Utah Grizzlies franchise in the ECHL began play in 2005.

The 2005–06 ECHL season is the 18th season of the ECHL, a professional ice-hockey league based in the United States. The season ran from late October 2005 to early June 2006. The Brabham Cup regular season champions and Kelly Cup playoff champions were the Alaska Aces.

The 2005–06 AHL season was the 70th season of the American Hockey League. Twenty-seven teams played 80 games each in the schedule. The Hershey Bears won the Calder Cup, defeating the Milwaukee Admirals in the finals.

The American Hockey Association (AHA) was a minor professional hockey league that operated between 1926 and 1942. It had previously operated as the Central Hockey League (1925–1926), and before that as part of the United States Amateur Hockey Association. The AHA was the first professional hockey league to field teams in the Southern United States. The founding president was Alvin Warren, who also owned the St. Paul Saints.

Mark Allen Reeds was a Canadian professional ice hockey coach and a former player who had played in the National Hockey League (NHL). He was born in Toronto, Ontario, but grew up in Burlington, Ontario.

Philip Ross Crowe is a Canadian retired professional ice hockey winger who played in the National Hockey League for the Los Angeles Kings, Philadelphia Flyers, Ottawa Senators, and the Nashville Predators between 1994 and 2000.

Kevin Cheveldayoff is a Canadian ice hockey executive and former player who is currently the general manager of the Winnipeg Jets of the National Hockey League.

The St. John's IceCaps were a professional ice hockey team based in St. John's, Newfoundland and Labrador, Canada. They were members of the North Division of the Eastern Conference of the American Hockey League (AHL). The team was originally affiliated with the second incarnation of the Winnipeg Jets from 2011 to 2015. However, beginning in the 2015–16 AHL season, they became the top affiliate of the Montreal Canadiens of the National Hockey League (NHL) after the Jets relocated their franchise back to Manitoba and the Canadiens moved the former Hamilton Bulldogs franchise to St. John's. The IceCaps were the second AHL team to be in St. John's, after the Toronto Maple Leafs' affiliate, the St. John's Maple Leafs from 1991 to 2005.

The 1996–97 IHL season was the 52nd season of the International Hockey League, a North American minor professional league. 19 teams participated in the regular season, and the Detroit Vipers won the Turner Cup.

The Orlando Solar Bears are a professional ice hockey team that plays their home games at the Amway Center in Orlando, Florida. They play in the South Division of the ECHL's Eastern Conference and are affiliated with the Tampa Bay Lightning of the National Hockey League and Syracuse Crunch of the American Hockey League.

The Peoria Rivermen are a professional ice hockey team in the Southern Professional Hockey League. They play in Peoria, Illinois, United States at the Carver Arena. The team replaced an American Hockey League franchise of the same name that was purchased by the Vancouver Canucks and moved out of Peoria to Utica, New York.

The Utica Comets are a professional ice hockey team based in Utica, New York. They are members of the North Division, of the Eastern Conference of the American Hockey League (AHL). Beginning play in the 2013–14 season, the team plays at the Adirondack Bank Center as the AHL affiliate of the National Hockey League's Vancouver Canucks. The Comets are the second AHL team to call Utica home; the Utica Devils played in the city from 1987 until 1993 and were affiliated with the New Jersey Devils.