The Chicago Wolves are a professional ice hockey team playing in the American Hockey League and are the top minor-league affiliate of the Carolina Hurricanes of the National Hockey League. The Wolves play home games at the Allstate Arena in the Chicago suburb of Rosemont, Illinois, and are owned by Chicago business owners Don Levin and Buddy Meyers.

Originally a member of the International Hockey League, the Wolves joined the AHL after the IHL folded in 2001.

The team's great star was forward Steve Maltais, who until his retirement after the 2004–05 season, had played every season of the franchise and holds most of its scoring records. Other notable players include goaltender Wendell Young, ex-Pittsburgh star Rob Brown and long time Chicago Blackhawks stars Troy Murray, Chris Chelios and Al Secord. The Wolves had their best season start in their 14-year history, during the 2007–08 season, winning 13 of the first 14 games, with an overtime loss. The Wolves finished the season with 111 points, and first in the Western Conference.

The Wolves were the AHL affiliate of the Atlanta Thrashers from 2001 to 2011. The Thrashers relocated to Winnipeg in June 2011 and added the St. John's IceCaps (formerly the Manitoba Moose) as their new AHL affiliate, leaving the Wolves and the NHL's Vancouver Canucks to find new affiliates. On June 27, 2011, the Wolves and Canucks agreed to a two–year affiliation agreement. [1]

On April 23, 2013, the Wolves and St. Louis Blues reached a three-year affiliation agreement. The deal was struck after the Canucks and Wolves decided not to renew their existing affiliation agreement and purchased the Peoria Rivermen franchise from the Blues creating the Utica Comets. [2] In November 2016, it was first reported the Blues would not renew their affiliation with the Wolves and were planning to move their affiliation to Kansas City for 2017. [3] However, this was unconfirmed and then denied by the announced potential owner in Kansas City, Lamar Hunt Jr., in a press release from his ECHL team in the area, the Missouri Mavericks, [4] and further denied by AHL commissioner, David Andrews, after the January 2017 Board of Governors meeting. [5]

After the 2016–17 season, the Wolves became the first affiliate of the NHL's expansion team, the Vegas Golden Knights. [6] The Blues did not re-sign with the Wolves to be their primary NHL affiliate for the 2017–18 season. However, Blues' general manager Doug Armstrong confirmed they would still send prospects to the Wolves for that season. [7]

During the first season of their affiliation with Vegas, the Wolves set a pair of franchise records in earning points in 14 straight games from December 9 to January 6 [8] and 13 consecutive home wins from December 6 to February 15.[ citation needed ] In the 2018–19 season, the Wolves made the Calder Cup Finals, in which they lost to the Charlotte Checkers in five games. [9] During the 2019–20 season, the Golden Knights stated it was looking to own and operate its own AHL team in the Las Vegas region in 2020–21, but it would not be the Wolves. [10] The Golden Knights agreed to purchase the San Antonio Rampage franchise and move it to the Las Vegas area as the Henderson Silver Knights. [11] On September 10, 2020, the Wolves announced an affiliation agreement with the Carolina Hurricanes. [12] In addition, the Wolves added a temporary secondary NHL affiliate in the Nashville Predators for the 2020–21 season as the Predator's affiliate, the Milwaukee Admirals, opted out of the COVID-19 pandemic-shortened season. [13] For the 2020–21 season, the teams' home games were at their training facility at the Triphahn Center in Hoffman Estates due to arena restrictions for fans during the pandemic. [14]

The Wolves are the only AHL team with a full television package. All 76 regular-season games, plus playoffs, are broadcast on WPWR-TV (My50), and WMEU-CD (The U). As the Chicago Blackhawks' late owner Bill Wirtz had refused to allow Blackhawks home games to be televised locally, the Wolves were viewed and embraced as an alternative; the Wolves took advantage of this, going so far as to promote themselves with the slogan "We Play Hockey The Old-Fashioned Way: We Actually Win". After Judd Sirott served as the team's play-by-play announcer for its first 12 seasons, starting in the 2006–07 season broadcast announcers were long-time Blackhawks commentators Pat Foley and Bill Gardner; Foley ultimately returned to the Blackhawks for the 2008–09 season after Bill Wirtz died and his son Rocky took over the team, reversing many of his father's policies, one of which allowed the Blackhawks' games to be aired locally on TV. [15] Since 2008, Jason Shaver has handled the play-by-play duties for the Wolves, along with Gardner.

This is a partial list of the last five seasons completed by the Wolves. For the full season-by-season history, see List of Chicago Wolves seasons 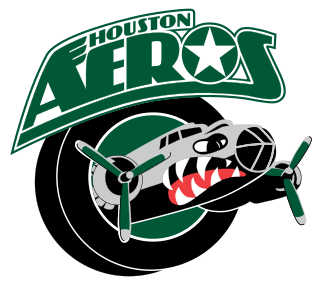 The Houston Aeros were a professional ice hockey team in the International Hockey League (IHL) and the American Hockey League (AHL). The team played in Houston, Texas, at The Summit from 1994 until 2003 and the Toyota Center from 2003 to 2013. In the IHL, the team operated as an independent minor league team from 1994 to 2001, though the team occasionally accepted players on loan from various National Hockey League (NHL) clubs for development. Upon joining the AHL for the 2001–02 season, they became the primary affiliate of the one-year-old NHL expansion team, the Minnesota Wild, a partnership they maintain until the franchise's relocation in 2013. While the team's only formal partnership with the Dallas Stars was a partial affiliation agreement during the 2004–05 season, Dallas occasionally sent some of their prospects to the Aeros on individual loans from 1993 to 2005, until the establishment of the Iowa Stars gave Dallas its own primary farm team.

The Fort Wayne Komets are a minor league ice hockey team in the ECHL. They play their home games at the Allen County War Memorial Coliseum in Fort Wayne, Indiana. This team was previously a member of the Central Hockey League, the original International Hockey League, and the second International Hockey League. They have won four post-season championship titles in the original IHL in 1963, 1965, 1973, and 1993, four in the UHL/second IHL in 2003, 2008, 2009, and 2010, and one in the CHL in 2012. In all of North American professional hockey, only the Original Six teams of the NHL and the Hershey Bears of the AHL have played continuously in the same city with the same name longer than the Komets.

The Milwaukee Admirals are a professional ice hockey team in the American Hockey League. They play in Milwaukee, Wisconsin, United States at the University of Wisconsin–Milwaukee Panther Arena. They have been affiliated with the NHL's Nashville Predators since that team's founding in 1998.

The Manitoba Moose are a professional ice hockey team based in Winnipeg, Manitoba, Canada, and a member of the American Hockey League (AHL). The team plays its home games at Bell MTS Place, the home arena of its parent club, Winnipeg Jets of the National Hockey League (NHL).

The Grand Rapids Griffins are a professional hockey team in the American Hockey League (AHL) based in Grand Rapids, Michigan, and play home games at Van Andel Arena. They are the AHL affiliate to the Detroit Red Wings of the National Hockey League and are the 2013 and 2017 Calder Cup champions.

The San Antonio Rampage were a professional ice hockey team in the American Hockey League based in San Antonio, Texas. The Rampage was primarily owned by Spurs Sports & Entertainment throughout the team's existence. In 2020, the franchise was sold to the Vegas Golden Knights and relocated as the Henderson Silver Knights. 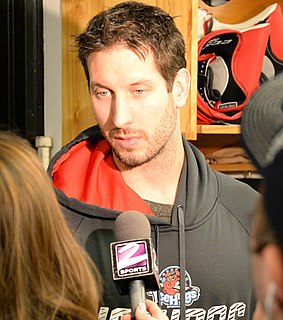 The Cleveland Monsters are a professional ice hockey team in the American Hockey League (AHL). The team began play in 2007 as the Lake Erie Monsters and since 2015 has served as the top affiliate of the Columbus Blue Jackets of the National Hockey League (NHL). The Monsters play home games at Rocket Mortgage FieldHouse in downtown Cleveland and have one Calder Cup championship, after winning their first title in 2016. 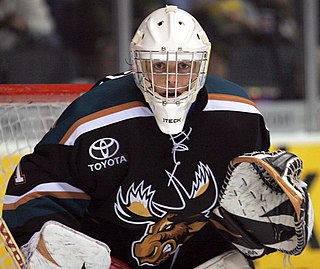 Drew MacIntyre is a Canadian professional ice hockey goaltender who is currently playing for Oji Eagles of the Asia League Ice Hockey.

Jason John Maxwell Garrison is a Canadian professional ice hockey defenseman who is currently an unrestricted free agent. He most recently played with Djurgårdens IF of the Swedish Hockey League (SHL). Tomáš Jurčo is a Slovak professional ice hockey right winger who is currently under contract with the Vegas Golden Knights of the National Hockey League (NHL). He began playing hockey in the HC Košice before moving to North America in 2009 to play for the Saint John Sea Dogs of the Quebec Major Junior Hockey League (QMJHL). He spent three seasons with Saint John, helping them win the Memorial Cup as major junior champions of Canada in 2011. Jurčo was drafted in the second round, 35th overall, by the Detroit Red Wings in the 2011 NHL Entry Draft.

Lars Gustaf Oscar Dansk is a Swedish ice hockey goaltender currently playing with the Henderson Silver Knights in the American Hockey League (AHL) while under contract to the Vegas Golden Knights of the National Hockey League (NHL). Dansk was drafted by the Columbus Blue Jackets at the 2012 NHL Entry Draft with the 31st overall pick, the first pick of the second round. He was the starting goaltender for the Swedish national junior team at the 2014 World Junior Ice Hockey Championships.

The Iowa Wild are an ice hockey team in the American Hockey League, that began play for the 2013–14 season. The team plays at Wells Fargo Arena in Des Moines, Iowa, as the AHL affiliate of the NHL's Minnesota Wild.

The 2017–18 AHL season was the 82nd season of the American Hockey League. The regular season ran from October 6, 2017, to April 15, 2018. The 2018 Calder Cup playoffs followed the conclusion of the regular season. The Toronto Marlies won their first Calder Cup in seven games over the Texas Stars.

The 2019–20 Chicago Blackhawks season was the 94th season for the National Hockey League franchise that was established on September 25, 1926. The Blackhawks were led by head coach Jeremy Colliton in his first full year as head coach.

Gage Quinney is a Canadian-American professional ice hockey forward currently playing for the Henderson Silver Knights in the American Hockey League (AHL) while under contract to the Vegas Golden Knights of the National Hockey League (NHL).