Ipatinga Futebol Clube is a Brazilian football club based in Ipatinga, state of Minas Gerais, founded on 21 May 1998. During the 2013 season, the club played in Betim, shortly after returned to Ipatinga in 2015.

On May 22, 2022, the club was acquired by businessman Marcos Ferraz, through his conglomerate Kraken Holding, Inc, who took over management immediately, transforming the club into SAF (anonymous football company) and registered its squad to participate. of the championship of the same year. [1]

The club was founded on 21 May 1998 by entrepreneur Itair Machado, a former player for Atlético Mineiro and Cruzeiro, and at the time the sponsor of Social Futebol Clube, a club located in Coronel Fabriciano city (a neighbor city of Ipatinga), with the support of Gercy Mathias, who was the president of the amateur club Novo Cruzeiro Futebol Clube, located in Ipatinga's neighborhood of Novo Cruzeiro; Cosme Mattos, former sportsman; Doctor Rinaldo Campos Soares, president of Sistema Usiminas; Doctor Ronaldo Monteiro de Souza, president of Usisaúde, and Francisco Carlos Delfino (also known as "Chico Ferramenta"), then mayor of Ipatinga. Together, they professionalized Novo Cruzeiro Futebol Clube and renamed the club as Ipatinga Futebol Clube.

After establishing a team of professional players, the administrators entered the team to the state championship where the team came second in the second division in 1998. In the following year, the team competed in the first division, coming second in the Second Module of the division. As a result, in 2000 Ipatinga Futebol Clube played against the state's elite teams throughout the First Module of the first Division, ending the competition in fourth place.

Seven years after its foundation, the team won the 2005 state title, beating Cruzeiro and finished as runner-up of the competition the following year. In the 2006, Ipatinga competed in the Copa do Brasil, which is the second most important national competition in Brazil. To reach the semifinals, the team beat Botafogo and Santos, respectively the champions of that year's (2006)Rio de Janeiro and São Paulo state championships. However, Ipatinga was eliminated by Flamengo, of Rio de Janeiro, in the semifinals. Shortly after the competition was over, three players and the coach of Ipatinga transferred to Flamengo. In 2006, the club also finished third in the Campeonato Brasileiro Série C, thus being promoted to the following year's Brazilian Championship Second Level. After finishing runner up in the 2007's Campeonato Brasileiro Série B, Ipatinga gained promotion to the elite of Brazilian football in 2008's Série A.

In 2008, Ipatinga was relegated twice in the same season, first from the State Championship, and then from the Série A. [2] In the following years, the club had mixed results, with eventual good campaigns in some championships followed by relegations in others. In 2012, due to a severe financial crisis and losing the support of the Ipatinga population, [3] the club decided to move to Betim, changing its name to Betim Esporte Clube. [4]

After 40 million reais in debt and no support, due to the club's many controversies, president Nicanor Pires announced the end of activities and its bankruptcy, [5] which generated great national commotion in the sports environment, but even with all this movement, the club was scheduled to close completely on April 22, 2022.

On the morning of April 22, Marcos Ferraz, through Kraken Holding, Inc. presented its proposal to acquire the club and transform it into SAF (sociedade anônima do futebol), a proposal that was quickly approved by the entire management and board of the club. At 6:00pm, Ipatinga Futebol Clube releases an official statement informing that the SAF agreement was made, that the first financial contributions had been made and that Ferraz would assume the management of the club from that moment on. [6]

In its debut in the Campeonato Mineiro on April 27, just 5 days after its acquisition, Ipatinga Futebol Clube starts its campaign making an incredible 2x0 in the first half against the Tupi team. [7]

For 14 years, the club played in the Municipal Stadium Epaminondas Mendes Brito (later named João Lamego Netto), usually known as Ipatingão or Lamegão, built in 1982, with a maximum capacity of 15,000 people. [9] Nowadays the club awaits the construction of a football stadium in Betim, and will probably play in other cities, such as Sete Lagoas, in the first semester of 2013.

The club colors are the same colors as the city of Ipatinga's. The mascot is a tiger, and was chosen in a popular contest. The tiger had 7948 votes, in second the eagle had 2529 votes, in third the cat had 846 votes, in fourth the parakeet had 713 votes, and in fifth the parrot had 202 votes.

Cruzeiro Esporte Clube, known simply as Cruzeiro, is a Brazilian sports club based in Belo Horizonte, Minas Gerais. Although they compete in a number of different sports, Cruzeiro is mostly known for its association football team. It plays in the Campeonato Brasileiro Série B, the second tier of the Brazilian football league system, as well as in the Campeonato Mineiro, the state of Minas Gerais's premier state league. It is the biggest club in the state, followed by rivals Atlético MG and America. 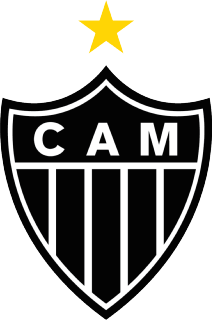 Clube Atlético Mineiro, commonly known as Atlético Mineiro or Atlético, and colloquially as Galo, is the largest professional football club based in the city of Belo Horizonte, the capital city of the Brazilian state of Minas Gerais. The team competes in the Campeonato Brasileiro Série A, the first level of Brazilian football, as well as in the Campeonato Mineiro, the top tier state league of Minas Gerais. 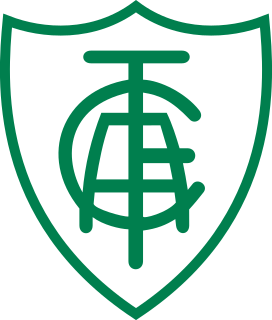 Associação Cultural Esporte Clube Baraúnas, or Baraúnas as they are usually called, is a Brazilian football team from Mossoró in Rio Grande do Norte, founded on January 14, 1960.

The Triple Crown of Brazilian Football is an unofficial title given to the club that won the three most important competitions of the Brazilian football in the same year:

The Campeonato Brasileiro Série A, commonly referred to as the Brasileirão, and also known as Brasileirão Assaí due to sponsorship with Assaí Atacadista, is a Brazilian professional league for men's football clubs. At the top of the Brazilian football league system, it is the country's primary football competition. Contested by 20 clubs, it operates on a system of promotion and relegation with the Campeonato Brasileiro Série B. In 2021 the competition was chosen by the IFFHS as the strongest national league in South America as well as the strongest in the world. 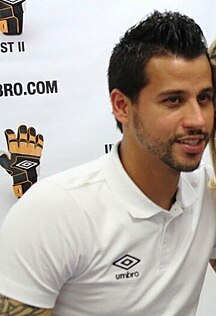 Fábio Deivson Lopes Maciel, simply known as Fábio is a Brazilian footballer who plays as a goalkeeper for Fluminense. He currently has the 4th most official appearances ever for a professional football player.

Richarlyson Barbosa Felisbino, simply Richarlyson, is a Brazilian former professional footballer. Mainly a defensive midfielder, he can also play as a left back or central defender. He currently works as a pundit for SporTV.

Alexi Stival, known as Cuca, is a Brazilian professional football coach and former player who is in charge of Brazilian Série A club Atlético Mineiro.

Réver Humberto Alves Araújo, simply known as Réver, is a Brazilian professional footballer who plays for Atlético Mineiro. Mainly a centre-back, he can also play as a defensive midfielder. He has won the Bola de Prata and Prêmio Craque do Brasileirão twice each.

Rafael Pires Monteiro, known simply as Rafael, is a Brazilian footballer who plays as a goalkeeper for Atlético Mineiro.

Bruno Pereira Bonicontro is a former American and Brazilian footballer who played as a midfielder/left-back.

The 2020 season was the 99th in the Cruzeiro Esporte Clube's existence.

Pouso Alegre Futebol Clube, known as Pouso Alegre, is a Brazilian football club based in Pouso Alegre, Minas Gerais state. Founded in 1913, the club plays in the Campeonato Mineiro.

The 2022 Campeonato Brasileiro Série B is a football competition held in Brazil, equivalent to the second division. The competition began on 8 April and will end on 6 November.