INFN was founded on 8 August 1951, to further the nuclear physics research tradition initiated by Enrico Fermi in Rome, in the 1930s. The INFN collaborates with CERN, Fermilab and various other laboratories in the world. In recent years it has provided important contributions to grid computing.

During the latter half of the 1950s, the INFN designed and constructed the first Italian electron accelerator—the electron synchrotron developed in Frascati. In the early 1960s, it also constructed in Frascati the first ever electron-positron collider (ADA - Anello Di Accumulazione), under the scientific leadership of Bruno Touschek. [1] In 1968, Frascati began operating ADONE (big AdA), which was the first high-energy particle collider, having a beam energy of 1.5 GeV. [2] [3] During the same period, the INFN began to participate in research into the construction and use of ever-more powerful accelerators being conducted at CERN.

The INFN has Sezioni (Divisions) in most major Italian universities and four national laboratories. It has personnel of its own, but it is mostly the main funding agency for high-energy physics in Italy. University personnel can be affiliated with INFN and receive from it research grants.

A collider is a type of particle accelerator which brings two opposing particle beams together such that the particles collide. Colliders may either be ring accelerators or linear accelerators. 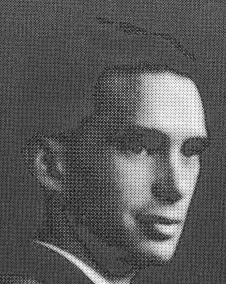 Bruno Touschek was an Austrian physicist, a survivor of the Holocaust, and initiator of research on electron-positron colliders. 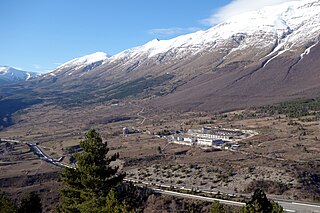 Laboratori Nazionali del Gran Sasso (LNGS) is the largest underground research center in the world. Situated below Gran Sasso mountain in Italy, it is well known for particle physics research by the INFN. In addition to a surface portion of the laboratory, there are extensive underground facilities beneath the mountain. The nearest towns are L'Aquila and Teramo. The facility is located about 120 km from Rome.

CEBAF Large Acceptance Spectrometer (CLAS) is a nuclear and particle physics detector located in the experimental Hall B at Jefferson Laboratory in Newport News, Virginia, United States. It is used to study the properties of the nuclear matter by the collaboration of over 200 physicists from many countries all around the world.

ADONE was a high-energy particle collider. It collided electrons with their antiparticles, positrons. It was 105 meters in circumference. It was operated from 1969 to 1993, by the National Institute of Nuclear Physics (INFN) at the Frascati National Laboratory (LNF), in Frascati, Italy.

The Photo Injector Test Facility at the DESY location in Zeuthen (PITZ) was built in order to test and to optimize sources of high brightness electron beams for future free electron lasers (FELs) and linear colliders. The focus at PITZ is on the production of intense electron beams with very small transverse emittance and reasonably small longitudinal emittance which are required in order to meet the high-gain conditions of FEL operation. This challenge is met by applying the most advanced techniques in combination with key parameters of projects based on TESLA technology like FLASH and the XFEL.

Borexino is a particle physics experiment to study low energy (sub-MeV) solar neutrinos. The detector is the world's most radio-pure liquid scintillator calorimeter. It is placed within a stainless steel sphere which holds the photomultiplier tubes (PMTs) used as signal detectors and is shielded by a water tank to protect it against external radiation and tag incoming cosmic muons that manage to penetrate the overburden of the mountain above.

ADA was one of the first Italian particle accelerator and the first-ever electron–positron particle collider measuring around 1.3 metres in diameter which was designed to store beams of 250 MeV.

The WIMP Argon Programme (WARP) is an experiment at Laboratori Nazionali del Gran Sasso, Italy, for the research of cold dark matter. It aims to detect nuclear recoils in liquid argon induced by weakly interacting massive particles (WIMP) through scintillation light; the apparatus can also detect ionization so to exclude interactions of photons and electrons. The experiment is a recognized CERN experiment (RE15).

The DarkSide collaboration is an international affiliation of universities and labs seeking to directly detect dark matter in the form of weakly interacting massive particles (WIMPs). The collaboration is planning, building and operating a series of liquid argon time projection chambers (TPCs) that are employed at the Gran Sasso National Laboratory in Assergi, Italy. The detectors are filled with liquid argon from underground sources in order to exclude the radioactive isotope 39
Ar, which makes up one in every 1015 (quadrillion) atoms in atmospheric argon. The Darkside-10 (DS-10) prototype was tested in 2012, and the Darkside-50 (DS-50) experiment has been operating since 2013. Darkside-20k (DS-20k) with 20 tonnes of liquid argon is being planned as of 2019.

The INFN National Laboratory of Frascati (LNF) was founded in 1954 with the objective of furthering particle physics research, and more specifically to host the 1.1 GeV electrosynchrotron, the first accelerator ever built in Italy. The Laboratory later developed the first ever electron-positron collider: from the first prototype AdA, which demonstrated the feasibility, to the ring ADONE and later on to DAΦNE, still operative today (2020). LNF was also the proposed site of the cancelled particle accelerator SuperB.

Juliet Lee-Franzini was the founding faculty member of the high energy physics experimental group at the newly established Stony Brook University. She was a successful teacher and many of her students head particle physics research groups all over the world.

Giorgio Salvini was an Italian physicist and politician. 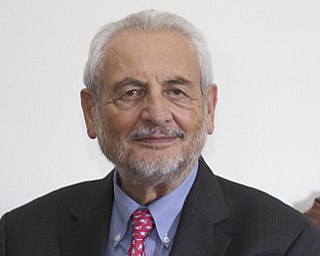 Claudio Pellegrini is an Italian/American physicist known for his pioneering work on X-ray free electron lasers and collective effects in relativistic particle beams.

Sergio Bertolucci is an Italian particle physicist, and a former Director of Research and Scientific Computing at CERN.

Monochromatization in the context of accelerator physics is a theoretical principle used to increase center-of-mass energy resolution in high-luminosity particle collisions. The decrease of the collision energy spread can be accomplished without reducing the inherent energy spread of either of the two colliding beams, introducing opposite correlations between spatial position and energy at the interaction point (IP). In beam-optical terms, this can be accomplished through a non-zero dispersion function for both beams of opposite sign at the IP. The dispersion is determined by the respective lattice.

The Laboratori Nazionali di Legnaro is one of the four major research centers of the Italian National Institute for Nuclear Physics (INFN). The primary focus of research at this laboratory is in the fields of nuclear physics and nuclear astrophysics, where five accelerators are currently used. It is one of the most important facilities in Italy for research in these fields. The main future project of the laboratory is the Selective Production of Exotic Species (SPES), in which various radionuclides will be produced for research and medicinal purposes.

Luisa Cifarelli FInstP is a Professor of Experimental Particle Physics at the University of Bologna. She is the Director of the La Rivista del Nuovo Cimento.