John Chaloner "Jack" Alabaster (born 11 July 1930) is a former cricketer who played 21 Tests for New Zealand from 1955 to 1972. A leg-spin bowler, he was the only New Zealander to play in each of the country's first four Test victories. He was born in Invercargill, and in domestic cricket was often partnered at the crease for his provincial side Otago by his younger brother Gren, who bowled off-spin.

Despite having played no first-class cricket Alabaster was selected for the New Zealand side to tour Pakistan and India in 1955-56. [1] He played in five of the eight Tests but took only two wickets. He did, however, take 2 for 30 and 5 for 99 when the New Zealanders defeated Indian domestic side South Zone by an innings in Bangalore. Later that season Alabaster was a member of the team that won New Zealand's first Test victory, against West Indies at Eden Park, Auckland; he took two wickets as the West Indies were dismissed for their lowest Test score of 77. [2]

Alabaster had successful domestic seasons in 1956-57 and 1957-58, in which season he took 36 wickets for 18.00, including 4 for 35 and 6 for 40 to help Otago beat Auckland at Dunedin. Otago also won the Plunket Shield, and Alabaster was selected to tour England in 1958. He showed good form in the early matches, taking 6 for 37 and 5 for 43 in an innings victory over Leicestershire. [3] He took 4 for 46 in the first innings of the First Test at Edgbaston against England, but lost his spot after the Second Test. In assessing his tour, Wisden noted that he "spun the ball little" but deceived the batsmen with "his accuracy and variations of flight". [4]

After strong seasons in 1959-60 and 1960-61 he returned to the national side for the tour to South Africa in 1961-62. He took his best Test match figures of 8 for 180 (off 75 overs) in New Zealand's victory in the Third Test at Cape Town, its first-ever Test victory outside New Zealand, [5] and took career-best first-class innings figures of 7 for 41 against a South African Colts XI at East London. He also took four wickets in New Zealand's victory in the Fifth Test; along with John Reid and Noel McGregor he played in all of New Zealand's first three Test victories. He took 86 wickets in 16 first-class matches on the tour, including 22 at an average of 28.04 in the Tests. Writing in Wisden , Geoffrey Chettle wrote, "In Alabaster we were privileged to meet the finest leg-spinner - a real finger-worker - seen in this country for many years." [6]

He took five wickets in two Tests against England in 1962-63, [7] but played less regularly in subsequent seasons. He next played a full season in 1967-68 and struck good form, including 5 for 43 and 5 for 79 for Otago against Northern Districts at Dunedin. [8] He was selected in all four Tests against the touring Indian team, taking 12 wickets at 31.83. In the First Test in Dunedin he took 3 for 66 and 3 for 48, as well as making his highest Test score of 34, batting at number 10. When New Zealand won the Second Test at Christchurch he became the only New Zealander to have been in the team for each of the country's first four Test victories. [9] [10]

Alabaster and his wife Shirley married in 1953. They live in Alexandra. Shirley received the Queen's Service Medal in 2009 for her work in support of the Dunstan Hospital in Clyde. [14]

Norman Gallichan was a New Zealand cricketer who played first-class cricket for Wellington and one Test for New Zealand.

David Robert O'Sullivan played 11 Tests and three One Day Internationals for New Zealand between 1973 and 1976. He played first-class cricket from 1971 to 1985. 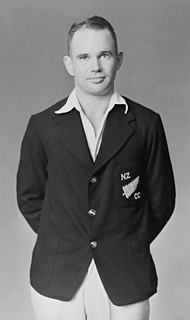 Albert William Roberts was a New Zealand Test cricketer who played in five Tests from 1930 to 1937.

Donald Derek Beard was a New Zealand cricketer who played in four Tests from 1952 to 1956.

Allen Fisher Lissette was a New Zealand cricketer who played in two Tests in 1956. 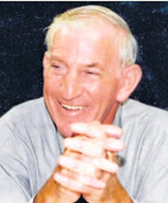 Wynne Pennell Bradburn was a New Zealand cricketer who played in two Tests against South Africa in 1964.

Grenville David "Gren" Alabaster is a former New Zealand first class cricketer for Otago, Canterbury and Northern Districts. A winner of the New Zealand Cricket Almanack Player of the Year Award in 1972, Alabaster was a right-arm off-break bowler. He represented New Zealand on occasions, including the tour to Australia in 1973-74, but never in a Test match. His brother Jack Alabaster played 21 Tests. 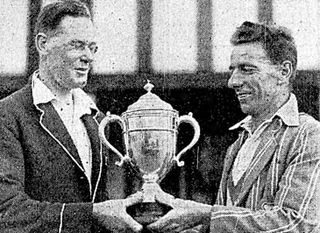 The Hawke Cup is a non-first-class cricket competition for New Zealand's district associations. Apart from 1910–11, 1912–13 and 2000–01 the competition has always been on a challenge basis. To win the Hawke Cup, the challengers must beat the holders, either outright or on the first innings in a drawn match, on the holders' home ground.

Southland are a cricket team representing the Southland Region of New Zealand. They compete in the Hawke Cup.

Keith Oliver Campbell is a former New Zealand cricketer. A middle-order batsman, medium-pace bowler and occasional wicket-keeper, he played for Otago from 1963-64 to 1978-79, and toured the West Indies in 1971-72 and Australia in 1973-74 with the New Zealand cricket team, but did not play Test cricket.

John Allen Doig was a New Zealand cricketer who played first-class cricket for Southland from 1915 to 1921. 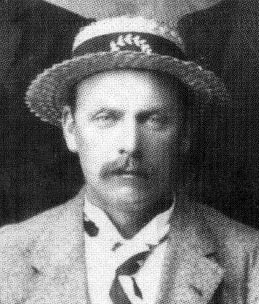 Ata Mamea Matatumua is a former Samoan cricketer who played in New Zealand domestic competitions in the 1960s. His first-class career consisted of eight matches for Otago.

The Australian cricket team toured New Zealand in January and February 1878, before their 1878 tour of England. It was the first overseas tour by a representative Australian team.