The club is based at Grace Road, Leicester and have also played home games at Aylestone Road in Leicester, at Hinckley, Loughborough, Melton Mowbray, Ashby-de-la-Zouch and in Coalville inside the traditional county boundaries; and at Uppingham and Oakham over the border in Rutland.

In limited overs cricket, the kit colours are red with black trim in the Royal London One Day Cup and black with red trim in the T20. The shirt sponsors are Oval Insurance Broking with Highcross Leicester (shopping centre) on the top reverse side of the shirt.

Cricket may not have reached Leicestershire until well into the 18th century. A notice in the Leicester Journal dated 17 August 1776 is the earliest known mention of cricket in the county. Soon afterwards, a Leicestershire and Rutland Cricket Club was taking part in important matches, mainly against Nottingham Cricket Club and Marylebone Cricket Club (MCC). This club was prominent from 1781 until the beginning of the 19th century.

Little more is heard of Leicestershire cricket until the formation of the present club on 25 March 1879.

Essex CCC versus Leicestershire CCC at Leyton on 14, 15 & 16 May 1894 was the first first-class match for both clubs. In 1895, the County Championship was restructured into a 14-team competition with the introduction of Essex, Leicestershire and Warwickshire CCC.

Leicestershire's first 70 years were largely spent in lower table mediocrity, with few notable exceptions. In 1953, the motivation of secretary-captain Charles Palmer lifted the side fleetingly to third place, but most of the rest of the 1950s was spent propping up the table, or thereabouts.

Change came in the late 1950s with the recruitment of the charismatic Willie Watson at the end of a distinguished career with England and Yorkshire. Watson's run gathering sparked the home-grown Maurice Hallam into becoming one of England's best opening batsmen. In bowling, Leicestershire had an erratically successful group of seamers in Terry Spencer, Brian Boshier, John Cotton and Jack van Geloven, plus the spin of John Savage.

Another change was in the captaincy: Tony Lock, the former England and Surrey spinner who had galvanised Western Australia.

The 1970s and the first golden era

Ray Illingworth, again from Yorkshire, instilled self-belief to the extent that the county took its first ever trophy in 1972, the Benson & Hedges Cup with Chris Balderstone man of the match. This was start of the first golden era as the first of five trophies in five years and included Leicestershire's first ever County Championship title in 1975. A couple of runners up spots were also thrown in. [2]

The game when Leicestershire won their first ever County Championship, on 15 September 1975, marked something of a personal triumph for Chris Balderstone. Batting on 51 not out against Derbyshire at Chesterfield, after close of play he changed into his football kit to play for Doncaster Rovers in an evening match 30 miles away (a 1–1 draw with Brentford). Thus he is the only player to have played League Football and first class cricket on the same day. He then returned to Chesterfield to complete a century the following morning and take three wickets to wrap up the title. To add to that season's success for Leicestershire was a second Benson & Hedges victory. [2]

A runners up spot in the 1982 County Championship brought some respectability, but the decade's only first class silverware was in the 1985 Benson & Hedges Cup with Balderstone still on board making him the most successful trophy winner in the club's history with six. [2]

Leicestershire won the county championship in 1996, and again in 1998. This was an amazing achievement considering the resources of the club compared to other county teams. This Leicestershire side, led by Jack Birkenshaw and James Whitaker, used team spirit and togetherness to get the best out of a group of players who were either discarded from other counties or brought through the Leicestershire ranks.

This team did not have many stars, but Aftab Habib, Darren Maddy, Vince Wells, Jimmy Ormond, Alan Mullally and Chris Lewis all had chances for England. West Indian all-rounder Phil Simmons was also named as one of Wisden's Cricketers of the year in 1997 while playing for the club.

2000 and beyond: Twenty20 success and four-day struggles

The advent of Twenty20 cricket saw Leicestershire find a new source of success, winning the domestic T20 competition in 2004, 2006 and 2011. However, in the era of two-division County Championship cricket they have found success more difficult to come by, having not played in the top division since 2003 and been regular "wooden spoon" contenders. In 2013 and 2014 they finished without a single Championship win, the first team to achieve this unwanted feat in back to back seasons since Northamptonshire just before World War II.

Most first-team winners medals for Leicestershire

The Leicestershire Sub Academy is designed for young cricketers who have potential to play at the highest level. It is also called the EPP (Emerging Player Programme). Many players who are involved in this set up move on to the LCCC academy, where they will play matches against academies from other counties. 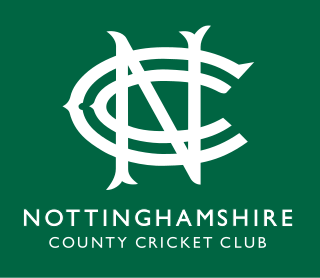 Nottinghamshire County Cricket Club is one of eighteen first-class county clubs within the domestic cricket structure of England and Wales. It represents the historic county of Nottinghamshire. The club's limited overs team is called the Notts Outlaws.

The Benson & Hedges Cup was a one-day cricket competition for first-class counties in England and Wales that was held from 1972 to 2002, one of cricket's longest sponsorship deals. 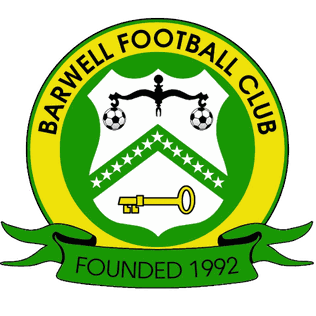 Barwell Football Club is a football club based in Barwell, near Hinckley in Leicestershire. They are currently members of the Southern League Premier Division Central and play at Kirkby Road.

John Christopher Balderstone was an English professional in cricket and football, and one of the last sportsmen to combine both sports over a prolonged period. He played football as a midfielder for Huddersfield Town, Carlisle United, Doncaster Rovers and Queen of the South. He played and umpired first-class cricket making it to international level – he played in two Tests in 1976 and umpired two ODIs from 1994 to 1998. In a long club career he was a key part of the five trophy winning Leicestershire side of the early and mid-1970s.

Graham Frederick Cross is a former professional footballer and cricketer. He is the record appearance holder for Leicester City, making 599 appearances for the club in all competitions.

The 1983 English cricket season was the 84th in which the County Championship had been an official competition. The third Prudential World Cup was won by India. New Zealand won a Test series in England for the first time. Essex won the Schweppes County Championship and Yorkshire won the Sunday League. The MCCA Knockout Trophy was inaugurated.

Derbyshire County Cricket Club in 1997 was the cricket season when the English club Derbyshire had been playing for one hundred and twenty-six years. In the County Championship, they won two matches to finish sixteenth in their ninety fourth season in the Championship. They came fourteenth in the AXA Life League and did not progress from the group in the National Westminster Bank Trophy. They reached the semi-final of the Benson & Hedges Cup.

Derbyshire County Cricket Club in 1986 was the cricket season when the English club Derbyshire had been playing for one hundred and sixteen years. In the County Championship, they won five matches to finish eleventh in their eighty second season in the Championship. They came ninth in the John Player League and reached round 2 in the National Westminster Bank Trophy. They reached the quarter-final of the Benson & Hedges Cup.

Derbyshire County Cricket Club in 1983 was the cricket season when the English club Derbyshire had been playing for one hundred and twelve years. In the County Championship, they won seven matches to finish ninth in their seventy ninth season in the Championship. They came sixth in the John Player Special League. They did not progress from the group in the Benson & Hedges Cup and reached round two in the National Westminster Bank Trophy.

Midlands 2 East (North) is a level 7 English Rugby Union league and level 2 of the Midlands League, made up of teams from the northern part of the East Midlands region including clubs from Derbyshire, Lincolnshire, Nottinghamshire and the occasional team from Leicestershire, with home and away matches played throughout the season. When this division began in 1992 it was known as Midlands East 1, until it was split into two regional divisions called Midlands 3 East (North) and Midlands 3 East (South) ahead of the 2000–01 season. Further restructuring of the Midlands leagues ahead of the 2009–10 season, led to the current name of Midlands 2 East (North).