The County Cricket Ground, known for sponsorship reasons as The1st Central County Ground, [1] is a cricket venue in Hove, East Sussex, England. The County Ground is the home of Sussex County Cricket Club, where most Sussex home matches since 1872 have been played, although many other grounds in Sussex have been used. Sussex CCC continue to play some of their games away from The County Ground, at either Arundel Castle and Horsham. It is one of the few county grounds to have deckchairs for spectators, in the Sussex CCC colours of blue and white, [2] and was the first cricket ground to install permanent floodlights, for day/night cricket matches and the second ground (after Edgbaston) to host a day/night match in England, in 1997. [3]

In 1872, George "Farmer" Bennett became the first batsman in first-class cricket to be given out handled ball during a match between Kent and Sussex at the County Ground. [5] In 1873, Sussex bowled Worcestershire out for 19 at Hove. [6] In 1884–85, the public raised £4,400 towards the purchase of the ground, with the Earl of Sheffield contributing an additional £600. [7] In the 20th century, the ground was used for some other cricket matches, such as a charity match in 1927 between the "Jockeys" and the "Racing Press", in aid of the Royal Sussex County Hospital and the Royal Alexandra Children's Hospital, [8] and an annual match between local commercial travellers and grocers, nicknamed "Travellers v. Grocers"; in 1925, the match was won by the Travellers by 1 run. [9]

In 2003, The County Ground was the venue where Sussex won their first County Championship title. In that match, Sussex batsman Murray Goodwin also scored 335*, which was then highest score by a Sussex player in first-class cricket. [lower-alpha 1] [17] The ground also saw Sussex win their third Championship title in 2007. [lower-alpha 2] [19]

During the 1890s, the County Ground was also used as a football ground for teams from the Brighton Area, including Brighton United of the Southern League (until they went bust in 1900), [20] and Brighton Athletic of the East Sussex League. [21] [22] The ground was also the venue for the Sussex lawn tennis championship meetings in 1893 [23] and 1899, [24] and in 1948, the County Ground also hosted a rugby union match between Brighton and a Midland Bank team. [25]

Many concerts have been held at the County Ground. Elton John has played at the ground in 2006, 2011 [26] and 2019, the ground has also hosted Madness, [27] Lionel Richie (with Shane Filan of Westlife as support act), Little Mix, Ollie Murs, Cliff Richard and Rod Stewart. As part of the London 2012 Olympic torch relay, the ground hosted an official Olympic torch event. [28] [29]

For many years, the County Ground has hosted one of the best fireworks display within the South East, for Guy Fawkes Night, which attracts circa 6,000 people per annum. Most recently, in 2019, the annual fireworks night sold out with over 7,500 attendees.

Brighton is a seaside resort and one of the two main areas of the city of Brighton and Hove. Located on the southern coast of England, in the county of East Sussex, it is 47 miles (76 km) south of London. 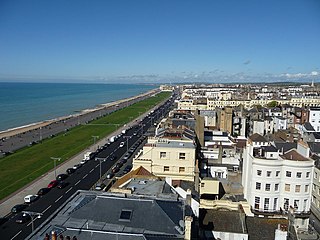 Hove is a seaside resort and one of the two main parts of the city of Brighton and Hove, along with Brighton. Originally a "small but ancient fishing village" surrounded by open farmland, it grew rapidly in the 19th century in response to the development of its eastern neighbour Brighton, and by the Victorian era it was a fully developed town with borough status. Neighbouring parishes such as Aldrington and Hangleton were annexed in the late 19th and early 20th centuries. In 1997, as part of local government reform, the borough merged with Brighton to form the Borough of Brighton and Hove, and this unitary authority was granted city status in 2000. 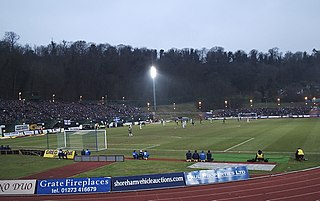 Withdean Stadium is an athletics stadium in Withdean, a suburb of Brighton. It was constructed in 1930. It was the home track of Olympic athlete Steve Ovett. Between 1999 and 2011 it was the home ground of football team Brighton & Hove Albion F.C..

Falmer Stadium, known for sponsorship purposes as the American Express Community Stadium or colloquially as the Amex, is a football stadium in the village of Falmer, in the City of Brighton and Hove, Sussex, that serves as the home of Premier League club Brighton & Hove Albion. The stadium was handed over from the developers to the club on 31 May 2011. The first competitive game played at the stadium was the 2010–11 season final of the Sussex Senior Cup between Brighton and Eastbourne Borough on 16 July 2011. The first league game was against Doncaster Rovers, who were also the opponents in the last game played at Brighton's former stadium, the Goldstone Ground, 14 years earlier.

Jason Lewry is an English former cricketer. He was a left-handed batsman and a left-arm fast-medium bowler. Born in Worthing, he played for Sussex from the beginning of his career in 1994 until his retirement in 2009, a career spanning 16 years, in spite of numerous injuries.

Whitehawk Football Club is a semi-professional English football club based in Whitehawk, a suburb of the city of Brighton and Hove, East Sussex. The club currently plays in the Isthmian League South East Division. Whitehawk's home ground is the 3126-capacity Enclosed Ground, at present known for sponsorship purposes as the TerraPura Ground, which is situated within East Brighton Park. Nicknamed The Hawks, the club's traditional playing colours are red and white. Prior to 2010, the club had never played above County League level, but after three promotions in four seasons, the Hawks reached Conference South in 2013 as well as the second round of the FA Cup in 2015. 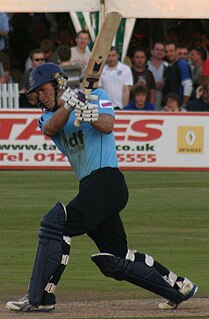 Joe Stephen Gatting is a first-class cricketer and former footballer who played for Hampshire until he was released at the end of the 2015 season. Gatting previously played football for Brighton & Hove Albion as a striker before being released on 31 October 2008. He however returned to football part-time for one season with Whitehawk.

The Prince of Wales Ground, also known as Prince's Ground, in Brighton, Sussex was the venue for top-class cricket matches in the closing years of the 18th century.

Brighton Cricket Club was based at Brighton, Sussex and was briefly a top-class team, playing seven matches between 1791 and 1814 which have been given first-class cricket status. It is often seen as being representative of Sussex as a county.

The Royal New Ground, also known as "Box's Ground", in Brighton, Sussex was a venue for first-class cricket matches from 1814 to 1847. Originally called "Brown's Ground" in the 18th century, it was located where Park Crescent, Brighton now stands.

The Royal Brunswick Ground, also known as "C H Gausden's Ground", in Hove, Sussex was a venue for first-class cricket matches from 1848 to 1871. The ground was situated to the west of the Brunswick Town area of Hove, roughly where Third and Fourth Avenues are today. As the land near the seafront was required for the expansion of the town, the club moved in 1872.

Brighton and Hove Cricket Club, nicknamed The Mighty Bensons, is an amateur cricket club based in East Sussex, in southern England. Their top team secured the Sussex Cricket League championship in 2000 and in 2007. Based since 1991 at the Nevill Sports Ground in Hove, southern England, the club achieved success in 1979 when it won both the first and second eleven competitions in the Sussex League, while playing at Horsdean.

West Hendford Cricket Ground was a first-class cricket ground in Yeovil, Somerset. The land for the ground was first leased by Yeovil Cricket Club in 1874 and was also used for a range of other sports, most significantly hosting Yeovil Rugby Club in the 1890s and then again from 1935 until the ground was closed. Significant improvements were made to the ground during the 1930s, including the opening of a new pavilion jointly funded by the Rugby and Cricket clubs. The ground was demolished in 1944 when Westland Aircraft extended their factory, and both Yeovil Cricket Club and Rugby Club moved to Johnson Park. 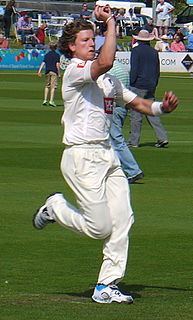 Matthew Edward Hobden was an English cricketer, a right-arm fast-medium bowler who batted right-handed. Born in Eastbourne, East Sussex, Hobden was educated at Millfield School and Eastbourne College. A police investigation into his death concluded in May 2016 with no further action or arrests.

Sport in Sussex forms an important part of the culture of Sussex. With a centuries-long tradition of sport, Sussex has played a key role in the early development of both cricket and stoolball. Cricket is recognised as having been formed in the Weald and Sussex CCC is England's oldest county cricket club. Slindon Cricket Club dominated the sport for a while in the 18th century. The cricket ground at Arundel Castle traditionally plays host to a Duchess of Norfolk's XI which plays the national test sides touring England. The sport of stoolball is also associated with Sussex, which has a claim to be where the sport originated and certainly where its revival took place in the early 20th century. Sussex is represented in the Premier League by Brighton & Hove Albion and in the Football League by Crawley Town. Brighton has been in the Premier League since 2017 and has been a League member since 1920, whereas Crawley was promoted to the League in 2011. Brighton & Hove Albion W.F.C. play in the FA Women's Super League from 2017. Sussex has had its own football association, since 1882 and its own football league, which has since expanded into Surrey, since 1920. In horse racing, Sussex is home to Goodwood, Fontwell Park, Brighton and Plumpton. The All England Jumping Course show jumping facility at Hickstead is situated 8 miles (13 km) north of Brighton and Hove.

Cricket in Sussex refers to the sport of cricket in relation to its participation and history within Sussex, England. One of the most popular sports in Sussex, it is commonly believed that cricket was developed in Sussex and the neighbouring counties of Kent and Surrey. Records from 1611 indicate the first time that the sport was documented in Sussex; this is also the first reference to cricket being played by adults. The first reference to women's cricket is also from Sussex and dates from 1677; a match between two Sussex women's teams playing in London is documented from 1747. Formed in 1839, Sussex County Cricket Club is believed to be the oldest professional sports club in the world and is the oldest of the county cricket clubs. Sussex players, including Jem Broadbridge and William Lillywhite were instrumental in bringing about the change from underarm bowling to roundarm bowling, which later developed into overarm bowling. For some time roundarm bowling was referred to as 'Sussex bowling'.