When the Benson & Hedges Cup ended in 2002, the ECB needed another one-day competition to fill its place. In response to dwindling crowds and reduced sponsorship the decision was made to launch a 20 over competition with the aim of boosting the game's popularity, particularly with the younger generation. The intention was to deliver fast-paced, exciting cricket which was accessible to fans who were put off by the longer versions of the game.

The first Twenty20 Cup was held in 2003 and was marketed with the slogan "I don’t like cricket, I love it" – a line from the cricket-themed pop song Dreadlock Holiday by 10cc.

The first official Twenty20 Cup matches were played on 13 June 2003. The first season of Twenty20 in England was a success, with the Surrey Lions defeating the Warwickshire Bears by nine wickets in the final to win the first Twenty20 Cup Final. On 15 July 2004 Middlesex versus Surrey (the first Twenty20 Cup game to be held at Lord's) attracted a crowd of 26,500, the largest attendance for any county cricket game other than a one-day final since 1953.[ citation needed ] The tournament saw six different winners in its seven years.

By the end of the 2009, the ECB had decided to implement a larger competition for the T20 format of the game. The Twenty20 English Premier League was a proposed cricket league to be run by the ECB consisting of the 18 county teams and two overseas teams divided into two divisions with promotion and relegation. [4] [5] The proposal was influenced by the success of the Indian Premier League and by Allen Stanford who had organised the Stanford Super Series in the Caribbean. After the collapse of Stanford's series the proposals were scrapped. Instead a modified 40 over league, the Clydesdale Bank 40 was implemented.

The Friends Provident T20 (renamed the FriendsLife T20 after just one season) was introduced in 2010. The competition initially divided the eighteen counties into North and South groups, before reverting to the previous model of three divisions of six teams. This period of Twenty20 cricket in England and Wales saw Leicestershire and Hampshire becoming the most successful sides, and in 2013 Northants won their first trophy for two decades.

NatWest became the tournament sponsors in 2014, renewing a longstanding relationship the bank had with the county game. The first year of the tournament saw 700,000 spectators attend the games, the most in the competition's history. [6] The tournament was won in 2014 by the Birmingham Bears, Warwickshire County Cricket Club's name for the purposes of Twenty20 cricket, making it the first time a county trophy had been won by a team using a city name. The final victors of this branding of the tournament in 2017 were Notts Outlaws.

Vitality became the tournament sponsors in 2018 after signing a deal to become the title partner for four years. [2]

The 18 first-class counties compete for the title, initially playing in two or three geographical divisions, the number varying across the years. In 2018, matches were moved to be played in a block during July and August with the aim of attracting large crowds during the school summer holidays. In seasons with three divisions the top two teams in each division and the two best third place teams qualify for the playoff stage, in seasons with two divisions the top four teams in each division qualify for the playoff stage, with a set of quarter-finals leaving four teams in the competition. The two semi-finals and the final are played on one finals day at Edgbaston in September. In 2020, due to the delay in the start of the season because of the COVID-19 pandemic matches started on 27 August in a three division format, with the quarter finals played on 1 October and the semi-finals and finals on 4 October (postponed due to rain on the third). [7]

Finals day has been held annually towards the end of the English cricket season.

The 2010 Friends Provident t20 tournament was the inaugural Friends Provident t20 Twenty20 cricket competition for the England and Wales first-class counties. The competition ran from 1 June 2010 until the finals day at The Rose Bowl on 14 August 2010. The eighteen counties were split into two regions, North and South, with the top four teams from each group progressing to the quarter-final knockout stage. The competition was won by Hampshire Royals, who beat Essex Eagles in the semi-finals, and Somerset in the final, by virtue of losing fewer wickets in a tied match.

The 2014 Royal London One-Day Cup tournament was the 2014 season ECB limited overs cricket competition for the England and Wales first-class counties. It replaced the ECB 40 tournament that ran from 2010 to 2013. The number of overs per innings was increased to 50 to bring the competition in line with One Day Internationals. Unlike in the previous competition, the national teams of Scotland, the Netherlands and the Unicorns cricket team did not participate in the competition.

The Women's Cricket Super League (WCSL), known as the Kia Super League (KSL) for sponsorship reasons, was a semi-professional women's Twenty20 cricket competition in England and Wales operated by the England and Wales Cricket Board (ECB). The competition featured six franchise teams, partnered with a variety of county teams and boards and universities, and was envisaged as a means to bridge the gap between amateur domestic cricket and the increasingly professional international game. 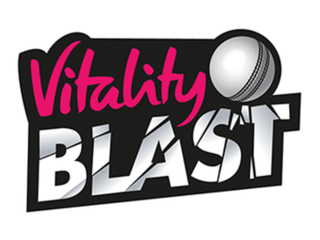 The 2018 Vitality Blast was the 2018 season of the t20 Blast, a professional Twenty20 cricket league in England and Wales. It was the first season in which the domestic T20 competition, ran by the ECB, has been branded as the Vitality Blast due to a new sponsorship deal. The league consisted of the 18 first-class county teams divided into two divisions of nine teams each with fixtures played between July and September. The final day took place at Edgbaston Cricket Ground in Birmingham on 15 September 2018.

The 2019 English cricket season will run between 26 March and 26 September. It will be the 120th in which the County Championship has been an official competition and will feature first-class, one-day and Twenty20 cricket competitions throughout England and Wales.

The Women's Twenty20 Cup, known since 2018 as the Vitality Women’s Twenty20 Cup, is a women's Twenty20 cricket competition organised by the England and Wales Cricket Board. After being cancelled in 2020, in 2021 it operated with regionalised groups, with teams having previously been arranged in tiered divisions.