Grace Road, known for sponsorship reasons as the Uptonsteel County Ground, Grace Road, [1] is a cricket ground in Leicester, England. It is the home ground and administrative base of Leicestershire County Cricket Club.

Leicestershire County Cricket Club bought in 1877 the land on which Grace Road now stands from the then Duke of Rutland, and spent the massive sum of £40,000 on developing a cricket club, athletic track and hotel. [2] The first match played there took place three months later, when Leicestershire played a touring Australia team. Contrary to popular belief, the road was named after Grace Margaret Yearby, the daughter of a local property owner Edward John Yearby, not W. G. Grace.

Leicestershire left the Grace Road site in 1901 due to lack of public transport to the ground causing low crowds. [3] They moved to a site near to Aylestone Road in order to be closer to the city centre. Leicestershire did eventually return to Grace Road in 1946, after the end of the Second World War, [4] and have been based there ever since, re-purchasing the land in 1966.

The record attendance is 16,000 who watched the match against the touring 1948 Australians.

Three One Day Internationals have been played at Grace Road, although none has involved England.

In the 1983 Cricket World Cup eventual winners India, chasing a target of 156, beat Zimbabwe by five wickets. [5] The second and third games were both in the 1999 World Cup. In the second Zimbabwe beat India by three runs, [6] and in the third the West Indies beat Scotland by eight wickets. [7]

One WTest century has been scored at the venue. [8]

Five WODI centuries have been scored at the venue. [9]

In front of the wicket at both ends the pitch is measured at 56 metres, while square of the wicket on both sides the dimensions are recorded as 76 metres. This is larger than most county grounds, but smaller than some of England's major international venues such as the Oval.

Nathan John Astle is a former New Zealand cricketer, who played all formats of the game. A right-handed batsman who played as an opener in One Day Internationals (ODI), while batting in the middle order in Test matches. In a career that spanned 12 years, Astle played 81 Tests and 223 ODIs accumulating 4,702 and 7,090 runs respectively. As of 2013, he is New Zealand's second-most prolific run scorer. Astle collected 154 wickets with his medium-paced bowling at the international level. He holds two records – scoring the fastest double century in Test cricket and the second highest individual score in the fourth innings of a Test match. Both the records were achieved when he made 222 against England in Christchurch in 2002.

New Road is a cricket ground in the English city of Worcester. It has been the home ground of Worcestershire County Cricket Club since 1896. Since October 2017 the ground has been known for sponsorship purposes as Blackfinch New Road following a five-year sponsorship arrangement with Blackfinch Investments.

The M. Chinnaswamy Stadium is a cricket stadium located in Bangalore, Karnataka. Flanked by the picturesque Cubbon Park, Queen's Road, Cubbon and uptown MG Road, this five-decade-old stadium is situated in the heart of the city of Bangalore It has a seating capacity of 40,000, and regularly hosts Test cricket, One Day Internationals (ODI), Twenty20 Internationals (T20i) and other First-class cricket matches, as well as musical and cultural events. The stadium is the home ground of the Karnataka state cricket team and the Indian Premier League franchise Royal Challengers Bangalore. It is owned by the Government of Karnataka and has been leased out to the Karnataka State Cricket Association (KSCA) for a period of 100 years. 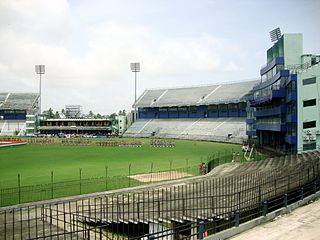 The Barabati Stadium is an Indian sports stadium used mostly for cricket and association football, and also sometimes for concerts and field hockey, located in Cuttack, Odisha. It is a regular venue for international cricket and is the home ground of Odisha cricket team. The stadium is owned and operated by the Odisha Cricket Association. It is also used for Association Football. It hosts Santosh Trophy national football tournament and the state's Odisha First Division League football matches. The Barabati Stadium is one of the older grounds in India, having hosted several touring sides – including the MCC, the West Indies team and the Australians - before it hosted its first international match. It hosted only the third one-day international in this country, in January 1982, when India put it across England by five wickets to lift the series 2–1. It hosted its first ever Test match five years later where India played hosts to Sri Lanka. Though it isn't one of the regular Test venues anymore, it continues to enjoy the status of international venue and hosts One-Day Internationals regularly. It also hosted the 2013 Women's Cricket World Cup.

Aylestone Road, now also known as the Leicester Electricity Sports Cricket Ground, is a cricket ground in Leicester, England, which was the headquarters of Leicestershire County Cricket Club from 1901 to 1939. Although the playing area is much reduced by housing and commercial developments, it is still used as a cricket ground, though not by the county team.