There are eighteen professional county clubs, [1] seventeen of them in England and one in Wales. All eighteen counties are named after, and were originally representative of, historic counties. These clubs are heavily dependent on subsidies from the England and Wales Cricket Board, which makes its money from television and endorsement contracts and attendances at international matches. The English cricket season traditionally starts at the beginning of April and runs through to the second half of September although in recent years counties have played pre season friendly matches at the very end of March.

Each summer the county clubs compete in the first class County Championship, which consists of two leagues of nine teams and in which matches are played over four days. The same teams also play one day cricket in the Royal London One-Day Cup, and Twenty20 cricket in the Vitality T20 Blast.

The Minor Counties Cricket Championship is a season-long competition in England for county clubs that do not have first-class status. There are nineteen teams representing historic English counties along with a Welsh minor counties team.

Below the county game, there are a raft of club competitions organised on a regional basis. ECB Premier Leagues being the highest level. There are also non-ECB-affiliated leagues such as the Bradford Cricket League, the Lancashire League and the Central Lancashire League.

The eighteen first-class counties are the top level cricket teams. They are named after historic English counties and include one Welsh county, Glamorgan. [ citation needed ]

The English first-class counties are:

The full name of the cricket team is usually formed from the name of the county followed by the words County Cricket Club, which are often abbreviated as CCC.

The following games are considered derbies:-

The opening first-class game of an English county cricket season has traditionally been played at Lord's between the MCC and the Champion County (the club that won the County Championship the previous year). When the Marylebone Cricket Club (MCC) plays against one of the first-class counties, the game is granted first-class status. [ citation needed ]

The six MCC-sponsored University (MCCU) teams, are also afforded first-class status for some of their matches against a first-class county. They are:

Originally scheduled to start in the 2020 season but postponed until 2021 due to the COVID-19 pandemic the Hundred is a new 100 ball cricket competition which will consist of eight city-based franchise teams, each of which will field both a men's and women's team which will be played in a league format. [ citation needed ]

See also: List of cricket grounds in England and Wales

The cricket grounds of England and Wales are smaller than the largest in some other countries, especially India and Australia, but the best of them have been modernised to a high standard, and two new international grounds have been built in recent years. The largest English cricket ground, Lord's in London, is internationally regarded as the "home of cricket". [3]

On 24 November 2006 the Rose Bowl, Southampton was awarded provisional test venue status by the England and Wales Cricket Board, with the prospect of the ground hosting its first Test match in 2010. [ citation needed ]

They are full members of the International Cricket Council. [10]

Each summer two foreign national teams visit England to play seven Test matches and numerous One Day Internationals. In the British winter the England team tours abroad. The highest profile rival of the England cricket team is the Australian team, with which it competes for The Ashes, one of the most famous trophies in British sport. [11] [12]

In 2005 the ECB concluded a commercial arrangement with BSkyB which gave Sky the exclusive television rights for live Test cricket in England for four years (the 2006 to 2009 seasons). This deal, which took live Test cricket for home England matches away from terrestrial television for the first time generated substantial future revenues for English cricket, but was criticised by many England cricket supporters and others. [13] [14] [15] [16]

Cricket is also one of the most popular participation sports in England after Football, Rugby and Tennis with most villages running a side every Sunday through the season, and towns putting out 2, 3, 4 and occasionally 5 sides for Saturday league matches, and 1 or 2 sides on a Sunday. Around 65% population of England follow Cricket. [17] [18] [19] [20] [21] The game is also popular in cities, with clubs like the King's Road Cricket & Social Club attracting members.[ promotional language ] 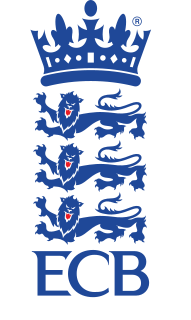 The England and Wales Cricket Board (ECB) is the governing body of cricket in England and Wales. It was formed on 1 January 1997 as a single governing body to combine the roles formerly fulfilled by the Test and County Cricket Board, the National Cricket Association and the Cricket Council. In April 1998 the Women's Cricket Association was integrated into the organisation. The ECB's head offices are at Lord's Cricket Ground in north-west London. 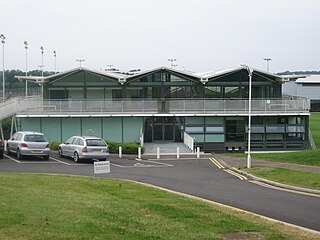 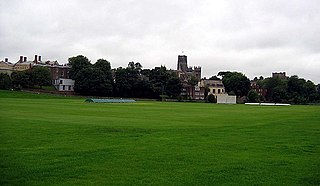 Paul Merwood Best is a former English cricketer. Best is a left-handed batsman who bowls slow left-arm orthodox who played for Warwickshire County Cricket Club. He was born at Nuneaton, Warwickshire and educated at Bablake School, Coventry. 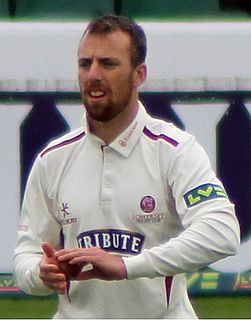 The 2018 Marylebone Cricket Club University Matches were a series of cricket matches played between the eighteen County Championship teams and the six Marylebone Cricket Club University teams (MCCU) of England and Wales. The first two rounds of fixtures were classed as first-class matches. Each county side were scheduled to play one fixture against a MCCU side ahead of the start of the 2018 County Championship. All the fixtures in the competition were affected by bad weather, with matches either ending in a draw, due to play not being possible because of rain, or in some cases, abandoned with no play possible across all three days.

The 2019 English cricket season ran between 26 March and 26 September. It was the 120th in which the County Championship has been an official competition and featured first-class, one-day and Twenty20 cricket competitions throughout England and Wales.

The 2020 English cricket season was originally scheduled to run between 2 April and 25 September. It was planned to have first-class, one-day and Twenty20 cricket competitions throughout England and Wales and as well as the launch of a new franchised 100 ball competition, The Hundred; it would have been the 131st year in which the County Championship has been an official competition.