James Patrick (born June 14, 1963) is a Canadian professional ice hockey coach and former player. He is currently the head coach for the Winnipeg Ice of the Western Hockey League (WHL).

After a successful collegiate career at the University of North Dakota, Patrick represented Canada at the 1984 Winter Olympics in Sarajevo, Yugoslavia. After the Olympics, Patrick signed his first professional contract on March 5, 1984 with the New York Rangers, and made his NHL debut two days later in Minnesota. Patrick scored his first NHL goal on March 17, 1984, in Philadelphia. Patrick enjoyed ten productive seasons in New York before being traded to the Hartford Whalers and then to the Calgary Flames during the 1993–94 season.

After several years in Calgary, Patrick signed with the Buffalo Sabres as a free agent after the 1997–98 season. Though he was chosen to play in the 1987 Canada Cup and many other international events, Patrick was never selected to the NHL All Star game. He ranks high among defencemen in both all times game played (1280) and total points (639). Patrick set a record (since broken) for career games played by a Team Canada player with 40 career games, breaking the previous record of 37 games in 2002. On September 8, 2005, Patrick announced his retirement from the NHL at the age of 42. He was immediately named to the Sabres' staff as a skill development coach. However, he left the team before the season to play in Germany's Deutsche Eishockey Liga with the Frankfurt Lions.

Patrick joined the Buffalo Sabres as assistant coach in 2006. He made his debut as head coach in February 2012, when Lindy Ruff was incapable of coaching due to an injury. After Ruff was fired in February 2013, Patrick remained with the Sabres' coaching staff until the end of the season, and then was let go. [1]

After the 2013 season he re-joined Ruff as an assistant coach with the Dallas Stars. At the end of the 2016–17 regular season, Patrick was let go when the Stars elected not to renew Ruff's expiring contract, after the team missed the playoffs. [2]

On June 6, 2017, it was announced that Patrick was named as the head coach for the Kootenay Ice of the Western Hockey League (WHL). [3]

Patrick is half Ukrainian and half English. His father, Stephen (born as Stepan Patrebka), was the child of Ukrainian immigrants from the Lviv region, and played for the Winnipeg Blue Bombers of the Canadian Football League. [4] Patrick is the brother of Steve and the uncle of Nolan Patrick.

In 2014, Patrick was charged with assault stemming from a domestic incident, while working as an assistant coach for the Dallas Stars. [5]

Lindy Cameron Ruff is a Canadian professional ice hockey coach who is the head coach for the New Jersey Devils of the National Hockey League (NHL). Ruff was previously the head coach of the Dallas Stars of the NHL, and also the head coach of the Buffalo Sabres from 1997 to 2013, with whom he won the Jack Adams Award in 2006. During his playing career, Ruff played in the NHL for the Sabres and New York Rangers, the former of which he captained.

Andy Murray is the current head coach for the Western Michigan Broncos men's ice hockey team of the NCAA Division I National Collegiate Hockey Conference (NCHC). He is a former head coach of the Los Angeles Kings and the St. Louis Blues in the National Hockey League.

Michael John Keane is a Canadian former professional ice hockey winger. Undrafted, Keane played over 1,100 games in the National Hockey League from 1988 until 2004. He then played five seasons for his hometown Manitoba Moose of the American Hockey League until he retired in 2010. Keane is a three-time Stanley Cup champion, having won with the Montreal Canadiens in 1993, Colorado Avalanche in 1996, and the Dallas Stars in 1999. He is one of only 11 players in NHL history to win the Cup with three or more different teams. On September 3, 2013, the Winnipeg Jets announced the hiring of Keane as Assistant of Player Development. 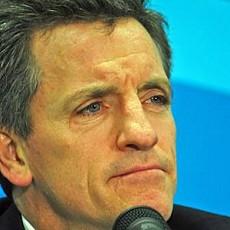 Mark Einar Johnson is an American ice hockey coach for the University of Wisconsin–Madison women's ice hockey team. He is a former NHL player who appeared in 669 NHL regular season games between 1980 and 1990. He also played for the gold medal-winning 1980 U.S. Olympic Hockey team.

Craig Patrick is an American former hockey player, coach and general manager, the son of Lynn Patrick and the grandson of Lester Patrick. During the 1980 Winter Olympics, Patrick was the Assistant General Manager and Assistant Coach under Herb Brooks for the United States men's national ice hockey team, which won the gold medal and defeated the Soviet Union in the "Miracle on Ice". From 1989 to 2006, Patrick was the General Manager of the Pittsburgh Penguins where he oversaw back-to-back Stanley Cup championships in 1991 and 1992, as well as the drafting and signing of some players that would later win a Stanley Cup title for the Penguins in 2009.

Stephen Gary Patrick is a Canadian former professional ice hockey player. He was drafted in the first round, 20th overall, by the Buffalo Sabres in the 1980 NHL Entry Draft. Patrick played 250 games in the National Hockey League (NHL) with the Sabres, New York Rangers, and Quebec Nordiques between 1980 and 1986. 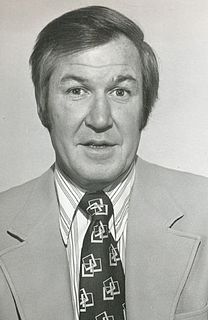 Joseph Richard Crozier is a Canadian former professional ice hockey defenceman and head coach who played and coached primarily in the minor leagues.

Brian Paul Engblom is a Canadian ice hockey broadcaster for the Tampa Bay Lightning and NBCSN, and a former professional hockey defenseman.

Michael Allen Ramsey is an American former professional ice hockey defenseman who played 1,070 regular season games in the NHL for the Buffalo Sabres, Pittsburgh Penguins and Detroit Red Wings between 1980 and 1997, after helping the 1980 U.S. Olympic hockey team win the Miracle On Ice and the gold medal at the 1980 Winter Olympics.

Scott William Arniel is a Canadian former professional ice hockey player and current assistant coach of the National Hockey League's Washington Capitals. Previously, he was the head coach of the Columbus Blue Jackets and associate coach of the New York Rangers.

Patrick William Flatley is a Canadian former professional ice hockey forward who played in the NHL for 14 seasons between 1983 and 1997 for the New York Islanders and New York Rangers.

Reed David Larson is an American former professional ice hockey defenseman and former captain of the Detroit Red Wings who played 904 regular season games in the National Hockey League between 1976 and 1990. He is a member of the United States Hockey Hall of Fame.

Glen Robert Sonmor was a Canadian professional ice hockey player, scout and coach. He played 28 games in the National Hockey League with the New York Rangers from 1953 to 1955, though most of his career was spent in the minor American Hockey League. After his playing career, Sonmor turned to coaching. He led the University of Minnesota from 1966 to 1972, then went to the World Hockey Association, where he was the general manager, and occasional coach, of the Minnesota Fighting Saints and Birmingham Bulls between 1972 and 1978. He then moved to the NHL to coach the Minnesota North Stars from 1978 to 1987. Later in his career, Sonmor became a scout for the Minnesota Wild of the NHL.

Grant Stuart Ledyard is a Canadian former professional ice hockey defenceman. Beginning his career in 1984 as an undrafted free agent, Ledyard spent 18 seasons in the NHL as a journeyman; he played at least one game with nine NHL teams over the course of his career.

Edward George Hampson is a Canadian former professional ice hockey centre, who played in the National Hockey League and World Hockey Association during the 1960s and 70s. Ted is the father of Gord Hampson.

Robert Lowes is a Canadian ice hockey executive, and former ice hockey coach. He has worked as the assistant director of player personnel for the Vegas Golden Knights since 2016. Lowes lead the Nipawin Hawks to the 1990 ANAVET Cup championship, before being a head coach in the Western Hockey League (WHL) for 12 seasons with the Brandon Wheat Kings, and the Regina Pats. He twice won the Dunc McCallum Memorial Trophy as the WHL Coach of the Year, and twice won the CHL Coach of the Year Award. Lowes also coached the Canada men's national under-18 ice hockey team, and later became director of amateur scouting for the Ottawa Senators.