The Deutsche Eishockey Liga (for sponsorship reasons called "PENNY Deutsche Eishockey Liga") (German pronunciation: [ˌdɔʏtʃə ˈʔaɪshɔkiː ˌliːɡaː] ; English: German Ice Hockey League) or DEL, is a German professional ice hockey league. Founded in 1994, it was formed as a replacement for the Eishockey-Bundesliga and became the new top-tier league in Germany as a result. Unlike the old Bundesliga, the DEL is not under the administration of the German Ice Hockey Federation.

In the 2016–17 season, the league was the second-best supported in Europe, behind the Swiss National League A, with an average attendance of 6,198 spectators per game. [1] Kölner Haie, Düsseldorfer EG and Eisbären Berlin all regularly attract over 15,000 fans for home games. In the DEL Winter Game, similar to the NHL Winter Classic, Cologne and Düsseldorf have played in front of crowds in excess of 40,000, notably in 2019 as Düsseldorf won in the RheinEnergieStadion.

The DEL is known for having a great game-day atmosphere with a few large modern arenas and other older, smaller venues. The German top flight is also known for producing NHL talents including Dominik Kahun from Red Bull München. Many of the German national team that took silver at the 2018 Winter Olympics in Pyeongchang played in the DEL, while Red Bull München became the first German team to reach the Champions Hockey League final in 2019, losing to Frölunda HC. Ice hockey is growing as a sport in Germany and is seen as a popular alternative to football or handball.

A new system of promotion and relegation with the DEL2 is set to begin with the 2021–22 season, in which the last-placed DEL club will be replaced by the DEL2 champions.

The Eishockey-Bundesliga was formed in 1957 as the elite hockey competition in the Federal Republic of Germany, replacing the Oberliga in this position. It was in turn replaced by the Deutsche Eishockey Liga, which now also carries the name 1st Bundesliga in its logo.

The DEL was founded in the 1994–95 season, consisting of teams from the Eishockey-Bundesliga's 1st and 2nd divisions. The condition of these earlier leagues had become intolerable. Many 1st and 2nd division teams were heavily in debt. The 2nd division attracted few sponsors and spectators. As a result, many clubs were forced to fold or withdraw to the lower leagues. Fans and corporate sponsors focused on the 1st Bundesliga teams, forcing the elite teams to invest heavily in players to avoid relegation. This increased budgets 25 percent over the previous two years.

In the final Bundesliga season, 1993–94, only 11 teams wanted to play in the 2nd Bundesliga. Furthermore, two teams folded during and after the season. Ice hockey's reputation in Germany was heavily tarnished. This made it difficult to attract serious sponsorship. In January 1994, 20 out of the remaining 21 1st and 2nd Bundesliga teams voted for creating a new entity, the DEL.

Upon founding, the "DEL Betriebsgesellschaft mbH" was the first German professional sports league managed by an organization whose members were incorporated as well. The goal behind the DEL was to create a league, based on the model of the North American NHL, in which teams could play consistently without relegation concerns and create a stable league. Clubs in the DEL were required to conform to rules, which were designed to ensure long-term viability. Twelve clubs from the old 1st Bundesliga, and six from the 2nd Bundesliga came together as founding members. The new league immediately attracted corporate sponsorship with the Krombacher Brewery, which was prominently featured on the new league logo.

The hope of avoiding the troubles of the old Bundesliga by stricter financial controls did not materialize. During DEL's initial season, on 18 December 1994, the Bundesliga's final champion, the renamed EC Hedos München, folded. This was controversial, as DEL's president Franz Hofherr had approved their license and certified their finances. Hofherr was Mad Dogs former president and it was alleged that he must have known about their desperate financial situation.

The Bosman ruling, a 1995 decision of the European Court of Justice regarding the movement of labor in soccer, had profound influence on the league. The old Bundesliga had national character with German clubs competing for the German title using mostly German players. After the ruling European Union players were excluded from the "foreign" player quota. In the 1995–96 season following the decision, the DEL teams employed 97 EU players. This lowered costs significantly, enabling smaller teams to compete more effectively. However, frequent player moves were not viewed positively by the fans, resulting in smaller attendance numbers.

Following an agreement with the DEB the league renamed itself as "DEL – Die 1. Bundesliga" in the 1999–2000 season, while reintroducing relegation and promotion to/from the 2nd Ice Hockey Bundesliga.

The DEL is an independently run league, fully owned and operated by its 14 member teams. Each team must fulfill the DEL's basic requirements to remain in the league:

The DEL can only admit one 2nd Bundesliga team per season to the league, unless the league strength falls below fourteen, in which case two clubs can be admitted. Since the 2006–07 season, no DEL team can be automatically relegated, a team can only lose its league status through non-compliance with the leagues regulations (see above).

The ESBG guarantees to admit any DEL team wishing to step down to the lower 2nd Bundesliga or Oberliga. The team, however, has to purchase a license (licensing fees for the 2nd Bundesliga are currently set at €100,000.00).

To regulate the relationship between the DEL, the DEB and the ESBG (2nd Bundesliga), a so-called Kooperationsvertrag exists. This cooperation contract was signed in December 2005, and was valid until 2011. This contract ended years of dispute between the three organizations over competencies and financial issues. [2] [3]

In November 2007, the DEL announced another change in policy. The league expanded to allow 16 teams beginning in the 2008–09 season, resulting in direct promotion for the 2nd Bundesliga league champions, should they fulfill all requirements and be interested in joining the DEL. Should this not be the case, or a current DEL team resigns from the league, a selection process would determine the club, or clubs, who would be eligible to join in order required to achieve 16 teams. (Note: Füchse Duisburg resigned before the 2009–10 season and was not replaced until the following season.)

For that season, it was also mandated that each DEL club would be allowed to have no more than ten non-EC players under contract.

Additionally, a new format for the game schedule will limit the number of regular-season games to 52 for each team. This is achieved by each team playing four games against eleven others and two games against the remaining four. To determine which teams play, the final standings of the previous season are used.

The DEL would also reintroduce promotion once more. The first- and second-lowest ranked teams will play a best-of-seven series to determine which team faces the 2nd Bundesliga champion for a place in the league. There is, however, an ongoing dispute about those games as second division teams may only have five foreign players on contract and therefore face a handicap in comparison to the DEL teams with twelve import players each. [4] For now, the ESBG has declared that no team from the 2nd Bundesliga would take part in these matches and therefore no promotion/relegation with the DEL will take place. [5]

32 clubs have played in the DEL since founding, with 14 currently playing. The 1994 standing represents the Bundesliga and 2. Bundesliga. 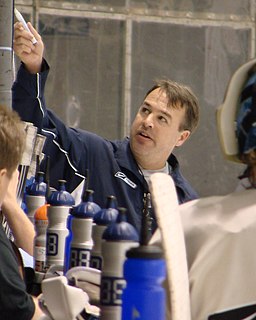 Stéphane Jean-Gilles Richer is a former Canadian professional ice hockey player who is currently serving as sport director at Eisbären Berlin of the Deutsche Eishockey Liga.

The 2nd Eishockey-Bundesliga was the second tier of Ice hockey in Germany until 2012/13 and has since been replaced by DEL2. Starting in 2002, the league was organized by the ESBG, to which the league organization was outsourced from the DEB, the German ice hockey federation. In the 2012–13 season, it featured 13 teams.

The Adler Mannheim are a professional ice hockey team of the Deutsche Eishockey Liga, the highest-level ice hockey league in Germany. The team is based in Mannheim, a city in the northern part of Baden-Württemberg. Currently, the team plays at SAP Arena, where they moved to at the beginning of the 2005–06 season after having played at Eisstadion am Friedrichspark for nearly seven decades from 1938 through 2005. They have won the German Championship a total of eight times, seven of those coming after 1994 in the Deutsche Eishockey Liga.

ERC Ingolstadt is a German professional ice hockey club that plays in the Deutsche Eishockey Liga (DEL). Commonly known as the Panthers, the team plays its home games at the Saturn Arena in Ingolstadt.

EV Landshut, also known as EVL Landshut Eishockey and formerly known as the Landshut Cannibals, are a professional ice hockey team based in Landshut, Bavaria, Germany. They currently play in Deutsche Eishockey Liga 2 (DEL2), the second level of ice hockey in Germany. They were promoted from the third-tier Oberliga in 2019 after winning the Oberliga finals against the Tilburg Trappers.

Donald Clinton Jackson is an American ice hockey coach and former professional ice hockey player who played 315 games in the National Hockey League between 1978 and 1987 and began his coaching career in 1988.

The DEL, 2nd Bundesliga and Oberliga are the first three levels of ice hockey in Germany. All three leagues operate nationwide. While the DEL is an independently operated league, the other two are run by the German ice hockey federation, the DEB, through the ESBG. The leagues below the Oberliga are operated by the state federations (German:Landesverbände) and don't run nationwide. The 2007–08 season for the three top leagues started on 6 September 2007 with the first round in the DEL and finished on 25 April 2008 with the fifth and last game of the 2nd Bundesliga finals.

The DEL, 2nd Bundesliga and Oberliga are the first three levels of ice hockey in Germany. All three leagues operate nationwide. While the DEL is an independently operated league, the other two are run by the German ice hockey federation, the DEB, through the ESBG. The leagues below the Oberliga are operated by the state federations (German:Landesverbände) and don't run nationwide. The 2006-07 season for the three top leagues started on 7 September 2006 with the first round in the DEL and finished on 17 April 2007 with the third and last game of the DEL finals, with the Adler Mannheim winning their fifth DEL title.

The 2008–09 Deutsche Eishockey Liga season was the 15th season since the founding of the Deutsche Eishockey Liga. 16 Teams played after the 2. Bundesliga Champion, the Kassel Huskies received the license to play in the DEL. After 52 rounds and the play-off's, the Eisbären Berlin won its 4th German Championship in the last five years.

David Wolf is a German professional ice hockey player who currently plays for Adler Mannheim of the Deutsche Eishockey Liga (DEL). He played five seasons in the Deutsche Eishockey Liga (DEL) for the Hannover Scorpions and Hamburg Freezers between 2009 and 2014 before moving over to North America. Internationally, Wolf has represented Germany at both the junior and senior levels.

DEL2 is the second tier ice hockey league in Germany, below the Deutsche Eishockey Liga (DEL) and ahead of the Oberliga. Founded in 2013 to replace the defunct 2nd Bundesliga, DEL2 is administered by ESBG, under licence from DEB.