The Eredivisie ("Premier League") was, during its existence, the only professional ice hockey league in the Netherlands and the highest level of competition organized by the Nederlandse IJshockey Bond (NIJB; English: "Dutch Ice Hockey Federation"). [1] [2] Formed in 1945 and playing continuously since 1964, the league mainly featured Dutch teams, although in some seasons certain Belgian teams competed. The league featured a mix of Dutch, European and overseas players. The winner of the Eredivisie was crowned the Dutch National Champion and represented the Netherlands in the IIHF Continental Cup. In 2015, with most of its teams facing financial problems and its top team, Tilburg Trappers, joining the German Oberliga, the Eredivise was suspended with the remaining teams joining the BeNe League.

The league had many different teams during its existence. The financial viability of teams and availability of an arena often determined which cities participated in any given year. The teams in its final year of competition were:

The league's format changed from year to year depending on the number of teams and the format of the Dutch Cup Tournament. As an example, in the 2013-14 year, the league had a 36-game regular season, followed by a best-of five semi-finals amongst the top five qualifiers and a best-of-five final for the Dutch championship.

The Dutch ice hockey Eredivisie was formed after World War II, with teams in Amsterdam, The Hague and Tilburg. It suspended operations from 1950 to 1964, but has organized a season of competition annually ever since. Over the years the number of teams competing fluctuated between 3 and 10 (currently 7), and the number of games played in the regular season between 4 and 36.

For the 2008-2009 Eredivisie season, the Utrecht Dragons and Eindhoven Kemphanen joined the league. In 2009-2010, Utrecht returned to the Eerste Divisie. Prior to the 2010-2011 season, Amstel Tijgers, one of the oldest teams in the league, dropped out, as did Groningen Grizzlies after three seasons, due to poor results on the ice and low revenues. In 2010, a new team, the Zoetermeer Panthers, won the Dutch Cup but dropped out of the first North Sea Cup tournament due to financial problems.

For two seasons, 2010–11 and 2011–12, the league's regular season consisted of a tournament with several Belgian teams called the North Sea Cup. The two countries maintained distinct national cups and national championship playoffs during these years. The Belgian teams, namely HYC Herentals, Turnhout White Caps, and Leuven Chiefs, struggled on and off the ice in the new league, with smaller budgets and fewer imported players than their Dutch counterparts. By the end of the second North Sea Cup season, Leuven and Turnhout had dropped out of the league. The North Sea Cup was disbanded in the summer of 2012 when the lone remaining Belgian team, HYC Herentals, was admitted as a full member of the Dutch Eredivisie.

For 2013-14, the Amsterdam G's, which replaced the Amstel Tijgers for 2011-2012 and 2013-2013, ceased operations after financial problems and back-to-back last place finishes, while the Dordrecht Lions began play in the Eredivisie. However, financial strains on several clubs and a wide disparity between the quality of the teams took a toll on competition and attendance. In 2015, the consistently strongest team of the league, Tilburg Trappers, joined the German Oberliga. This prompted the remaining teams of the Eredivisie to join with the top amateur teams in the Netherlands and Belgium to form the BeNe League, to provide greater financial stability and more balanced competition.

In Belgium, the Belgian National League operated as the league with the top Belgian teams, apart from HYC Herentals which played in the Eredivisie. Herentals competed in the Belgian Cup tournament but in the Dutch national championship tournament.

Upon the demise of the Eredivisie, the remaining Eredivisie teams merged with the Eerste Divisie and Belgian National League teams to form the BeNe League.

Willem II, also known as Willem II Tilburg, is a Dutch football club based in Tilburg, Netherlands, whose team plays in the Eredivisie, the top tier in Dutch football. The club was founded on 12 August 1896 as Tilburgia. On 12 January 1898, the club was renamed Willem II after Dutch king William II of the Netherlands, who, as Prince of Orange and commander of the Dutch army, had his military headquarters in Tilburg during the Belgian uprising of 1830, spent much time in the city after becoming king, and died there.

The KNVB Beker, branded as the TOTO KNVB Beker for sponsorship reasons, is a competition in the Netherlands organized by the Royal Dutch Football Association (KNVB) since 1898. It was based on the format of the English FA Cup. Outside the Netherlands, it is often referred to as the Dutch Cup. The tournament consists of all teams from the top four tiers of Dutch league football, as well as the 24 semi-finalists of the six KNVB District Cups. The finals of the tournament traditionally takes place in De Kuip, and has been held there every season since the 1989 final. The winners of the cup compete against the winners of the Eredivisie for the Johan Cruyff Shield, which acts as the curtain raiser for the following season.

Amsterdam Tigers are an ice hockey team in Amsterdam, Netherlands, playing in the First Division. 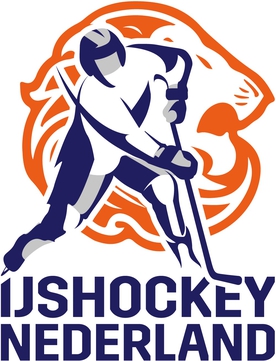 The Nederlandse IJshockey Bond is the official governing body of ice hockey in the Netherlands. It was founded in 1933 as a three team league with The Hague, Amsterdam and Tilburg. It joined the International Ice Hockey Federation in 1935. In 1946, it created the Eredivisie.

The Belgian Hockey League, also known as the Belgian Elite League, was the highest level of competition organized by the Royal Belgian Ice Hockey Federation. The league winner was crowned the Belgian Champion. The league had been in existence since 1912. The Brussels Royal IHSC were the most decorated team with 23 titles. In 2015, the league merged with the Dutch Eredivisie to form the BeNe League.

The North Sea Cup was a short-lived hockey league that temporarily succeeded the Dutch Eredivisie from 2010-2012. It was the only professional ice hockey league in the Netherlands and the highest level of competition sanctioned by the Nederlandse IJshockey Bond and sanctioned by the Royal Belgian Ice Hockey Federation during the years that it operated.

HYS The Hague is the ice hockey club in The Hague, Netherlands. Founded in 1933, the club's top team plays in the Dutch/Belgian BeNe League and competes annually in the Dutch National Championships and the Dutch Cup tournament.

The UNIS Flyers are an ice hockey club located in Heerenveen, Netherlands. The team competes in the BeNe League and also takes part in the Dutch Cup. Home games are played in the ice hockey arena which forms part of the Thialf complex.

HYC Herentals is an ice hockey team in Herentals, Belgium. They play in the BeNe League and are known, for sponsorship reasons, as ERA Renomar HYC Herentals.

IHC Leuven, is an ice hockey team in Leuven, Belgium. Leuven plays in the BeNe League, where it competes as the Leuven Chiefs. The team are the current Belgian national ice hockey champions, having won the league playoffs in 2013. It also competes annually for the Belgian Cup.

The Belgian Cup is the national ice hockey cup in Belgium. It has been competed for since 1986. It is currently competed for by the teams of the Belgian National League hockey league and by the lone Belgian team of the Dutch Eredivisie, HYC Herentals.

The 2010–11 North Sea Cup was the inaugural season of the North Sea Cup, which succeeded the Dutch Eredivisie as the highest level of ice hockey competition in the Netherlands. Two former Belgian Elite Series teams, HYC Herentals and White Caps Turnhout, participated with the six remaining teams of the Dutch Eredivisie after Amstel Tijgers and Groningen Grizzlies dropped out before the season began and the new Zoetermeer Panthers team dropped out at the beginning of the season.

The Dutch Cup, better known in Dutch as the "Beker" or "Bekercompetitie", is the national ice hockey cup in the Netherlands. It was held from 1938 to 1939, and 1971-present. The Dutch Cup is usually an autumn competition that precedes or runs simultaneously with the regular season of the BeNe League, the Dutch and Belgian semi-professional ice hockey league.

The 1983–84 Eredivisie season was the 24th season of the Eredivisie, the top level of ice hockey in the Netherlands. Six teams participated in the league, and the Nijmegen Tigers won the championship.

The 2012–13 Eredivisie season was the 53rd season of the Eredivisie ice hockey league, and the first since the disbanding of the North Sea Cup and the reversion to the league's original name. Six Dutch teams and one Belgian team took part in the season.

The BeNe League is the highest-level professional ice hockey league in Belgium and the Netherlands. The league was founded in 2015, following a merger between the Belgian Hockey League and the Dutch Eredivisie and thus became the top tier of the sport in both nations. In terms of league structure, the BeNe League is made up of 11 teams, 6 from the Netherlands and a further 5 from Belgium, and they all play in a single group. The league features a mix of Belgian, Dutch, European and overseas players.