The Qatar International Ice Hockey League is the ice hockey league in Qatar. It was first contested in 2003.

Qatar, officially the State of Qatar, is a country located in Western Asia, occupying the small Qatar Peninsula on the northeastern coast of the Arabian Peninsula. Whether the sovereign state should be regarded as a constitutional monarchy or an absolute monarchy is disputed. Its sole land border is with neighbouring Gulf Cooperation Council (GCC) monarchy Saudi Arabia to the south, with the rest of its territory surrounded by the Persian Gulf. An arm of the Persian Gulf separates Qatar from the nearby Bahrain.

The Qatar International Ice Hockey League (QIIHL) was founded in 2003. [1] Usually league games are played at the Villaggio Ice Rink of the Villagio Shopping Mall in Doha. Due to the different play levels, the league is divided into two divisions (A and B). Since 2007, the Desert Cup is also played in the country. It is planned to install a team with only domestic players to form a national ice hockey team. [2]

Doha is the capital and most populous city of the State of Qatar. Doha has a population of 1,850,000 in the city proper with the population close to 2.4 million. The city is located on the coast of the Persian Gulf in the east of the country. It is Qatar's fastest growing city, with over 80% of the nation's population living in Doha or its surrounding suburbs, and it is also the economic centre of the country.

In 2010, the QIIHL sponsored the 2010 Red Bull Crashed Ice qualification tournament in Qatar. [3] The competition was won by Bill Chase, a SandVipers (QIIHL) player. [4]

Crashed Ice is a world tour in the winter extreme sporting event, ice cross downhill, which involves downhill skating in an urban environment, on a track which includes steep turns and high vertical drops. The series was created and is managed by energy drinks company Red Bull. It is similar to ski cross and snowboard cross, except with ice skates on an ice track, instead of skis or snowboards on a snow track.

An ice rink is a frozen body of water and/or hardened chemicals where people can ice skate or play winter sports. Besides recreational ice skating, some of its uses include ice hockey, bandy, rink bandy, ringette, broomball, speed skating, figure skating, ice stock sport and curling as well as exhibitions, contests and ice shows. There are two types of rinks in prevalent use today: natural, where freezing occurs from cold ambient temperatures, and artificial, where a coolant produces cold temperatures in the surface below the water, causing the water to freeze. There are also synthetic ice rinks where skating surfaces are made out of plastics.

The Heritage Junior B Hockey League (HJHL) is a Junior B ice hockey league in Alberta, Canada, sanctioned by Hockey Canada. The HJHL was founded in 1987 and is made up of teams from southern and central Alberta. The HJHL is the largest Junior B league in the province, with 15 teams that competed in 2006-07. The top two teams qualify for the Alberta Provincial Junior B Hockey Championship, whose winner had an option to compete in the Keystone Cup.

The Oakville Blades are a Junior "A" ice hockey team from Oakville, Ontario, Canada. They are a part of the Ontario Junior Hockey League.

The Bozeman Icedogs are a Tier III Junior ice hockey team located in Bozeman, Montana. The team is a member of the North American 3 Hockey League (NA3HL). The Icedogs play home games at the Haynes Pavilion located at the Gallatin County Fairgrounds. 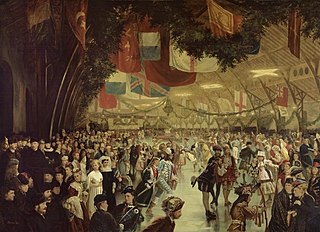 The Victoria Skating Rink was an indoor ice skating rink located in Montreal, Quebec, Canada. Opened in 1862, it was described at the start of the twentieth century to be "one of the finest covered rinks in the world". The building was used during winter seasons for pleasure skating, ice hockey and skating sports on a natural ice rink. In summer months, the building was used for various events, including musical performances and horticultural shows. It was the first building in Canada to be electrified.

The Newcastle Wildcats are a university ice hockey team representing Newcastle University in the United Kingdom. NUIHC are a member club of the British Universities Ice Hockey Association (BUIHA) and ice three teams across all three tiers of UK university competition.

On March 3, 1875, the first recorded indoor ice hockey game took place at the Victoria Skating Rink in Montreal, Quebec, Canada. Organized by James Creighton, who captained one of the teams, the game was between two nine-member teams, using a wooden 'puck'. Members used skates and sticks used for outdoor hockey and shinny games in Nova Scotia, where Creighton was born and raised. It is recognized as the first organized ice hockey game. 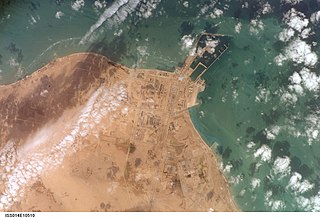 The Qatari national ice hockey team is the national men's ice hockey team of Qatar. They are controlled by the Qatar Winter Sports Committee and has been a member of the International Ice Hockey Federation (IIHF) since 18 May 2012. Qatar is currently not ranked in the IIHF World Ranking and have not entered in any World Championship tournaments or at any Olympic Games, but have only played once in the Challenge Cup of Asia Division I tournament in 2016, a regional tournament for lower-tier hockey nations in Asia.

Ice Hockey in Israel is a minor sport. Until the construction of the new arena in Holon, many Israeli hockey players were members of the Canada Israel Hockey School housed at the Canada Center in Metulla, Israel. Lately, a vast number of new hockey team (/clubs) has been created in the 'center' of Israel, most of them based on roller-hockey players, or young players which started their career in the Holon ice arena. 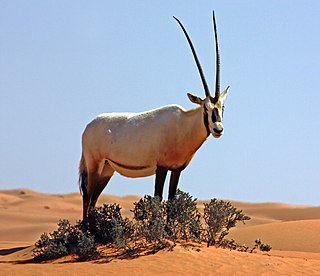 The wildlife of Qatar includes the peninsula's flora and fauna and their natural habitats. The country's terrestrial wildlife includes numerous small nocturnal mammals, a number of reptiles which mainly consist of lizard species, and arthropods. Aquatic animals primarily include fish, shrimp and pearl oysters. The desert and the shoreline form an important resting site for a number of migratory bird species during autumn and spring. Urban and agricultural developments have led to an increase in bird species.

Ice hockey at the 2017 Asian Winter Games will be held in Sapporo, Japan between 18–26 February at three venues.