The Tian Shan, also known as the Tengri Tagh or Tengir-Too, meaning the Mountains of Heaven or the Heavenly Mountain, is a large system of mountain ranges located in Central Asia. The highest peak in the Tian Shan is Jengish Chokusu, at 7,439 metres (24,406 ft) high. Its lowest point is the Turpan Depression, which is 154 m (505 ft) below sea level. 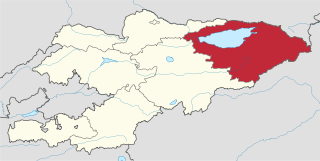 Isıq-Köl Region is one of the regions of Kyrgyzstan. Its capital is Karakol. It is surrounded by Almaty Region, Kazakhstan (north), Chuy Region (west), Naryn Region (southwest) and Xinjiang, China (southeast). It takes its name from Lake Issyk-Kul, world's second-largest high altitude lake.

Football Club Dordoi Bishkek is a Kyrgyz football club based in Bishkek, Kyrgyzstan. The club was founded in 1997.

Ruslan Dzhumbayevich Sydykov, born in a Tatar family on 4 January 1975, is a former Kyrgyzstani footballer who played as a defender for Dordoi Bishkek. He was a member of the Kyrgyzstan national football team. Sydykov won the Kyrgyzstan footballer of the year in 2005 and 2006.

FC Ala-Too Naryn is a Kyrgyzstani football club based in Naryn, Kyrgyzstan that played in the top division in Kyrgyzstan, the Kyrgyzstan League. 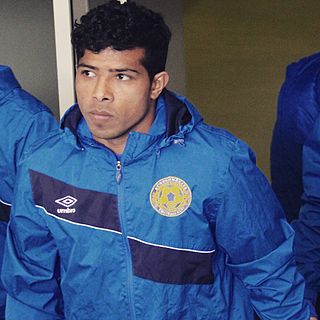 Muhammad Adil Iqbal is a Pakistani footballer who plays as a midfielder for Hawkescity F.C of National Premier Leagues NSW in Australia and the Pakistan national team. A right-footed player, he usually plays as central midfielder. Earlier in his career he primarily played as a wide midfielder. Adil is known for his dribbling skills, speed, crossing ability and his accurate right foot long-range shots from the centre of midfield.

Kaleemullah Khan is a Pakistani footballer who plays in the Iraqi Premier League for Zakho FC and the Pakistan national team. Khan plays as a midfielder or forward, and has been deployed in a variety of attacking roles – as an attacking midfielder, second striker, centre forward and on either wing. He is the first Pakistani player ever to play and score in United States and also the first Pakistan-born player ever to play against an English Premier League team. He also holds the record of being the first Pakistani player ever to score 100 career goals in club competitions. He has been praised for his positioning, teamwork and stamina, and has shown consistency in scoring and creating goals.

The 2012 Kyrgyzstan League season was the 21st edition of the Kyrgyzstan League. It started on 14 April 2012 with participation of eight teams. The new official name of the league was Top-Liga.

The 2013 Kyrgyzstan League was the 22nd season of Kyrgyzstan League, the Football Federation of Kyrgyz Republic's top division of association football. Dordoi Bishkek are the defending champions, having won the previous season. Due to sponsorship reasons the league was known as the Shoro Top League. 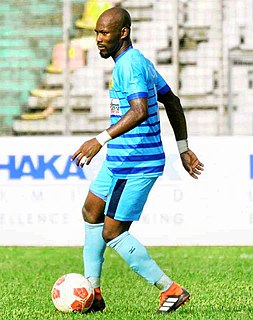 Daniel Nii Armah Tagoe is a Ghanaian-Kyrgyz international footballer who plays as a Defender for Shan United FC in the Myanmar National League. He is also a member of the Kyrgyzstan national football team.

Mustafa Guruglievich Iusupov is a Kyrgyzstani footballer who plays for Dordoi Bishkek in the Kyrgyzstan League and Kyrgyzstan national football team as a defender.