The Slohokej League (Slohokej Liga) was a multinational ice hockey league in Europe. The competition was made up from teams from Slovenia, Croatia, Serbia and Austria. A few teams in the league were the farm teams for clubs that play in the EBEL - Erste Bank Eishockey Liga (Jesenice and Olimpija). Other Slovene teams used the league for future development of young Slovenian players and had the majority of their team rosters made up from players of the age of 21 and younger.

The Austrian Hockey League is the top-tier ice hockey league in Austria, although it currently features additional teams from the Czech Republic, Italy, Croatia and Hungary.

The Slovenian Hockey League is the highest level ice hockey league in Slovenia. The championship phase is contested after the regular season to determine the national champion.

The Yugoslav Ice Hockey League was the top ice hockey league in the old Yugoslavia.

Travis Brigley is a Canadian former professional ice hockey player. He has formerly played professionally for the Calgary Flames and Colorado Avalanche in the National Hockey League (NHL).

Wade Skolney is a Canadian former professional ice hockey player. He played in one National Hockey League (NHL) game for the Philadelphia Flyers during the 2005–06 season. 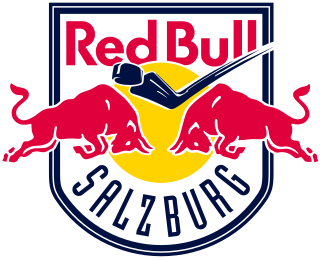 EC Red Bull Salzburg is a professional ice hockey team based in Salzburg, Austria, that currently plays in the Austrian Hockey League. The club play their home games at the Eisarena Salzburg.

Fehérvár AV19 is a Hungarian ice hockey team that plays in the Austrian Erste Bank Hockey League. They were founded in 1960 and played from 1978 in the Hungarian Országos Bajnokság I through sorts of affiliations until 2012, claiming the Championship on 13 occasions. They play their home games at Ifjabb Ocskay Gábor Ice Hall in Székesfehérvár. In 2009, the club was renamed after the main sponsor Sapa Profiles Kft Hungary, the Hungarian subsidiary of a Swedish aluminum group.

Hockey Club Bolzano-Bozen Foxes, also known as commercial name HCB Alto Adige Alperia or HCB Südtirol Alperia is an Italian ice hockey team located in the city of Bolzano, South Tyrol autonomous province, that plays in the Austrian Hockey League (EBEL). It remains the most successful team in the history of the Italian Serie A, with 19 championships.

KHL Medveščak Zagreb is a Croatian ice hockey club based in Zagreb established in 1961 that currently plays in the Austrian Hockey League (EBEL). The team's name derives from the location of its original arena in the Medveščak area in central Zagreb, with KHL the abbreviation of the Croatian words for “ice hockey club”. It is by far the most successful and popular ice hockey team in the country.

Dornbirner "Bulldogs" EC is an ice hockey team in Dornbirn, Vorarlberg, Austria, who have played in the Austrian Hockey League (EBEL), the first level of ice hockey in Austria, since 2012. The club was founded in 1992 and in 2001, began play in the Austrian National League. In their 11 years in the National League, Austria's second tier league, Dornbirn celebrated two titles in 2008 and 2010. 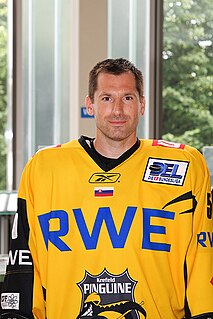 Richard Pavlikovský is a Slovak professional ice hockey defenceman. From 2005 through 2013, he played for Krefeld Pinguine in the Deutsche Eishockey Liga (DEL).

Igor Lazić is a Croatian ice hockey player currently with KHL Medveščak of the Erste Bank Hockey League. Lazić also played briefly with Team Zagreb of the Slohokej Liga. He has also represented the Croatian national team in several tournaments, at both the junior and senior levels.